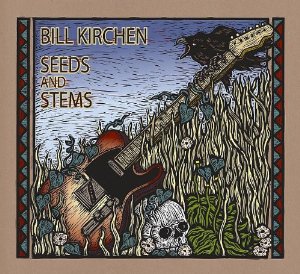 Bill Kirchen was a co-founder of Commander Cody And His Lost Planet Airmen, a band known especially for its top-ten hit, a cover of “Hot Rod Lincoln.” Since then, he’s formed his own bands including The Moonlighters and the Too Much Fun Trio, releasing many albums and keeping a heavy touring schedule. His new CD, Seeds And Stems, features new recordings of some classic material, including “Hot Rod Lincoln.”

Not only is Bill Kirchen a great musician, but he’s also clearly a music fan, as you can hear in a tune like “Flip Flop.” This album is country with a sense of humor, which I totally appreciate. For example, at the end of “Rockabilly Funeral,” he sings, “Chicks with the beehive hairdos with the bees still in them/Fishnet stockings with the fish still in them/Cashmere sweaters with the cash still in them.” And in “Mama Hated Diesels,” he sings, “Mama hated diesels so bad/I guess I knew it was something to do with Dad” (that line is sung in a serious manner, but it makes me laugh). And the CD’s final track is deliciously silly.

Seeds And Stems proves once again that Bill Kirchen has written some pretty fucking awesome tunes over the years. And this album in no way feels like a rehash or a nostalgia trip. These tracks are totally vibrant and alive.

Seeds And Stems bursts open with a country rock tune with a driving rhythm, a song called “Too Much Fun.” Bill Kirchen sings, “They finally caught me/You know what they done/Threw me in jail for having too much fun.” Yes, it’s a song about having fun, and the tune is suitably a ton of fun, complete with a nice lead section on electric guitar. This song has the energy of a live performance. “There must be a whole lot of things that I’ve never done/I ain’t never had too much fun.”

“Tell Me The Reason” is one of those country songs about a breakup. Its opening lines are “Each and every day since our breakup/I wonder if this could be the day we make up.” He wants to know why the relationship is over, saying, “Tell me the reason that you turned your back on me.” You know, I have a theory that when it comes to relationships, all men are idiots and all women are lunatics. Anyway, this song has a really nice groove.  Paul Riley plays bass on this track.

“Down To Seeds And Stems Again,” the album’s title track, is a deliciously sad country tune, a song of heartbreak, lost love and so on. Of course, the toughest thing is being basically out of pot, making everything else even more difficult to deal with. I totally understand. “Now these lonely memories, they’re all I can’t lose/And I’m down to seeds and stems again too.” This is certainly one of the CD’s highlights, with nice work on piano and guitar, and even a spoken word bit about his dog dying. “Now everybody tells me there’s other ways to get high/But they don’t seem to understand that I’m too far gone to try.”

There’s a short section in “Semi-Truck” where the bass takes the lead spot, and it’s wonderful. This is another song of woe, of a broken heart and a broken truck. Shit, what’s a country boy to do? Pop a few pills and wait it out, I suppose. This is a fun tune.

This CD features a very cool, slower rendition of “Womb To The Tomb.” I love this version. This is one you sway to, your arm around your gal, the other hand holding a beer. There is also a seriously good cover of Bob Dylan’s “It Takes A Lot To Laugh, It Takes A Train To Cry,” a song the Grateful Dead used to cover. This version is a bit slower, and totally works. This is one of the best versions of this song I’ve ever heard, with a great vibe and some interesting work on guitar. And they give themselves some space to stretch in the excellent instrumental section.  Seriously, you need to check out this track.

“Hot Rod Lincoln” is a song still does it for me every time. And this version, at nearly eight minutes, gives you something extra. This is great fun, with nods to several other musicians, all on the road with him – Johnny Cash, Roy Orbison, Buddy Holly, Carl Perkins, Marty Robbins, Buck Owens, The Ventures, Doc Watson, Iggy Pop, Bo Diddley and many others. This section might go on a bit long, but who cares, as it’s a blast. There is even a joke about The Monkees.

The CD’s last track, “Talkin’ About Chicken,” features a couple of guest musicians, Jorma Kaukonen on acoustic guitar and Johnny Castle on bass. This is a very playful, goofy, fun country tune. “I said, gal this sure is greasy but it’s mighty finger-lickin’/She said, Are you talking about love or are you talking about chicken?” Does the song’s title answer the question? Well, he’ll get a taste of one or the other before the night (or the song) is through.

The main group is Bill Kirchen on guitar and vocals; Jack O’Dell on drums, percussion and harmony vocals; and Maurice Cridlin on electric and string bass. Joining them are Austin de Lone on piano and organ, Louise Kirchen on harmony vocals, and Micky Kemp on harmony vocals. Garry Walsh plays organ on “Mama Hated Diesels.”

Seeds And Stems was released on June 18, 2013 on Proper Records.

Posted by Michael Doherty at 1:18 PM