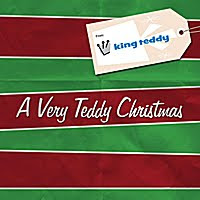 I've long had mixed thoughts about bands feeling some bizarre obligation to record and release Christmas songs. Are they all truly overcome with the spirit of the season and a genuine need to express it? Or, as my more cynical self thinks, is it a weird way to cash in? After all, this is the season to cash in. But then why shouldn't musicians get in on the act? Why should Wal-Mart and Toys R Us get all the action? The thing is that in the midst of so many holiday jingles, some good tunes find their way into existence. And so why knock the process? Sure, it's a pain to sift through all the horrible songs to find those few nuggets, those rare gems, but maybe it's worth it.

This year King Teddy has released an EP of Christmas songs. There are only three tunes, rather than an entire album, so the band seems more focused on putting out some good tracks instead of trying to fill an LP with holiday cheer. I dig King Teddy, with its mix of country swing, early rock and roll, and rockabilly. And clearly they're not taking themselves too seriously, as shown by their choice of title, A Very Teddy Christmas, bringing to mind The Brady Bunch. No, this is a band that's having a good time, and wishes to share it with you.

The first two tracks are originals.

"Could It Be Christmas?"

The EP opens with "Could It Be Christmas?" which is definitely cheesy in sentiment ("Could it be Christmas that I feel?"), but has a fun, positive vibe musically. It's one of those songs that will be perfect if you're in that holiday swing and feeling happy about it, but that might make you want to aim a rifle at reindeer if you're feeling stressed out or depressed about the season. It's all about being happy despite terrible weather and the frantic pace and the shopping and all. It begins, "There's snow in my hair, and overshoes on my feet/I'm making my way through yesterday's slush and sleet/And even despite the specter of freezing rain/I'm warm in a way the weather man can't explain." The bridge, approximately two minutes in, is by far the cheesiest section of the song.

I much prefer the EP's second track, the slower and sweeter "Christmas Eve Tonight." The piano has an early rock and roll feel, and there is a cool saxophone solo that refrains from straying to allusions to other Christmas songs. Hurrah for that! And the vocals sound great. Here is a taste of the lyrics: "Childhood wishes/Childhood memories speak from long ago/Crystal snowflakes softly falling/Footprints in the snow/All your troubles, let them be/Lay them out of sight/Let it snow on Christmas Eve/Christmas Eve tonight." Simple, but nice. This isn't one of those ridiculously overly happy Christmas songs. And I dig the bass line.

The EP concludes with a cover of the classic "Winter Wonderland." And this is a great early rock and roll-style rendition, done as an instrumental, the saxophone doing what would be the lead vocal line. This is one of the best versions of this song I've ever heard. It's just pure fun, and is almost enough to put me in the holiday spirit. I love the section that is just drums and saxophone.

A Very Teddy Christmas is available as a download. Last year King Teddy released its debut CD, Stirred And Shaken.
Posted by Michael Doherty at 1:08 PM