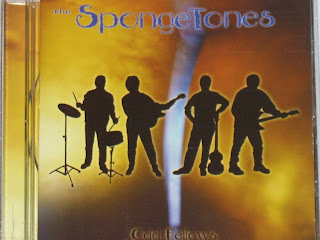 The Spongetones are a pop band that formed in 1979 in North Carolina. They've been releasing power pop records since the early 1980s, and their music is clearly influenced by The Beatles. This band is best when doing a sort of 1960s pop thing, and weakest when straying slightly into harder rock (like on the album's last track). Odd Fellows followed five years after their previous studio release, Textural Drone Thing. Most of the songs on this release are originals, the one exception being "On The Wings Of A Nightingale," which was written by Paul McCartney and originally recorded by The Everly Brothers.

Odd Fellows opens with "You'll Come Runnin' Back," which has something of a 1960s pop feel, but also with folk elements, most obviously the inclusion of harmonica. The best bit is that guitar part that follows the line, "You'll come running back." It's totally catchy, and breaks up the pop feel just long enough to be interesting without completely changing the tone of the song.

This is a good opening track. It was written by Jamie Hoover. Here is a taste of the lyrics: "A shiver crawls through me til I realize/This misery's part of an act/You've said it's over, but darlin' I know/You'll come runnin' back."

"Boy Meets Girl" also has a definite 1960s pop feel. It's fun, harmless music (and isn't that what pop does best). These lines caught me off guard, and made me chuckle: "Girl meets boy, happens all the time/Girl meets boy, I can make it rhyme." I love that it acknowledges the commonness of the song's theme, and yet simultaneously has a bit of silly boasting. I totally appreciate that levity.

As noted, "On The Wings Of A Nightingale," the album's sole cover song, was written by Paul McCartney. It's ridiculously positive and boppy. It features lines like, "And if you like, we'll fly together to the land of eternal sun/On the wings of a nightingale of love." This song was a minor hit for The Everly Brothers (it reached #50 on the U.S. chart, and #41 in the U.K.). It was included on their 1984 release, EB 84 (Paul McCartney recorded a demo of it, but did not officially release it.)

The following track, "Dark Brown Eyes," really sounds reminiscent of Paul McCartney, particularly in the vocal line. It sounds even more like McCartney than the song that Paul actually wrote. It has those pleasant, sweet tones that sound so innocent and young.

"March Of The Creaming Beezers"

"March Of The Creaming Beezers" is an instrumental track that begins with a march rhythm on the snare drum. The song fades in, and builds, with new parts being added to it (even a nice whistling). What's surprising is the track's beauty. Something in the repetition becomes soothing, even joyous. I found myself really loving this song; it might actually be my favorite track. That's Greg James on the snare drum. (By the way, "beezer" is British slang for "chap." It also means "nose.")

Someday I'm going to make a mix CD containing only songs titled "Home." There are some really good ones, like those by The Evangenitals and Ellis Paul. The Spongetones also have a tune titled "Home." While it doesn't quite stack up against the Ellis Paul song, for example, there is a verse I particularly like: "Each day's another page written in ink/Another footnote appears in the link to a/Place I can go to fill in the blank/Each line is written inside of a novel called home." But this song also has the line, "It's a cliche, but there's no place like home." If you acknowledge a line as a cliche, does that make it okay to use it? I'm not sure.

"Nightsong" is one of the album's best tracks. I really like its rhythm, and the way the vocal line works in conjunction with it. But it's the instrumental sections that really make the song a highlight for me. "Nightsong" was written by Steve Stoeckel.

Okay, I really like this line: "Wearing her heart just like a stain/On a velvet gown." The song is worth listening to for that line alone.

"Much Too Slow" starts like a hard rock song. This band is weakest when straying into that territory. They can't quite make it work. There is a certain charm in their 1960s pop melodies, but they lose that when attempting straight rock.

Odd Fellows was released on June 20, 2000 through Gadfly Records.
Posted by Michael Doherty at 1:39 PM