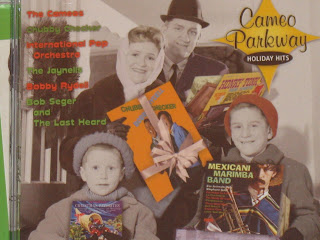 As you're probably well aware, it's difficult to find good Christmas music. There are some good tunes ("Merry Christmas, Baby," "Christmas Wrapping," "Father Christmas" and of course "Fairytale Of New York"), but most of the songs associated with the holiday are just plain awful. So for those of us who wish to fill the day with music (that is, good music), it takes a bit of searching. This new compilation will add a few more songs to your holiday play list. Though oddly (or perhaps tellingly), the two best tracks are both versions of "Auld Lang Syne," which of course isn't a Christmas song at all. But those two tracks really make this a CD worth owning.

Of the other tracks, the original songs are the best, particularly "Merry Christmas" by The Cameos and "Donde Esta Santa Claus" by Toni Stante. Those are definitely going to be added to my holiday play list.

Half the songs on Cameo Parkway Holiday Hits are instrumentals, many of them done by Rudolph Statler Orchestra and International Pop Orchestra. And no, I hadn't heard of those groups either.

This CD was originally scheduled to be released last year through Collectors' Choice Music, and now is finally seeing a release through the new Real Gone Music.

This compilation features two songs by Bobby Rydell and Chubby Checker. The first, "Jingle Bell Rock," is the opening track, and is one of those classic Christmas songs that's actually pretty cool. This version is from 1961, and actually reached #21 on the Billboard Hot 100. It's the saxophone part that really works, though the section right after it in which they trade off lyrics is a bit annoying. But pay attention, and you'll hear a reference to Chubby Checker's "Pony Time," which was also released in 1961.

Their second song, "Jingle Bells Imitations," is an odd tune, in which they do a series of impressions of their contemporaries doing "Jingle Bells." They imitate such folks as Elvis Presley, Bobby Darin and Fats Domino. The results are slightly amusing.

Rudolph Statler Orchestra contributes three tracks to this compilation, all instrumentals. The first, "Santa Claus Is Coming To Town," is only a minute long, which is just about the right length. The second, "Winter Wonderland," is more fun, with a bit of a big band swing thing happening. Their version of "Let It Snow, Let It Snow, Let It Snow" is playful and enjoyable.

The other orchestra, International Pop Orchestra, has four tracks on this CD, making it the most represented group on the album. This orchestra's contributions include a fairly nice version of "Joy To The World." I really like the string arrangement on that track. Their version of "Hark! The Herald Angels Sing" isn't that interesting. Nor are their renditions of "The First Noel" or "Deck The Halls," the latter feeling incredibly sluggish.

"Merry Christmas" is one of the compilation's best tracks. It's an original tune performed by The Cameos. It was recorded in 1957, and has that great 1950s rock vibe and fun backing vocals. This is a song for your Christmas sock hop. (And come on, you totally want to host one, don't you?)

The Cameos provide another of this CD's best tracks in "New Years Eve," which was also recorded in 1957. Again, it's the goofy backing vocals that really make this track work. And then it has an excellent sax solo. You can't go wrong with a sax solo in a 1950s rock and roll tune.

As I mentioned earlier, the two absolute best tracks on this CD are both versions of "Auld Lang Syne." The first, by Beethoven Ben, has an old-time parlour-type sound that is completely and utterly wonderful. I love this track. Every time I listen to it, I can't help but smile and think that life is pretty damn great. I'm guessing you'll have the same reaction. The perfect song to bring in the new year, just as it's intended to be.

But my favorite track on this disc is the second version of "Auld Lang Syne," done by Bob Johnson And The Lonesome Travelers. It's a wonderful bluegrass instrumental version that you just have to hear. Bob Johnson's banjo work is flawless and joyous. And Norman Blake is excellent on mandolin. This song was originally released on Twelve Shades Of Bluegrass in 1963, and feels like it hasn't aged at all. I love this song.

One of my favorite takes on a traditional Christmas song is Simon & Garfunkel's "7 O'Clock News/Silent Night," from their Parsley, Sage, Rosemary And Thyme record. In that song, they sing the main part of "Silent Night" over a simple and yet beautiful piano part. As they sing, a news report begins playing. And of course, as it was the mid 1960s, the news is about the Vietnam war, civil rights, and anti-war demonstrations. The juxtaposition of the news with the beauty of Simon and Garfunkel's voices is incredibly effective.

On Cameo Parkway Holiday Hits, there is a track titled "White Christmas (3 O'Clock Weather Report)," which is a sort of parody of the Simon & Garfunkel song, and the results are tacky and icky. But it's not just that. The song begins with some spoken word with a guy pretending to be Senator Robert Kennedy. He's trying to figure out how to reach the students. So the other guy suggests hiring "Bobby the Poet," who is of course Bob Dylan. Well, someone pretending to be Bob Dylan. So we get someone pretending to be Bob Dylan doing "White Christmas." Awful. But then over that the other two guys continue to talk, saying such garbage as "He talks funny" and "That's poetry?"

If that's not bad enough, then the weather report begins to play over the song, with a listing of temperatures of major cities of the U.S. (thus poking fun at the Simon & Garfunkel song). This is honestly one of the most obnoxious songs I've ever heard.

A much better tune is The Jaynells' "I'll Stay Home (New Year's Eve)." It's one of those sweet and slow early 1960s love songs. This tune was recorded in late 1963, and features Curtis Mayfield on piano.

Who would record an instrumental version of "Twelve Days Of Christmas"? Apparently, the Mexicani Marimba Band would. It's such an odd song to do as an instrumental, because whatever charm this song might be said to possess is due entirely to the lyrics (and in trying to remember them all as you get toward the end of the song). As an instrumental, it's just so repetitive. And this is the longest track on the CD. It seems like they should have reached twelve long before they do. I think the cruelest form of torture would be to program someone's CD to endlessly repeat this track.

Toni Stante's "Donde Esta Santa Claus" is a seriously fun and silly tune. This is one I had never heard before, and instantly loved. There is a section that is just completely wonderful, where she sings, "I hope he won't forget/To crack his castanets/And to his reindeer say/Oh Pancho, oh Vixen, oh Pedro, oh Blitzen, Ole, ole, ole." Wonderful, wonderful, wonderful. This is a song to brighten everyone's holiday, and is one of my new favorite Christmas songs.

This compilation concludes with a real rock and roll song done by Bob Seger And The Last Heard. Yes, long before The Silver Bullet Band (and even before The Bob Seger System), Bob Seger had a band called The Last Heard. And with that band he recorded a Christmas song titled "Sock It To Me Santa." This song freely borrows from James Brown's "Papa's Got A Brand New Bag," but it's a lot of fun and you get the feeling that James Brown wouldn't mind at all.

Plus, it has some silly lyrics like "Come on, Comet/Come on, Cupid/Don't just stand there, looking stupid" and "He lost a little weight but his jelly still rolls." Christmas should be a fun time, and this song will certainly help toward that goal.