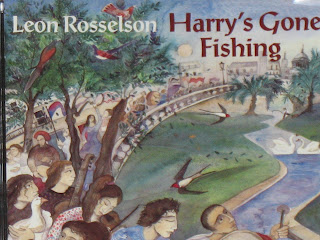 Harry's Gone Fishing, Leon Rosselson's 2000 release, opens with the lines, "They ask me if I think that I can change things singing songs/Am I propagating messages, protesting against wrongs?"

Right away, this singer/songwriter is posing the question, Can music change things? Can it effect true change? And should it? Or is the song itself the goal as well as the process? And what is the purpose of the songwriter anyway? It may seem a bit of a heavy way to start an album. But this album is no trivial bit of fluff. It will get you thinking, and that's a good thing.

But of course any folk musician or writer who tackles social issues and such had better have a sense of humor. Because otherwise folk albums can be dreadfully dull and heavy-handed. Fortunately Leon Rosselson has a fantastic sense of humor, and it comes across in even the most serious of songs.

All but one song are originals.

The opening track, "It's Just A Song," is a strange mix of humor and gravity. It's funny and yet earnest, even beautiful. The keyboard and backing vocals add a beauty to it, greatly changing the tone during those sections. It's a self-aware song about writing songs, about what music can actually accomplish - a singer singing the purpose of singing. And yes, it could get self-indulgent, but manages to avoid that. And though it opens with the question about changing things through song, a few lines later he answers, "As for preaching and converting, that's not what songs should do."

"Harry's Gone Fishing," the album's title track, creates a great character and a strange longing. The setting of this song is a place that's gone wrong. And the folks there look to the past as a better place. And they look to Harry, a personified version of the can-do spirit, which is sadly in the past.

Leon sings, "And he said, Harry could have done it/Cos he could put right every wrong/He could turn sighs into silence/He could turn silence into song/He could turn frowns into laughter/He could turn lost into found." But it has a positive spin toward the end, at the line, "And the banners they were waving said Harry Lives On." And because Harry is of the past, and not adequately identified, the great character of this song is the present community rather than that person.

In the short introduction to this song in the CD's liner notes, Leon Rosselson says, "I don't know why mercenaries so often get a bad press. After all, they're only doing what everybody else is doing - selling their skills in the market place."

This song features the following lines: "Now they say that it's fine if you fight for your country/For right against wrong - well that's shite/War's war and it's nasty, my aim's to survive/At the end of the day, if I come back alive/That's how I'll know that I'm in the right." This is a pretty amazing song. What I love is it's not a song about Them - you know, those bastards we can all hate. It's about Us - you know, the bastards we're actually responsible for.

I love the title "Money Matters," for is "matters" a verb or noun? Yes. For the song is about money matters, and shows how money matters.

Here is a bit from the song's third verse: "Artist, anarchist and joker Pierre Manzoni thought it smart/To lay his well-formed turds in cans to show his scorn for bourgeois art/Now his turds are in demand and each can sells for twenty grand." Those lines are funny, but they raise one of those eternal questions about an artistic statement. As soon as it becomes known and popular, which is the goal (because you want to reach people), the original message is then lost and becomes simply another part of pop culture, and (even worse) goes from the hands of the people to the vaults of the rich. How can that be avoided?

By the way, Piero Manzoni (I'm not sure why he's referred to as Pierre rather than Piero in the song) made ninety of those cans in 1961. And recently one sold for $80,000.

This song can be horrible and yet funny simultaneously. You feel a bit gross laughing at lines like, "Healthy organs fetch a packet when it is a sellers' market." It's great how Leon Rosselson can do that.

This one is truly played for comedy. What I find odd is that a song called "Bad Driver" is about a man, not a woman. But maybe I'm just kidding myself, because I can see myself in a couple of these lines ("And he's cursing all the cars that are holding him up cos they shouldn't be allowed on the road"). You'll probably recognize yourself too. Enjoy.

"Child Killers" isn't about adults who kill children; it's about children who are killers. Think Columbine. It's sung from the perspective of one of these children. Here is a taste of the lyrics: "They teased and taunted so they had to pay for it/They didn't know there was this other me/I held the gun the way they'd always taught me to/I was this other boy, the one they couldn't see/And this was something he just had to do." I love that he distances himself from his own act, suddenly retreating to the third person.

"You Noble Diggers All"

"You Noble Diggers All" is the album's only cover, written by Gerrard Winstanley. This recording is from the 1979 record, If I Knew Who The Enemy Was, an album put out by Roy Bailey and Leon Rosselson. (On that recording, it was titled "The Diggers' Song.")

The Diggers were a reform group started by Gerrard Winstanley in the mid-1600s in England. This group was an influence on the San Francisco Diggers of the 1960s.

Harry's Gone Fishing concludes with a humorous song, which is again (at least partially) about being a songwriter. It ends with these lines: "I've been writing songs for over 35 years but I don't seem to have got very far/I've never been nominated for a Nobel Prize and I can't say I'm a superstar/But thanks all the same for listening to me and my guitar/I'd've sung you all upbeat feel-good songs but you know how things are/You know how things are." And wonderfully, he laughs just before the last line. This song features Leon on guitar and vocals, with no other musicians.

Harry's Gone Fishing was released on September 12, 2000 on Gadfly Records.
Posted by Michael Doherty at 3:38 PM