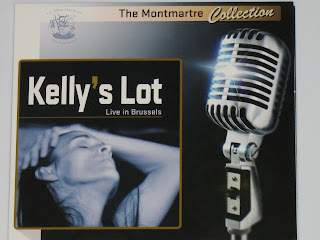 Kelly's Lot is an excellent blues-rock band based in Los Angeles, and fronted by Kelly Zirbes. They've put out several albums, but the way to truly experience this band - and Kelly's voice - is in concert. So I was really excited to hear they were putting out a live album. And this collection does capture the spirit of this band.

Yes, this band is all about the blues, but it's their own brand of blues - it's like Positive Blues. Take a song like "Taking Time" for example. This is no poor-me type of blues. And even when things go wrong for the characters in these songs (and of course things do go wrong - this is the blues, after all), it's not like they're victims. How could you consider the protagonist of "Better Way" a victim? And certainly the singer of "Pistol" can take care of herself.

A lot is said about Kelly's voice, and with good reason. But what also needs to be clear is that these guys are excellent musicians. Without ostentatious stage antics or any nonsense, these guys really PLAY. You know? Perry Robertson has often blown me away when I've seen him perform. Also, these guys clearly love what they're doing. You can see it in their smiles; you can hear it on all of these tracks.

This is the best album the band has put out so far. Seventy minutes of excellent blues-rock. With one obvious exception, all the songs on this release are original songs, written by singer Kelly Zirbes and guitarist Perry Robertson.

"Reason For The Blues"

The opening track, "Intro," is simply Kelly thanking the audience.

Then the band jumps right into a groovy blues number called "Reason For The Blues." Kelly has a great voice for blues and rock. It's rough and powerful - you get the feeling she could bruise you with it if she so desired. Kelly really demonstrates her vocal chops when she gets to the lines, "'Cause you're hard like candy/Sweet like wine/I can't help myself every time."

And then there is some great work on guitar by both Rob Zucca and Perry Robertson.

Kelly introduces "Taking Time" by saying, "Here's a new song. I call it 'Coffee.' Or, 'Taking Time.'" I love it when bands introduce new material in a live context. With the title not even firmed up, you get the sense you're experiencing something in development, which is always exciting. And this one is an immediate favorite. Kelly sings, "Well, I'm taking time for love/I'm taking time for you." This song also has a good little jam.

"Redbone" is my favorite tune from the band's 2008 release, The Light. This song has a seriously cool groove. And this live version is a lot of fun. I love Matt McFadden's bass line.

"Crossroads" is the album's sole cover tune. Kelly's Lot does a fast-paced, high-energy rendition of this classic tune written by Robert Johnson. The band is clearly influenced by Cream's version. While Kelly's voice is electrifying, it's actually the instrumental section of this track that really sells it.

"Tired" has that familiar traditional blues rhythm and groove, something the previous tracks have stayed away from. The band doesn't rely on it. But it's welcome here - it works. Listen to that great pain in Kelly's voice when she sings, "I'm lost, I'm so lost." And there is a nice extended guitar section. The band really stretches out here - this song is ten minutes long. Kelly is not afraid to step aside and let the band cook on its own for a while.

Kelly's soft, simple intro, "This is called 'Pistol,'" does nothing to warn you about the groovy, kick-ass song that follows. This song really caught me by surprise. Check out these lines: "I got my knife sharpened/I'm not ready to see you bleed/Make sweet love to me, and in the morning we'll see."

When folks talk about Kelly's voice, one of the comparisons that is often made is to Janis Joplin, in terms of the raw power and sexiness. Kelly included her version of Joplin's "Mercedes Benz" on the band's 2009 release, Pastrami & Jam. In introducing "Take This Heart," Kelly says, "I kind of tried to channel her...This song is about what I think she would be saying if she were still out there performing." (That introduction is presented as a separate track, titled "Homage To Janis Joplin.")

It begins, "Take this heart/Take it away from me/Take this soul." Of course the allusion is to one of Joplin's most famous songs, "Piece Of My Heart." My favorite lines from "Take This Heart" are, "Because baby you've taken the best of me/So why don't you just take the rest of me."

Live In Brussels was released July 15, 2011. It was recorded at The Montmartre.
Posted by Michael Doherty at 4:49 PM