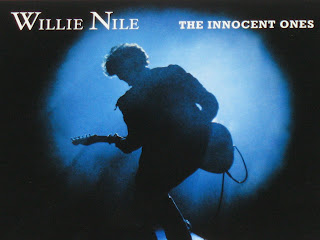 For those who are unfamiliar with Willie Nile, his new album The Innocent Ones might very well be the record to bring you aboard, to add you to the ranks of his fans (putting you in the company of Lucinda Williams, Richard Thompson, Roger McGuinn and Pete Townshend). Willie Nile opened for The Who in 1980, and has played with Bruce Springsteen, so of course is no stranger to great rock and roll. And this is a great rock and roll album (though of course there are singer/songwriter and even punk elements mixed in). All of the songs are originals, written by Willie Nile and Frankie Lee ("Sideways Beautiful" was written solely by Willie Nile).

This album features some excellent lyrics. Willie has a few things to say, but he's not trying to knock you over the head with a message. Of course, if you happen to think while dancing, then all the better. But this CD is actually a lot of fun. And my favorites are deep cuts, so be sure let the whole CD play (don't just download a few songs, because you'll be cheating yourself out of some fantastic tunes).

The album's first track, "Singin' Bell," begins with slow church bells, reminding me of AC/DC's "Hell's Bells." But then after a few seconds of that, right when you think that this will be a somber song, it kicks in with a tremendous burst of energy, and doesn't let up. This is rock and roll, using the genre's elements - a driving beat, lively vocals and a memorable guitar line - to great effect. It even breaks down to vocals and drums for a moment (but with a bit of guitar as well). There is a joy to the performance that is palpable.

The opening lines are, "Oh can you hear that singin' bell/A voice so clear, a tale to tell." Perfect lines with which to start Willie Nile's new album.

"One Guitar" begins with those timeless insightful philosophical pop lyrics: "Na na na na-na na-na-na-na." And yes, it's catchy. This song is about the idea of musicians being soldiers in a different kind of army (a much better one, of course; after all, very few people have been killed by a guitar). This idea has been around for a long time - the power of a single person with a guitar. I remember Ellis Paul talking about it in one of his first interviews back in the late 1980s. It's a good message, and this is still a fun song.

The chorus is "I'm a soldier marchin' in an army/Got no gun to shoot/But what I got is one guitar/I got this one guitar." Stewart Lerman plays electric guitar on this track.

"The Innocent Ones," the title track, begins with a more serious tone - both musically and lyrically. The first verse is "Driven from the center right out to the edge/Miserable and desperate, standin' on a ledge/What was on the inside is now completely out/Nothing is for certain, everything's in doubt." But with the chorus comes a brighter feel, helped by the backing vocals. Both the verses and the chorus are sung with a wonderful earnestness and power. Willie is giving everything to you here. But for me it's the joy in the chorus that makes the serious tones of the verses more palatable and effective.

"My Little Girl" feels like a mid-1960s pop song (you could imagine a group like The Beach Boys covering it, or it being included in a film like That Thing You Do!).

"Topless Amateur" has the feel of a straight-forward rock tune (something in the guitar line and the simple drum beat brought early John Cougar to mind). But the lyrics are something else again. The first line is, "She was a topless amateur and a hundred dollar fur was the prize." And then later Willie sings, "For a country made of cheese there's an awful lot of ham on the wall." That line gets me every time.

"Rich And Broken" is one of my favorites from this CD. It's fun and catchy and, yes, even sweet in an odd way. And humorous. Whoever thought the simple and common line "and she's mine" could elicit such a big laugh? And every time it's repeated, too. Check out these lines: "You might catch her disappearing/Beneath the weight of all the praise she's hearing." And these: "A voice is never too far from her head/But she ain't heard a single word you said." I absolutely love this song.

Hirsh Gardner plays parade drum on this one.

"Can't Stay Home" is a great punk tune. And a love song to boot, as Willie sings lines like, "But when I see her on the street the sidewalk melts from all that heat." This song is pure fun, and it's one of my two favorites from this release (the other being "Rich And Broken"). And he goes back to that always-pertinent, always-reliable lyric, "Na na na na na na na na."

I love that Willie follows the punk song with the most stripped down, bare song of the album, "Sideways Beautiful." We're deep in singer/songwriter territory here. There's even harmonica on this one. And again, the lyrics have a lot to offer. Here is a taste: "Your crooked smile's a lemonade stand refugee/Standing on the corner giving it away for free." I love the title, the image of "Sideways Beautiful."

The Innocent Ones was released on October 11th, 2010 in Europe. It will finally be released in the United States on November 22, 2011 on River House Records.
Posted by Michael Doherty at 5:21 PM