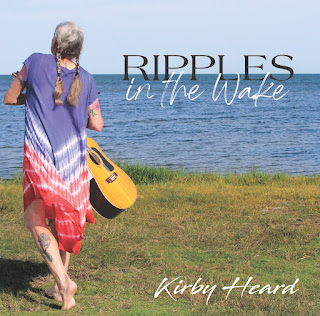 In 2012, Kirby Heard and Bob Hight formed Bob & Kirby’s Double H Bluegrass Band, releasing their first album, Pieces Of A Dream, four years later. That album included a couple of Kirby Heard’s original compositions. Then in 2019, Kirby Heard released her first solo album, Mama’s Biscuits. The singer and songwriter has now followed that with Ripples In The Wake, which features all original material. The album was produced by Jon Shain, who plays guitar and mandolin on many of its tracks. Several other musicians join Kirby Heard on various tracks.

The album opens with “Angel Wings,” a song of loss and memory, featuring a gentle, friendly, and loving vocal performance. Here is a taste of the lyrics, lines that had me in tears: “It’s hard to face this solitude/I see your footprints by mine/They fill with seawater, then disappear/So you’re swept from me again.” This song is so pretty and sad, yet hopeful, particularly at the end when she sings, “Like the tide, I will recover my strength/Like the sun and the moon, I will rise.” Life goes on, doesn’t it? Kaitlin Grady adds some beautiful work on cello. That’s followed by “Grab The Lightning,” which has a more cheerful folk sound, featuring Bob Hight joining her on mandolin. “We speak with no words/We fly without wings/When we grab the lightning/I hear her heart sing.” This song is from the perspective of a horse. “We’re a powerful pair when we’re unleashed.” Laurelyn Dossett provides some pretty backing vocal work.

“I Was Never A Child” is one she delivers a cappella, her voice having a timeless quality, this track able to stand among classic folk numbers. It is not hard to imagine this song appearing on an early Joan Baez record, for example. “Threads of memories, frayed and worn, rally to survive/Empty days of loneliness/I was never a child.” Then “Somebody’s Someone” is a song about how every death affects someone, something to keep in mind when watching the news. Every story is part of someone’s life. “We’re all somebody’s someone/We’re somebody’s someone in somebody’s life/A parent, a child, a mentor, a wife/We’ll be somebody’s someone right to the end.” That’s followed by “Mandy Jane,” a song about family and memories, recalling a lost parent with love. This track features some beautiful work by Alice Hasen on fiddle.

“Sweet Days Of Summer” has a gentle, soothing sound, creating a sweet atmosphere and leading us into it. “We’ll hold each other ‘til dawn/Then rise with the sun/Begin a new day/Tangled sheets left behind/Like vines in the field after our take.” This track contains some nice harmonies, with Barry Gray joining Kirby Heard on vocals. This song is interesting, in that it looks forward to looking back at this time in memory, and it will likely call up some of your own memories, help you relive and cherish certain times. That is followed by “Liberty,” a timely song featuring Kaitlin Grady on cello. Since 2016, we’ve recognized that democracy is vulnerable, that tyranny could hold sway, and does, over millions in this country. “Divisiveness left in the wake/Tyrants cheer/Frail democracy may break/Huddled masses fear.” But this experiment is not yet over. In 2020, the sane and the good outnumbered the heartless and the stupid at the polls, which was a relief. However, many foul creatures retained their positions of power, working at tearing at liberty from within. The struggle continues.

The music then turns cheerful and lighter, more lively, with “(That’s What Makes) A Bluegrass Song.” And indeed, this one is in the bluegrass vein, and features some nice work by Julie Elkins on banjo. This delightful number celebrates bluegrass music and the musicians who play it, and contains references to several familiar bluegrass names and themes. Jon Shain delivers some great stuff on guitar and mandolin, while Joseph Decosimo adds some sweet work on fiddle, and FJ Ventre keeps it all moving on upright bass. Laurelyn Dossett and Jon Shain provide backing vocals. FJ Ventre then moves to piano for “Halfway There.” But this one begins with Kirby Heard’s voice unaccompanied. “So many lives in war and peace lost to bullets, disease, police.”

“Under The Maple Tree” is another song dealing with loss and memories, this one about losing someone to war. “Now my arms are empty/My heart’s been denied/Since you went away/The sting of loneliness won’t subside.” This track features some heartfelt work by Bill Newton on harmonica. That’s followed by “Ponderings (Do You Know?),” this one also about gun violence and war. Each verse presents a different situation, the first being the Civil War with brothers on opposing side. The second is about someone in the National Guard in 1970 at Kent State, and the third is about a police officer shooting a child. The song addresses those who fired the shots, wondering what they knew, and asking if another choice could have been made. Kirby Heard delivers a passionate vocal performance, and Joseph Decosimo provides some moving work on fiddle.

“Better This Way” is a song about a relationship that has run its course, and so it too deals with memories. “We let our spirits be free/I relish the memory/And keep in mind what was left behind/It has to be better this way.” Perhaps, but there is a bit of darkness to this song’s tone. Jon Shain plays acoustic guitar and resonator guitar, and FJ Ventre is on upright bass. That’s followed by “Maggie’s Song,” a song taking place in the 1880s when children were sent to work. This song is about family and responsibility, about death and moving from home to a new land. Its final lines are delivered a cappella. “Mama died when I was nine/I’ll ne’er forget her smile/My young one had her same smile from the start/Though I had traveled on and left our family home/Scotland will e’er be in my heart.” The album concludes with “My Body My Voice,” addressing a topic that sadly is still current thanks to the illegitimate Supreme Court and the bastards of the Republican Party. The story of this song begins with a rape, and the consequences for the woman, not the criminal. It also touches upon the hypocrisy of the so-called “pro-life” people, who of course care nothing for the child once it is born. This song features another passionate vocal performance.

Posted by Michael Doherty at 8:35 PM