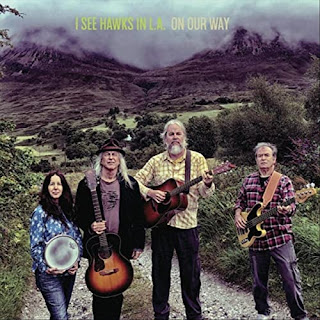 During this crazy time, like most people, I’ve been yearning to see some live music. And one of the bands I’ve missed most is I See Hawks In L.A. Going to one of their concerts is like hanging out with your best friends. Their music always seems to break whatever dark clouds might be hovering above or within. And so this is a band I’ve wanted to turn to throughout this perverse period, when nearly half the nation is still under the spell of a crooked and racist game show host, when people refuse to trust a vaccine but have no qualms about taking medicine for de-worming horses, when twisted congressmen liken violent insurrectionists to tourists. Things are positively bizarre out there. We desperately need I See Hawks In L.A. to help balance things out. Well, these guys used the time of isolation to put together a fantastic album, On Our Way. And, yes, they did it remotely. On Our Way features all original material, and on some of these tracks the band gets some help from special guests, including Brantley Kearns and the guys from Double Naught Spy Car. The band is made up of Rob Waller on vocals, guitar and synths; Paul Lacques on guitar, lap steel, autoharp, mandolin and backing vocals; Paul Marshall on bass and vocals; and Victoria Jacobs on drums and vocals.


They open the album with a cheerful and pleasant-sounding country tune titled “Might’ve Been Me.” This is exactly what we need. This song has a familiar sense about it, like a song that is already at home in our ears, and so able to ease us away from the current troubles. Rob Waller’s vocal approach has that warm and friendly sound that makes his voice one of the absolute best in music these days. This track features some wonderful work by Dave Zirbel on pedal steel. “Don’t feel bad, he’s not mad, he’s just insane/Standing in the torrential rain.” That’s followed by the album’s title track, “On Our Way,” which has an easygoing vibe. “Winter comes, and we sleep all day/I don’t know if the spring is coming/All I know is I’m on my way.” Those lines are followed by a line many of us can relate to: “Growing old and you’re waiting for wisdom.” One thing that often strikes me about these musicians is the way they seem to easily connect with their audience, and on a level that is beyond what the lyrics convey, like they’re meeting us in some unidentified and universal place that they have staked out. “All we know is we’re on our way.”

“Know Just What To Do” opens with some exciting and interesting work by Brantley Kearns on fiddle. I am always so happy to hear him play. After that, the song kind of eases in with some sweet work on acoustic guitar, and it features an absolutely beautiful vocal performance. “Stars are shining/Your love is blinding/I’m coming home to you.” This is a wonderful song, an immediate favorite of mine. There is something soothing about this song. It is such a relief to hear this music that I ended up in tears the first time I listened to this track, I don’t mind admitting. Though it is Rob Waller’s voice that is at the heart of this song, this track also features some glorious and strange instrumental sections, and I love the way things slide back into those sweeter sections from there. Richie Lawrence adds some nice work on accordion on this track. Then “Mississippi Gas Station Blues” comes on heavier. This is an unusual and surprising one, and the lines are delivered as spoken word. “You don’t have to love me, but you’re gonna have to choose/The name in my heart, the name on my chest/Is standing in the doorway, and she wants to confess.”

Victoria Jacobs takes a turn at lead vocals for “Kensington Market,” which she wrote. This is a completely enjoyable song, in large part because of Victoria’s vocal approach and style, which brings to mind certain singers of the 1960s. This is a sweet and mellow trip. It’s followed by “Kentucky Jesus,” a song about Muhammad Ali’s stance against the draft. Here are the opening lines: “He threw his medals in the river/He took on the war machine/He did not bend, in fact he floated like a bee” (the last a play on his famous line, “Float like a butterfly, sting like a bee”). They follow that with another song about an influential figure, “Geronimo.” “I’m not retreating, I’m considering direction.” This track features more good work on pedal steel.

“Stealing” is a beautiful and gentle song that reminds me a bit of Gordon Lightfoot at moments. Old Californio’s Woody Aplanalp and Rich Dembowski join the group for this one. “Ain’t no heaven, no burning hell/Just a boat across a troubled sea with no fortune to tell.” This line also stands out: “But I don’t mind running if you’ll say you’ll run with me.” There is also some humor to this song, in the lines “Come October, we’ll be sober/Come November, we’ll remember,” which made me laugh out loud the first time I heard them. That’s followed by “If I Move,” which also shows the band’s sense of humor. Check out these lines, which opens the song: “Drove by the McDonald’s where we decided not to get married/And the Denny’s where we said what the hell/There’s the parking lot where you told me you were pregnant/I’m beginning to know this town too well.” Dave Zirbel contributes more good work on pedal steel here.

Even before its excellent and apt opening line, “It’s never been easier to lose your mind,” I am totally digging “Radio Keeps Me On The Ground,” with that cool rhythm. “There’s never been a lonelier time” is another line that speaks to our experiences during the pandemic. And soon the band promises us, “And this will pass by and by.” Ah yes, but when? Music has certainly been a key element in keeping me sane during these distressing times. Great Willow’s James Combs and Ed Barguiarena join them on this track. Then Double Naught Spy Car joins them for the album’s closing track, “How You Gonna Know?” This song’s odd and unusual opening draws me in. It has a groovy and cool beat, plus some interesting vocal work. I love how this band, after all these years, is still taking chances, and creating interesting material. And I’m looking forward to seeing them perform these songs in concert.

Posted by Michael Doherty at 3:18 PM