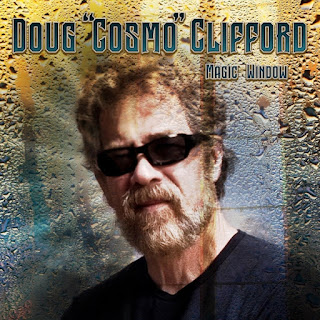 After Creedence Clearwater Revival broke up in the early 1970s, drummer Doug “Cosmo” Clifford released a self-titled solo album, featuring music that was somewhat in the same vein as what CCR was doing. He then, along with CCR bassist Stu Cook, joined the Don Harrison Band, and seemed to abandon any sort of solo career. However, now a previously unreleased solo album is making its way into the world, and for many of us, it is our first opportunity to hear him sing. And it turns out he has a pretty damn good voice. These tracks were recorded in 1985, the same year fellow CCR member John Fogerty released Centerfield, to put things into some sort of perspective. This album has quite a different sound and vibe from that album. It features all original material, written or co-written by Doug “Cosmo” Clifford. Joining the vocalist/drummer on these tracks are Russell DaShiell on guitar, synthesizer and backing vocals; Chris Solberg on bass and keys; and – on a couple of tracks – Rob Polomsky on rhythm guitar.

The album opens with its title track, “Magic Window,” which has a strong mid-1980s rock vibe, and is about looking at the world from inside, told from the perspective of someone who seems reclusive and perhaps lonely, though hopeful, the window acting almost like a movie screen, and he being eager to see what scene it will present to him next. “Window, open up your magic/Show me who I’m gonna love/Is it someone coming from a distance/Like a shadow in the moonlight up above.” Watching the world from inside is certainly a subject that people can relate to during this pandemic. “Magic Window” was written by Doug Clifford and Rob Polomsky. Polomsky also plays rhythm on guitar on this one, and on the track that follows it, “Born On The South Side.” This song has a bit more of the sound we might expect from a member of CCR, a bit more of a country element. It’s about the effect of music on someone’s early development, leading to pursuing music as a passion and career, and being out on the road. “I loved the blues, and rock was cool/And country was so fine/I missed a lot of school/I played my records all the time.” This is a totally enjoyable song, one of my favorites. As it continues, it moves from the past to the present, with the line “I’m out on the road” repeated at the end. And as the track fades out, you hear him say, “That sounds pretty good to me.” To us, too.

“Don’t Leave Me Alone Tonight” is a love song, one of several on this album. When it gets going, it has a sweet sound, particularly on the chorus, and features a nice vocal performance. “The kind of moment that you dream about/You want to hold on forever/I fell in love, or is that obvious/I guess you don’t have to be too clever.” This one quickly grew on me. That’s followed by “Somebody Love Me Tonight” and then “Hungry For Your Love,” two tracks with a distinct 1980s sound, and for me the only two weak tracks on the album. “Somebody love me tonight/I don’t need perfection/Just treat me right with a little affection.” Those are followed by one of my favorite tracks, “Just Another Girl,” a love song with a positive, sweet and fun groove, as well as a strong vocal performance. “Suddenly you stood there/With your bright eyes right on me/Then I was your captive/And I’ll be eternally.” I wonder if this would have been a hit had this album been released back in 1985. Seems like it, but the song’s appeal is strong now too. This one was written by Doug Clifford and Rob Polomsky. Then “Love Mode” has more of a rock sound with a steady driving beat.

Love certainly plays a strong part on this album, and is the subject of many of its tracks, including “Fallin’ For You,” a fun, light pop number that is kind of catchy. There is a cheerful vibe about it. “I’m not sure I understand/But I know I want to be your man/It’s nothing that I ever planned/I’m fallin' for you.” We can certainly use more love songs these days (though I suspect that could be said of all times). “Fallin’ For You” was written by Doug Clifford and Chris Solberg. That’s followed by “Don’t Let Go,” another positive number, this one written by Doug Clifford and Russell DaShiell. This song is about holding onto one’s dreams. Check out these lines: “Now the music has changed, are we still the same?/Well, it’s hard to say/Though the years have gone by, the feelings inside haven’t gone away.” Those are lyrics I think most of us can relate to as we’re getting older, no matter what are passions are. I think it would be damn near impossible to dislike this track; the energy, the message, the beat all work to raise our spirits. The album then concludes with another song of love, “You Mean So Much To Me,” written by Doug Clifford and Chris Solberg. “Every day I spend with you is better than the one before.” When I say things like that to my girlfriend, she tells me not to be goofy. I think I’ll just play this song for her, let Doug Clifford say what I mean, though the song is a reminder to tell those we love how we feel.

CD Track List
Magic Window is scheduled to be released on April 24, 2020.
Posted by Michael Doherty at 6:09 PM