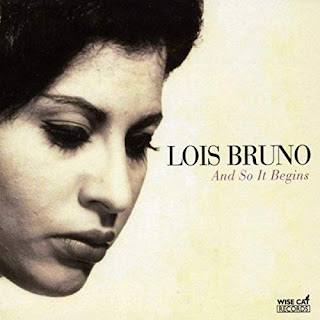 Lois Bruno has sung with many artists over the years, and has now released her first solo album, titled And So It Begins, featuring mostly standards. Backing the vocalist on this album are Kenny Shanker on saxophone (Shanker also produced the album), Michael Eckroth on piano, Yoshi Waki on bass, and Brian Fishler on drums.

The CD opens with “When Sunny Gets Blue,” featuring a vocal performance that is gentle and intimate, and also rather sexy at moments. I also love the bass line. The saxophone acts as a second voice, first adding little comments, backing Lois, and then taking the lead, becoming beautiful. “When Sunny Gets Blue” was written by Marvin Fisher and Jack Segal. It’s followed by an unusual take on Cole Porter’s “Love For Sale,” which has a fuller, brighter sound almost from the moment it starts. Lois Bruno decides to begin it with the chorus. There is a great energy behind this version, and it feels like it could carry us all off to some glorious land. Yoshi Waki and Brian Fishler really keep things moving, and I like Michael Eckroth’s work on piano. But it is that lead on saxophone that really stands out on this track. Kenny Shanker’s saxophone seems to be dancing at times, and there is a lot of joy behind his playing.

Lois Bruno begins “Bewitched, Bothered And Bewildered” a cappella, which works really well. I love the way she delivers this one, at a few moments so softly you might find yourself leaning toward your stereo speakers, wanting to be closer to her. Her voice is the focus here, though this track also features an excellent lead on saxophone. This is one of my personal favorite tracks. It’s followed by “That Old Black Magic,” which features some delightful work on bass. It is the bass that starts this one, and at first it is the only instrument backing Lois Bruno’s vocals, which is cool. This rendition really moves, in part because of Brian Fishler’s wonderful work on drums. There is a delicious momentum to it, like that old black magic itself is at the reins here, and we will all get caught up in it before long. As Lois sings “I should stay away, but what would I do,” you get the sense there is absolutely no way she could stay away. She is powerless here, just like the rest of us.

Lois Bruno’s rendition of “Always On My Mind” is so beautiful, so touching, so sweet, so honest. This track is another of the disc’s highlights, and it is nearly heartbreaking when she sings lines like “And maybe I didn’t hold you/All those lonely, lonely times/I guess I never told you/I’m so happy that you’re mine/Little things I should have said and done/I just never took the time.” This song acts as a reminder to tell the love of your life how important he or she is to you, and to tell him her or her often, hold that person as much as you can. The saxophone has a gorgeous bittersweet sound. That’s followed by a version of “But Beautiful” that has a rather cheerful vibe, in large part because of the work on bass, which has a sort of bouncy feel. Then with “Feeling Good” Lois Bruno is at her most seductive, particularly when she hits those lower notes. So damn delicious. This is a seriously cool version, featuring some great work on piano and another excellent lead on sax. I’m a little sad when this one starts to fade out, for the ending comes too soon. It feels like it is still going strong and has more to say.

A good, cheerful beat is established at the beginning of Lois Bruno’s take on “My Romance,” and there is certainly a lot of joy in this rendition, both vocally and in the music. “Wide awake, I can make my most fantastic dreams come true/My romance doesn’t need a thing but you.” Lois follows that with “Over The Rainbow.” She includes that opening section that was not in the version Judy Garland sings in the film. What is it about this song that always makes it so effective? Every time I hear it, it works its magic on me. “Over The Rainbow” is followed by “Cry Me A River.” My introduction to this song was the Joe Cocker version from Mad Dogs And Englishmen, which of course is quite a bit different from other renditions. I have come to love the slower, jazzy renditions, of course, and Lois Bruno’s take is certainly in that realm. This rendition begins on bass. Lois Bruno’s voice has a sexy, sultry quality that is wonderful. Lois Bruno then concludes the album with “Somewhere,” a song from West Side Story. I’m not a big fan of that musical, but some of the music is really good, and Lois delivers a passionate rendition.

CD Track List
And So It Begins was released on October 24, 2019 on Wise Cat Records.
Posted by Michael Doherty at 3:22 PM