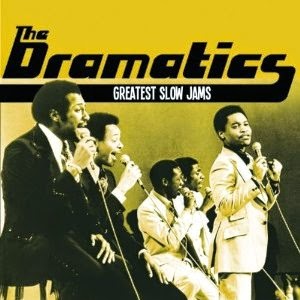 The new compilation from The Dramatics, Greatest Slow Jams, is an interesting collection of mellow tracks. Obviously it’s not a greatest hits album, for it doesn’t include the band’s biggest hit, “Whatcha See Is Whatcha Get.” But there are some great tunes included here. And as the title promises, these are slow jams, mellow make-out tunes. This is a great album to listen to while curled up with your lover. All but one of these tracks were originally released between 1972 and 1977 (with the majority from 1972 and 1973). The one exception is “Tomorrow,” which was released in 1985, and not on available CD until now.

The Dramatics feature several distinct voices, with each taking the lead at different times. I love the way their several voices interact, particularly on a song like “Toast To The Fool.”

“Just Shopping (Not Buying Anything)”

This collection eases us in with “Just Shopping (Not Buying Anything),” a tune that feels like morning at its start. It feels to me like waking up with a lover when you’re too relaxed to say anything other than “Ooh, baby,” a line that opens the song, a line that is repeated many times before the actual lyrics start. And then later we’re treated to lines like, “You’re looking so good to me, all I can do is tremble.” This song was written by Michael Henderson, and was originally included on Drama V (1975).

“In The Rain” opens with rain sound effects. I’ve said it before, but I’ll say it again: I hate rain sound effects. Fortunately they stop before the song really begins (though they then return halfway through the song). Other than that, it’s a really good tune from Whatcha See Is Whatcha Get (1972), with smooth vocals. Here is a taste of the lyrics: “I want to go outside in the rain/Because I think I’m gonna cry/And I don’t want you to see my cry.” This song reached #1 on the R&B chart, and #5 on the pop chart. It was written by Tony Hester.

“I Can’t Get Over You” begins with a spoken word section, one side of a telephone conversation, in which he tells the woman, “You see, I know you’ve been going through some changes/But I’ve been going through some changes myself.” It’s told from the perspective of a man who has tried to get a woman out of his mind, out of his heart, but failed. “I can’t get over you/I’ve tried and I’ve tried.” This one features an impassioned lead vocal performance. This song was originally included on Joy Ride.

“I Dedicate My Life To You”

“I Dedicate My Life To You” is one of my favorites. It’s an unabashed love song that is sweet and sexy. Sure, some of the lyrics might seem a bit cheesy, like “You’re more precious than the breath of spring/And you’re my hopes and all of my dreams/For you I laugh and for you I cry.” But that is quite all right, because they’re still effective. And the song has a nice, slow groove. It was written by Robert Holmes and Roger Hatcher, and was originally included on Dramatically Yours.

In "And I Panicked," he’s in trouble. He calls a woman three times in the morning, and when she doesn’t answer, he goes to her place. Romantic, or just sad? It’s up to you. But the way these guys sing it, you’ll probably think of this song as romantic. I love the anguish and passion in his voice when he admits, “And I cried and I…” He can’t finish the line and simply cries out, nearly howling in pain. It's a great touch.

This compilation marks the CD debut of “Tomorrow,” a track released by L.J. Reynolds on vinyl in 1985. The music certainly has 1980s cheesy pop touches, but the vocal performance is excellent and heartfelt. “You'd better give your love today/For tomorrow very well might be too late." And then at the end he sings, "Your tomorrow could very well begin today.”

This collection concludes with "Hey You, Get Off My Mountain," a song originally included on A Dramatic Experience (1973). The song’s second line is “Hey you, get off my cloud” (which must be a nod to the Rolling Stones song).

Greatest Slow Jams is scheduled to be released April 29, 2014 through Stax and Concord Music Group.
Posted by Michael Doherty at 3:19 PM