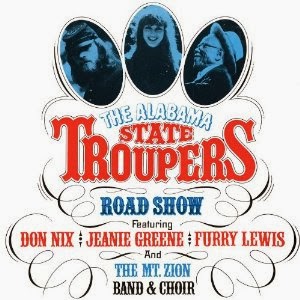 The only live album by The Alabama State Troupers, Road Show, has now been officially released on CD. Originally released on Elektra in 1972, this two-disc album was recorded in October of 1971 at the Long Beach Civic Auditorium and the Pasadena Civic Auditorium. These two discs feature some really good blues and country rock, with great gospel elements.

The album starts with some great acoustic blues by Furry Lewis, who was 78 years old at the time of the recording. The first track includes his introduction – “He’s the greatest blues man, I think, to us, that ever lived.” And then Furry speaks a bit himself (“It’s a great pleasure to be at your beautiful city”) before launching into his first tune. His segue into the first tune, “Furry’s Blues,” is great. He begins playing guitar, but keeps talking for a moment (“I got a letter yesterday here in California say I lose my wife”). It’s a joke, and I wondered if it was part of the song, or just a thought he had at the time. I love that seamless transition from introduction to music, making it all part of the same thing.

His performance has a mesmerizing quality to it. There are some interesting pauses where I found myself holding my breath. And then there is a great intensity in the section where he lists the women for each day of the week. He owns that audience. You can hear it in this recording.

He tells the audience, “I’m going to take you all to Brownsville,” saying his girlfriend quit him and moved, and he jokes that there are signs saying Furry’s not allowed there. And then he goes into “Brownsville,” one of my favorite tracks. I love the guitar part. And it has this line: “She put strychnine in my tea.”

I also dig his “I’m Black” and the delightful “A Chicken Ain’t Nothing But A Bird.” Furry Lewis has a great way of using the guitar as a percussion instrument, adding funny little accents with a tap or smack here and there. I’ve heard several people do that over the years, of course, but Furry has a way of doing it that makes it feel original.

The full band then gives a great, rousing rendition of “Will The Circle Be Unbroken,” complete with some excellent gospel backing vocals. I’m also fond of Clayton Ivey’s work on piano on this track. This song leads right into “Amos Burke,” keeping the energy level high. Things turn more glorious with “Mighty Time.” This is really just a whole hell of a lot of fun. That tune is followed by a powerful, slow version of “Jesus On The Mainline,” featuring the Mt. Zion Choir.

The second disc opens with some stage banter, including reactions to shouts from audience members. The band then does a pretty, mostly acoustic tune titled “Opening,” which is driven by the vocals. “I need time to find out where I’m going/I need people to show me where I’ve been.”

Jeanie Greene gets a chance to stretch her vocal chops on “Joa-Bim,” accompanied by piano, and then on “Dixie,” backed by some beautiful backing vocals. “Dixie” is a strong track, one of my favorites on the second disc.

They pick things up significantly with “Heavy Makes You Happy,” a fast-paced rock and boogie tune. Things get even wilder with “Iuka.” It takes a little time to get going, but when it kicks in, watch out. Put away anything breakable, and cut loose.

“Asphalt Outlaw Here” includes a cool drum solo, with some excellent touches on piano. And this two-disc set ends with a couple of really good tunes – “My Father’s House” (I particularly like the vocals on this one) and “Going Down,” a driving rock tune featuring some nice work on lead guitar. It does have an odd section where the song stops momentarily and Furry is mentioned (“he ain’t ever goin’ down”), and the line “A chicken ain’t nothin’ but a bird” is said again.

Road Show was released on November 25, 2013 through Real Gone Music.
Posted by Michael Doherty at 11:14 AM