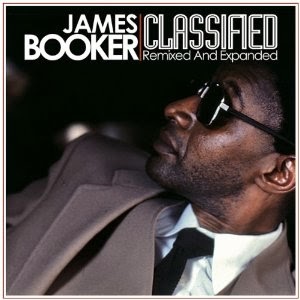 I’m not sure how I got this far into my life without owning James Booker’s 1983 record Classified. Well, no matter, as now it’s been re-released with all sorts of bonus tracks. A lot of incredible pianists have come out of New Orleans. It seems they specially breed them down there. James Booker is certainly among that group. There are times when listening to this CD that I just find myself with my mouth wide open in surprised joy at his playing.

A wide range of musical genres and interests are contained in these tracks – jazz, blues, R&B, rock and roll (“Hound Dog”), even country (“King Of The Road”). The range is surprising, but not jarring. I find this album completely engrossing and delightful. There is something loose, yet professional about these recordings.

James Booker is the kind of musician who impresses even other great musicians. I was talking about him with a friend who is also an excellent New Orleans pianist, and he said there’s a tune by Booker where he swears Booker must have five hands to play it. He’s that kind of musician.

Classified: Remixed And Expanded contains new mixes by David Farrell. I don’t have the original album, so I can’t make comparisons. Nine of the tracks were previously unreleased. This album had me smiling throughout. Check out the joyous rendition of “Baby Face” for example. I particularly like the instrumental section in the second half of the song. I love his cover of Fats Domino’s “One For The Highway.”

The album’s title track is also the opening track, an original tune that begins with a piano solo. There is a good groove. At first you expect a full band to jump in, and after a while you hope no one else comes in. No one else is needed. His energy and playing constitute an entire band. Nearly two minutes into the song, the vocals begin. “Some say I’m crazy.”

The band joins him for a moving rendition of “If You’re Lonely.” James Booker’s vocals are excellent on this track, and the accompaniment by Alvin “Red” Tyler on tenor saxophone is perfect.

A solo take is also included on this CD, and it’s likewise excellent. Listen to him on lines like “Let’s forgive and forget.” Wow.

The CD contains two versions of “Lawdy Miss Clawdy.” The first is an excellent solo performance by James Booker on piano and vocals. This is one of the bonus tracks, and one of the best tracks. It’s great fun, though I wish it were longer. The full-band version is also very cool.

James Booker performs a beautiful rendition of “Angel Eyes,” a song written by Matt Dennis and Earl K. Brent. His piano work on this track completely blew me away. I just didn’t want it to end. It is intricate, wild, yet it retains its beauty throughout. There is something sexy about this recording, and it’s one of the highlights of the CD.

Another highlight is “Lonely Avenue,” which is also one of the previously unreleased tracks. It features a great, familiar groove, and some nice work on saxophone. As good as Booker’s piano-playing is on this track, he really allows Alvin “Red” Tyler to take the lead, to take the song to certain heights. This track will get you swaying, get you smiling. Sure, the ending is a bit messy, but who cares?

“King Of The Road”

I’ve always loved Roger Miller’s “King Of The Road.” I’ve heard many versions of this tune over the years, and they never fail to bring me joy. Booker clearly has a lot of fun with this. And you will too while listening to it. I particularly love his delivery on “Could you pay my union dues?”

James Booker plays Hammond B3 on “Yes Sir, That’s My Baby,” and it’s totally fun, the sound of the organ making me feel like I should be at a baseball game (Go Red Sox!). There is also something of a New Orleans carnival feel to this recording. What joy! The vocals come in around the three-minute mark. This is one of the previously unreleased tracks.

Some of the bonus tracks are among the best in this collection. I already mentioned tracks like “Lonely Avenue” and “Yes Sir, That’s My Baby.” But several others deserve mention. “Warsaw Concerto” is a gorgeous classical instrumental piece composed by Richard Stewart Addinsell, and it’s played beautifully by Booker. A wonderful surprise is his jazzy take on the “Theme From The Godfather.”

“I’m Not Sayin’” is an original composition, a great bluesy jazz piece. Of course his piano work is excellent, but I also really dig that slow bass line by James Singleton. This is yet another of this CD’s many highlights.

The album concludes with a version of “Amen,” which was not on the original release of this record, but which was included on a sampler in 1988.

James Booker died in November of 1983, just six months after the original release of this album.

Classified: Remixed And Expanded was released on October 15, 2013 through Rounder Records.
Posted by Michael Doherty at 12:34 PM