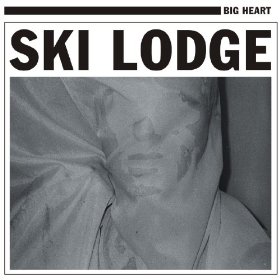 Big Heart, the debut full-length CD from Ski Lodge has more than a bit of a 1980s flavor to its sound. Think Modern English or The Smiths. This is a very strong album, with not a single weak track. There are lots of good vibes, positive sounds, catchy rhythms, and beautiful vocals. And actually this CD features a great mix of dark and light tones. All songs are originals, written by Andrew Marr. An impressive debut album is made even more impressive by the fact that Marr plays nearly all the instruments on this release.

These songs are also interesting lyrically. In “Does It Bring You Down,” for example, Andrew Marr sings, “You think that you’re so hard/You act like you’ve got something to prove/Emotionally scarred/Nobody’s got it as bad as you/And now you’re saying you don’t want to be this way.” We all know someone like this, eh? In that song, he also sings, “You say that you’ve got faith/You look like you could use some more/Or maybe just a taste of everything you lost the night before.”

“Anything To Hurt You”

Big Heart opens with “Anything To Hurt You,” which boasts a great pop rhythm, with beautiful, moody vocals. And yes, it has a definite 1980s vibe, particularly in the instrumental sections. But the song is certainly no rehash of other, older material. It is vibrant and original. At the end, Andrew Marr sings, “I never wanted anything to hurt you/And it feels so good to know there’s nothing I can, nothing I can do.”

“Boy” is one of my favorites. Every time I listen to this song, it immediately makes me smile with that great, bright pop guitar intro. I’m so glad people are still writing songs like this. I’d love if this became a dominant strain in pop music again. Hell, if that happened, I could go back to listening to pop radio stations (something I haven’t been able to do since the mid-1980s). “Son, you’ve got much to learn/You’ve got much to learn/So read a book or maybe two.” This song was released as a single, as well as a music video.  Luke Top plays bass on this track.

At the beginning of “Big Heart,” the album’s title track, the guitar feels like a slowed down version of a 1960s riff. The vocals have a near-ethereal quality on this track. It’s a strange, slower tune, with a vulnerability. “Big heart, when will you fail me?”

“You Can’t Just Stop Being Cruel”

“You Can’t Just Stop Being Cruel” has an interesting combination of a moody atmosphere with a pop beat to get you dancing. I found myself moving to this song, only to then stop and be moved by it on a more emotional level. And then I’d be dancing again. “Tell me how you’ve come, how you’ve come so very far/And if you only saw what a train wreck you really are.”

“Dragging Me To Hell”

“Dragging Me To Hell” opens with the lines, “Don’t say that I haven’t been there for you in any ways/I cut myself just to make you happy/And you’ve been so condescending to me.” This is one of my favorites, and this is one that might get you dancing. I dig how the vocals at moments are really at the fore, over a good, simple, fun beat.

“Just To Be Like You” is another beautiful pop gem with a good beat and wonderful vocals. It has a bright feel, even as Andrew Marr sings lines like, “Oh, just to be like you/Is all I ever wanted to be/Scared and uncommitted to the truth/That’s what I thought I should be.” This track was recorded with the full band, the only such track on this CD.  Tim McCoy is on drums; John Barinaga is on guitar; Jared O’Connell is on bass; and Kevin McMahon is on keys. There is a cool change in the second half of the song, with a catchy riff. (This was the first track to be released from this album.)

“I Can’t Tell,” the album’s final track, begins with ethereal vocals, leading to the lead vocals, which also have an otherworldly quality about them, playing over piano. This song has quite a different feel from the other tracks. There really is something angelic about it. “Am I holding on for no reason, for no reason?” This is such an interesting track to leave us with, with its very sparse percussion and its last line of “I’ve given you everything.” The song then slowly fades out.

Big Heart was released on August 20, 2013 on Dovecote Records.

Note: I also posted this review on Pop Culture Beast.
Posted by Michael Doherty at 1:32 PM