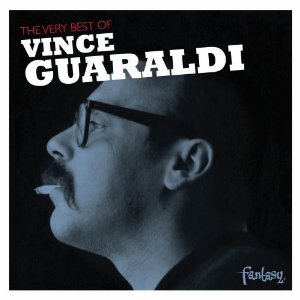 Pianist Vince Guaraldi recorded a lot of excellent music during his lifetime, but I think I'll always associate him with the composition I first heard as a child, the theme from Peanuts, "Linus And Lucy." That theme, along with several written for A Charlie Brown Christmas, are included on the new compilation, The Very Best Of Vince Guaraldi.  This collection contains mostly original compositions, but also some good covers, like "Softly, As In A Morning Sunrise," which is a fun tune featuring some nice work by Eddie Duran on guitar (Although, is the word "morning" really necessary in that title?). That song was written by Sigmond Romberg and Oscar Hammerstein II for The New Moon.

Whether performing one of his own compositions, or giving his spin to someone else's song, there is something so truly happy in Vince Guaraldi's playing that absolutely transfers to the listener.  If a musician's style of playing is any indication of personality, then Vince Guaraldi must have been extremely kind and generous of spirit. And also a lot of fun, for there certainly is a playful quality too.

"Cast Your Fate To The Wind"

The Very Best Of Vince Guaraldi opens with "Cast Your Fate to The Wind." The first section of this song is so pretty and joyful. I'd be surprised if it didn't make you feel good. And then some wonderful drumming by Colin Bailey announces the change to a groovier jazz section, which is equally wonderful. This song was actually a hit on the pop charts.

"Cast Your Fate To The Wind" was originally released on Jazz Impressions Of Black Orpheus, which was re-issued in 2010. ("Mahnã De Carnaval," from that record, is also included in this collection.)

"El Matador" likewise has some interesting changes. What's impressive is how the changes can be both abrupt and smooth. This is a live track, originally released on Live At El Matador. El Matador was a club in San Francisco where Vince Guaraldi frequently performed.  Vince Guaraldi's playing is particularly wonderful on this track.

"Treat Street" is a fun, catchy pop-jazz tune with a Latin feel. It was named after the street in San Francisco where Fantasy Records was located. This is a seriously happy tune, and according to the liner notes, it was intended to be a follow-up hit to "Cast Your Fate To The Wind." And although it's a great tune, it was never a hit.

"Linus And Lucy" is probably the tune that Vince Guaraldi will always be remembered for, and that's not a bad thing. I love this song. According to the liner notes, it was originally written for a television documentary on Charles M. Schulz. It was then, of course, included on A Charlie Brown Christmas, which is the best Christmas special ever made. And the music is a big reason for that special's appeal. This is a song everyone can dance to. Just pick your favorite Peanuts character dance, and imitate it. (I like the one with arms straight out.)

(It must have been interesting to see him perform this one live before the Christmas special came out - to hear it without the associations, to hear it simply as a great piece of music.)

"The Lady's In Love With You"

This collection concludes with three more Peanuts tunes. The first, "Charlie Brown Theme," was also written for that half-hour special, and has a great groove. The other two were written for the Christmas special. "Christmastime Is Here" is that beautiful, sweet (even sad) tune that you all know and love. I always enjoy that great constant work with brushes on the snare and hi-hat (That's Jerry Granelli on drums). Plus, there's a nice bass lead by Fred Marshall a few minutes in.

Vince Guaraldi died from a heart attack in 1976.
Posted by Michael Doherty at 2:08 PM