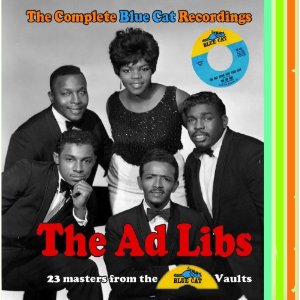 The Ad Libs, for those who might be unfamiliar with the name, was a 1960s doo-wop group from New Jersey.  I love listening to these early vocal groups.  There is a joy and an innocence to the music. It's like an alternate reality that you sometimes want to be a part of, and almost can be simply by listening and immersing yourself in these great tunes.

There are twenty-three tracks listed on the back of the case, more than half of which were previously unreleased.  But when I put the disc in, I was surprised to see there are thirty tracks, totaling nearly eighty minutes.  Holy moly!

It's pretty amazing that these tracks are available.  A good chunk of them are a cappella demos, and these are the best tracks of this collection.  It's especially in these renditions that you can hear just what a damn good group of singers these guys were.  And of course, that's how a lot of these groups began, performing unaccompanied on street corners and wherever else they could.  So you're hearing the real thing here.  These songs were all recorded in 1964 and 1965.

"The Boy From New York City"

The Complete Blue Cat Recordings opens with The Ad Libs' giant hit, "The Boy From New York City." It reached #8 on the Billboard Hot 100.  You all know this one.  This is a song that often creeps into my noggin.  The line that always sticks out for me is "And he's cute in his mohair suit."  Is this an early fetish song?  Okay, I want a mohair suit.

This collection features three more versions of "The Boy From New York City."  The first is an a cappella demo version that is completely delightful.  This song really doesn't need any instruments, just this great group of singers (with some finger snaps, of course).  I think this version might be superior to the one everyone's heard.

The second bonus version is a slightly longer, alternate version, which features some interesting stuff on horn, particularly on the lines "And he's neat, and oh so sweet" and "And he's cute in his mohair suit" (there is no horn on those lines in the original). The final version is the backing track without the lead vocals.

"Kicked Around" is a very strange song. It feels almost like it's not quite finished, like the instruments present were selected at random with the intention that they'd be replaced later.  That is not to say it's a bad tune.  I actually really like it, partly because there is nothing else that sounds quite like it.  This song was the flip side to "The Boy From New York City."

There are two more versions of "Kicked Around" on this disc.  The first is an a cappella demo version, which is insanely fun.  I definitely prefer it to the official version.  It's one of the collection's best tracks.  The second is a slightly longer, alternate version, which features some goofy and fun backing vocals.

"Ask Anybody" is a fun, silly tune with a great groove.  This one really features female vocalist Mary Ann Thomas. She lets loose on this one at times.  There are some strange little (and very cool) touches on saxophone, like little thoughts, breaths, interjections.  "Ask Anybody" was written by Rudy Clark, and is one of my favorites.

There is a second version presented in this collection.  This alternate version has a great energy, and feels just a bit more raw, particularly in Mary Ann's lead vocal line.

I knew I was going to love this song.  After all, how could a mid-1960s song titled "The Slime" be anything less than wonderful?  And yeah, my favorite section is when the male vocalists sing, "The slime" while Mary Ann Thomas sings, "Get down in the gutter/And melt like butter."

"The Slime" isn't about some jerk who did her wrong.  It's the name of a dance.  And if anyone can show me how to do it, please contact me.  I'm serious.  It was written by Jerry Leiber and Mike Stoller, the folks responsible for some of Elvis Presley's most famous songs, as well as some great stuff The Coasters did.

(I'm trying to find out for sure, but it seems that the Coasters recorded a version of "The Slime" that was titled "The Climb."  I've read conflicting information, but it seems "The Climb" was the original version, and later it was switched to "The Slime."  And one site says it was later titled "Daddy Wah Dah Do" and recorded by Peggy Lee.  Who knows?)

"The Tide Has Turned"

"The Tide Has Turned" is a wonderful tune with male lead vocals.  This is an a cappella demo recorded in October of 1964.  Here is a taste of the lyrics: "I told you a long, long time ago/How much I really love you so/Now the tide has turned/Say I pleaded with you patiently/To always stay real close to me/Yeah, but now the tide has turned."

"Santa's On His Way"

I'm always on the lookout for good Christmas tunes, because most Christmas songs flat-out suck.  While The Ad Libs' tune, "Santa's On His Way," isn't fantastic, it definitely has charm.  A good deal of its appeal is in its a cappella delivery.  And I can't help but like the lines, "Don't you know little things you say and do/Will make ol' Santa Claus think an awful lot of you." And the second time she sings it, she changes the second line to "Will make ol' Santa Claus bring a lot of things to you."  Hey, I want a lot of things!  I'm certainly adding "Santa's On His Way" to my holiday play list.

Tracks 24 through 30, though not listed on the CD case, are bits of The Ad Libs in the studio.  All contain studio chatter.  They break down as follows:

Track 24 is the band working on "The Slime."  Some of the studio chatter is interesting, like when they're told how to position themselves around the microphone.

Track 25 is the band working on "He Ain't No Angel."  You can hear someone ask, "Is the group singing too loud?"

Track 26 is the band working on "Ask Anybody."  There is a bit of horn, and they work on the tempo.

Track 28 is the band working on "Kicked Around."  This track has probably the most interesting studio chatter in terms of putting a song together.  Plus, it has this: "I'm sorry - I forgot your name."

Track 30 is the band working on "The Boy From New York City."  After a bit of it, someone says, "Everybody's soul wasn't in it."

The Ad Libs, at the time of these recordings, were Hughie Harris, Danny Austin, Dave Watt, Norman Donegan and Mary Ann Thomas.

The Complete Blue Cat Recordings is scheduled to be released on May 1, 2012 through Sun Entertainment and Real Gone Music.
Posted by Michael Doherty at 2:31 PM