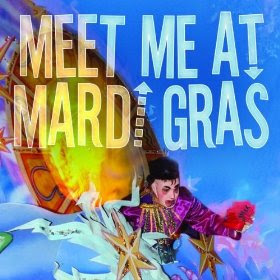 Now that Christmas is safely in the past and good Christian folks have tossed their trees to the curb, we can get ready for the real holidays - Mardi Gras and St. Patrick's Day. These are also the two holidays with the best music. No question about it. First up is Mardi Gras, which falls on February 21st this year.

If you've never been to New Orleans for Mardi Gras, I highly recommend you make the trip. Until then, you can use this compilation, Meet Me At Mardi Gras, to create the carnival atmosphere in your own home. It will definitely put you in the right mood, in the right frame of mind. And if you play it loud enough, don't be surprised if your neighbors gather beneath your window, demanding you flash your tits or toss them some beads. And you'll be happy to comply.

Meet Me At Mardi Gras features a good range of artists such as New Orleans Nightcrawlers, Larry Williams, Al Johnson and Marcia Ball.

This compilation begins with "Say Na Ney" by The Soul Rebels. This is a song that describes New Orleans during the celebration, with lines like "People walking around/Party all over town." It has a good groove, but it does feel just a bit too slow after a while. But then there is a cool horn section which saves the song right at the moment when it otherwise might start to wear on you.

"Goin' Back To New Orleans"

The album really picks up with its second track, "Goin' Back To New Orleans" by Joe Liggins & The Honeydrippers. This is a great old tune that is so cool that you actually become a hipper person just by listening to it. Seriously. Try it. There is something sly and sexy in the horn solo, and the piano lead is wonderful too. If some of those nasty New Orleans vampires were draining me of blood, I'd be okay with it, as long as this song was playing. That's how cool this song is.

For more recent New Orleans music, this compilation presents "Funky Liza" by New Orleans Nightcrawlers, a band that formed in 1994. This is one of those songs that creates the atmosphere of a party by having a lot of background noise - folks shouting and talking and sometimes singing along. Sometimes that sort of thing can be annoying, but this band makes it work. This song is nice extended jam, and you'll catch little teases of other Mardi Gras tunes. "Funky Liza" was originally included on their 1997 release, Funknicity.

A Mardi Gras compilation has to include a version of "Iko Iko," and this one presents a 1950s rock version by Larry Williams. This song is always fun, but this particular version surprised me. I'd never heard it done quite this way before, being more familiar with the Dr. John and Grateful Dead versions. The only problem with this version is it's over so quickly. It's only a minute and a half long. What a tease. Program your CD player to repeat it a few times. (Remember when you first heard this song, and you tried to decipher the lyrics - a friend of mine thought it was "chuck morphine all the day.")

Al Johnson's "Carnival Time" is one of the most famous songs associated with the holiday, and it's the song Johnson is most well known for. This tune was recorded in 1960, and it totally holds up. It has that great New Orleans energy and vibe. Here is a bit of the lyrics: "Well if you put in a nickel, well now I'll put a dime/We can get together now and drink up some wine/All because it's carnival time." I don't think those prices are still valid. If you head to New Orleans, be sure to take more than fifteen cents. But however much money you have, you'll be sure to hear this song. After all, "It's carnival time and everybody's having fun."

"Go To The Mardi Gras"

Another seriously fun song is Professor Longhair's "Go To The Mardi Gras." It features some whistling to get you going before the vocals even start, setting the tone. This song's beat will have you shuffling through the streets with a big smile on your face. (This song is also called "Mardi Gras In New Orleans.")

The fun vibes continue with ReBirth Brass Band performing "Do Whatcha Wanna, Part 3." That's sort of the message or philosophy behind the celebration of Mardi Gras - Do what you want to do. It's all good. People get really loose during this holiday, and this is a loose party song to go along with it. Grab a drink and a few inebriated dance partners and enjoy. And, as they shout right at the end of the song, "Shake that ass."

"Meet Me With Your Black Drawers On"

This compilation concludes with Chuck Carbo's "Meet Me With Your Black Drawers On," from his 1993 release, Drawers Trouble. This is by far the bluesiest (is that even a word?) song on Meet Me At Mardi Gras. But that doesn't mean it's a downer. Far from it. This song has a good groove, and some nice work on horns.


Meet Me At Mardi Gras was released on January 10, 2012 through Rounder Records.
Posted by Michael Doherty at 3:13 PM