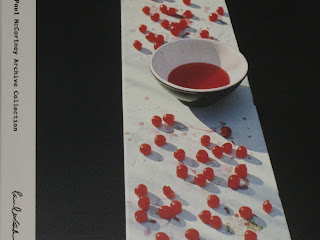 In 1970 when the Beatles were breaking up and Let It Be was about to be released, Paul McCartney released his first solo album, titled simply McCartney. And this is really a solo album. He plays all the instruments and does the vocals. Linda provides harmonies. And that's it.

McCartney has always been one of my favorite Paul McCartney albums - maybe my favorite, though there are times when I can't get enough of Band On The Run. Sure, the first song is a throwaway tune - a little love song to his wife - but it's sweet and it's over in less than a minute. And almost everything that follows is excellent.

This special edition of the album contains a second disc of bonus material, including two versions of "Maybe I'm Amazed." This is the second release in the the Paul McCartney Archive Collection (the first being last year's issue of Band On The Run).

"That Would Be Something"

The Grateful Dead covered this one a few times toward the end of their career. (I was lucky enough to be present at the concert when they first played it; that show was later released as Dick's Picks Volume Seventeen.)

"Every Night" would have fit in with the Beatles later material. You could easily imagine this on the White Album or Abbey Road. It's a sweet love song with lines like, "Every morning brings a new day/And every night that day is through/But tonight I just want to stay in/And be with you... and be with you." A live version of this song from 1979 is included on the second disc.

"Junk" is another tune that sounds like it would fit perfectly on the White Album. And in fact it was recorded in 1968 for inclusion on that album. It didn't make the cut (though that album is a double LP). However, later that version was included on Anthology 3. This song is really pretty. Here is a bit of the lyrics: "'Buy, buy,' says the sign in the shop window/Why, why? says the junk in the yard."

"Singalong Junk" is an instrumental version of "Junk." The "Singalong" in the title implies that the listener should sing to the track. Does that make this an early karaoke track?

"Momma Miss America" is one of my favorite tunes from this album. It's a fantastic instrumental with a catchy groove. I'm surprised that Quentin Tarantino hasn't used this one in a film yet. Seriously, I think he'd be beside himself with excitement listening to this track. I've actually spent hours listening to this one over and over, back when it was originally released on CD. Hours well spent, honestly.

I've always preferred this version of "Maybe I'm Amazed" to the full-band version released in 1976 on Wings Over America and in 1977 as a single. It's less polished. It has this great raw power and energy, particularly in his vocals. "Maybe I'm Amazed" is a fantastic song, one of the best Paul McCartney ever wrote. It starts, "Baby I'm amazed at the way you love me all the time/And maybe I'm afraid of the way I love you." Perfect. The most famous song from this release, "Maybe I'm Amazed" became a staple of McCartney's live performances. This original version fades out at the end.

Two other versions of "Maybe I'm Amazed" are included on the second disc. The first is from One Hand Clapping (a 1974 film directed by David Litchfield), with Paul on keyboard. The second is a concert performance from 1979. In the live version, Paul's voice sounds a bit strained and tired (almost like Rod Stewart at moments), but that element actually really works for this song.

The album concludes with "Kreen-Akrore." I always forget about this song. This meandering track (in which Paul seems to be learning how to play drums) never did anything for me, and is my least favorite from this album. It's an instrumental, sort of - there are vocals, but no lyrics.

(By the way, Kreen-Akrore was the name for an indigenous people in Amazon. They're now called the Panara.)

The second disc contains just over twenty-five minutes of music, and so it could have actually fit onto the first disc. But I'm glad they separated these bonus tracks from the originally released album.

The first song is a strange little number titled "Suicide." This song fades in, and features Paul on vocals and piano. It definitely has a strong sense of him goofing around, trying to feel his way through the song. It's a treat to listen to what seems essentially to be a rehearsal.

There are three songs from a concert in Glasgow from 1979: "Every Night," "Hot As Sun" and "Maybe I'm Amazed." "Hot As Sun" is a fun instrumental. On the original album it is paired with another instrumental track titled "Glasses." The live version features a horn section that is wonderful.

"Don't Cry Baby" is basically an instrumental version of "Oo You." At the beginning, Paul is telling a crying baby: "Don't cry, little baby/Don't cry/Daddy's going to play you a lullabye." He then counts off, and the song goes into the instrumental. And in some ways I actually prefer this instrumental version. It's seriously cool.

The final track is a demo of "Women Kind," which has Paul on vocals and piano. This song has almost a cabaret feel. The lyrics begin, "Women kind/They have a terrible time/From the age of ten/They're chased by men/Oh, what a crime." It even includes references to bra-burning. Paul does a silly voice partway through the tune, which is amusing. But this is certainly not among his best material. And he even makes fart noises at the end.


The booklet includes lots of great photos and the lyrics to the songs from the first disc, but for this Archive Collection release I was hoping for some extensive liner notes, and there are none. For example, I would have loved some information about the bonus tracks.

This special two-disc edition of McCartney was released on June 14, 2011. There is also a three-disc edition available, the third disc being a DVD which includes some concert footage and two songs from MTV Unplugged. That version also includes a 128-page book, which has the information I sought in the booklet for the two-disc version. The two-disc version is also available on vinyl.

Released on that same day is the Paul McCartney Archive Collection edition of McCartney II. Released last year in this series was Band On The Run. Future planned releases include Ram, Wings At The Speed Of Sound, Wings Over America, and Venus And Mars. I'm really looking forward to all of those. I'm one of those people who would like to own every song that every member of The Beatles ever recorded. And I know I'm not alone in this.
Posted by Michael Doherty at 4:52 PM