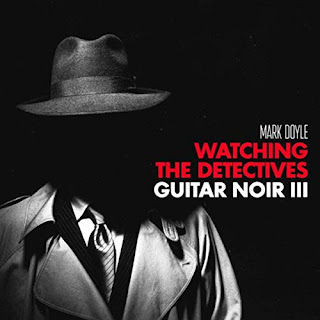 In 1999, guitarist Mark Doyle released Guitar Noir, his first solo album. Then in 2011, he revisited the idea with In Dreams: Guitar Noir II, with all of the tracks dealing with dreams (and nightmares). These albums featured some original material, along with covers. Now Mark Doyle is again returning to the series with Watching The Detectives: Guitar Noir III, an instrumental album featuring interesting renditions of popular themes from television, as well as some original compositions. There are also a couple of covers of songs that are outside the detective theme, including Frank Zappa’s “America Drinks And Goes Home.” In addition to guitar, Mark Doyle plays keyboards and bass on this album. Joining him is Josh Dekaney on drums and percussion. There is also a string section made up of Ally Brown, Shelby Dems, Jonathan Hwang, Joe Davoli, and Kate LaVerne.

The CD begins with a medley titled “Detectives Medley.” An unusual way to kick off an album, right? The first song of this medley is Elvis Costello’s “Watching The Detectives,” a song originally released in 1977. This version has a cool, somewhat eerie pulse. It isn’t long before Mark Doyle segues into a tune from the 1960s, that great theme from the television series Get Smart. This version feels a bit heavy, but works well. Mark then goes back just a few more years for another television theme, Nelson Riddle’s theme to The Untouchables. Those three tunes make up the medley, but of course Mark Doyle is not finished with television themes, following the medley with “Kojak Theme,” taking us back into the 1970s. This rendition certainly retains a strong 1970s vibe, in the rhythm and so on, while the guitar work seems appropriate to that decade but not restrained by it. Then Mark Doyle gives us the theme from The Man From U.N.C.L.E., a fun choice, and a television theme that I always thought was cool. I like the percussion on this one, and there is plenty of guitar.

One of my favorite tracks is “Lost Letter,” written by Andre Previn, who died earlier this year. This is a moodier piece that features the string section. It has a bluesy groove, a cool vibe and some interesting and unusual percussion. That’s followed by Elmer Bernstein’s theme for Johnny Staccato. I love John Cassavetes, but somehow have never seen this show. Mark Doyle’s take on the theme combines rock and jazz. As I mentioned, there are two tracks that stray from the album’s theme. Apparently, these two were recorded before the theme had been chosen. The first of those tunes is Frank Zappa’s “America Drinks And Goes Home,” a seriously strange and delightful choice. Mark Doyle’s rendition has a mellow, kind of sweet vibe, feeling almost like a lullaby at first before taking on a late-night jazz feel. I am particularly fond of Doyle’s guitar work on this track. And in the second half of the track, the strings are prominent.

We then get into the album’s original compositions. The first, “Thirteen Crimes,” in some ways feels like a slightly twisted television theme, like to a show that didn’t make it beyond the pilot stage because its main character was too disturbed to appeal to a mainstream audience. Perhaps it is the detective himself who is committing these crimes, or is enjoying them in some fashion, not really wanting to catch the criminal. It also has a somewhat manufactured feel, an artificial vibe that actually adds to its weirdness, to its unsettling quality. That’s followed by the disc’s other original composition, “Noir Alley,” which has a cooler, sly style, and features a totally enjoyable bass line. This is another of my personal favorite tracks. The main character of this one is a guy you can’t help but like, perhaps even want to emulate. His style, his movement. Then there is a strange, haunting vibe to it nearly halfway in, because the case the guy is on is anything but straightforward. An element of the supernatural, perhaps? Or maybe it just seems that way for a bit, before the pieces fall into place. Because then when the guitar leads the piece, it feels more grounded, more certain. We then get Dave Grusin’s theme to “It Takes A Thief,” which is another of the album’s highlights, in large part because of the work on strings. I am always a sucker for cello, and Kate LaVerne’s work on cello is prominent early on. Then the track takes a turn, becoming a funky number. The album concludes with “Everytime,” the other track outside of its theme. This one was written by Louis Cole, and is a fairly mellow tune.

CD Track List
Watching The Detectives: Guitar Noir III is scheduled to be released on August 6, 2019.
Posted by Michael Doherty at 4:43 PM