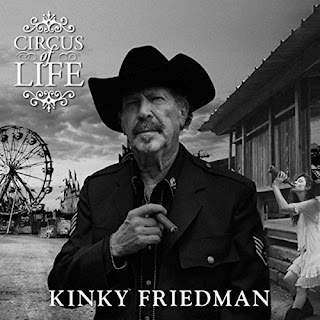 Last year Kinky Friedman released Circus Of Life, a seriously strong album from start to finish. Every track on this disc is worth hearing. Joining him on this release are Joe Cirotti on guitar, mandolin, steel guitar, bass and fiddle; “Little Jewford” Shelby on piano; Augie Meyers on accordion; Mickey Raphael on harmonica; Clay Meyers on percussion; and Jim Beal on bass.

The album opens with “A Dog Named Freedom,” a moving, kind of sweet folk song that mentions both Bob Dylan and Willie Nelson. “We’ve got a long way to go/But, good lord, don’t you know/There ain’t no quit in either one of us.”  There is something delightful about this odd tune, and it features some good work on both harmonica and accordion. That’s followed by “Copper Love,” which has a classic folk sound and a friendly, intimate vocal delivery. It also features some nice stuff on mandolin, which helps give this song a bright, positive vibe.

“Jesus In Pajamas” is a delightful song. I am not sure exactly why, but the phrase “ancient town of Dallas” made me burst out laughing the first time I heard this song. There are several other humorous lines and images, yet this song also ends up moving me, particularly because of lines like “Where the only whole heart is a broken one/And the only true love an unspoken one.” Then “Circus Of Life,” the album’s title track, has a much different vibe, and is a beautiful song. “On the phone she told him/She’d really like to hold him/But sometimes she said she wished that she were dead.” While the previous song had me laughing out loud, this one had me fighting back tears. Oh man, lines like “He’d slipped right through the angel’s tiny hands” destroy me. What an excellent song.

“Autographs In The Rain (Song To Willie)” will cheer you up with its rhythm. I dig that bass line. “Nothing in this world is quite as easy as it seems/When you struggle half a lifetime to catch up with your dreams.” This song includes a bit of Willie Nelson’s “On The Road Again,” the second track on this album to make reference to that particular tune. I like this song, though I have mixed feelings about the sound effect of the crowd cheering, and the end seems a bit drawn out. That’s followed by “Back To Grace,” a song that has a serious sound but a certain humor in lines like “They said, do you want salvation?/I said I’d rather have a beer.”  I appreciate the humor of that line, but as the song goes on, we learn that alcohol has destroyed him. “She said, I’ll be there at your funeral and I’ll wear my wedding dress.”

In “Sister Sarah,” the line “Sister Sarah, full of grace, help me find a parking place” makes me smile. And anyone who knows me knows exactly why. I also love these lines: “She could have been an angel/She could have been a whore/Or maybe just a girl who left her halo at my door.” And these: “Things aren’t as dark as they appear/Nor are they quite as bright as they might seem.” Then the opening lines of “Song About You” are beautiful and heartbreaking: “I walk by the ocean where I once held your hand/And I think of all the things we didn’t do/I wonder why you’re not here, making footprints in the sand.” It seems like a song of regret, yet has a feeling of hope. “Zoey” is a kind of sweet folk tune. “Zoey, Zoey/I know you’ll never be my wife/Zoey, Zoey/I want you always in my life.” The album then concludes with “Sayin’ Goodbye,” which seems a fitting closing number. The percussion gives this one a different vibe, a different style. “Sayin’ goodbye isn’t easy/For a fool with a tear in his eye/All of my life I’ve been busy/Dreaming of sayin’ goodbye.”

CD Track List
Circus Of Life was released on July 6, 2018 on Echo Hill Records.
Posted by Michael Doherty at 10:58 AM