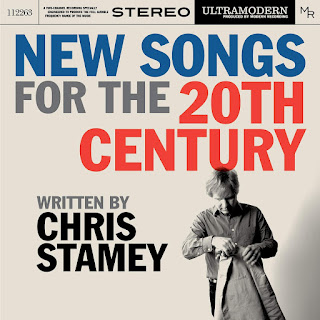 I am always interested in whatever Chris Stamey is working on, from The dB’s to his solo career, from his albums with Peter Holsapple to his guest appearances on the albums of other artists, and his work as a producer. His new double album, New Songs For The 20th Century, is an unusual offering. For this one, he has composed new songs that sound like standards from the past century. And to give the songs even more of a standard flavor, Chris Stamey has invited several different vocalists to deliver the lyrics. So this two-disc set really feels like a collection of standards. The music is a combination of jazz and pop, with both male and female lead vocalists, and plenty of excellent guest musicians, including Branford Marsalis and Bill Frisell. This is a good opportunity to leave the present behind (something that certainly holds a lot of appeal for most of us), and enjoy some damn fine music.

The first disc opens with “Manhattan Melody (That’s My New York),” which is so cool right from the start. This is a bright jazzy pop number featuring Django Haskins on vocals and the incredible Branford Marsalis on saxophone. Ah, that sax sounds so good, particularly during the delightful lead section in the second half of the track. There is also some really good work by Jim Crew on piano. This tune almost makes me feel positive about New York. Almost. That’s followed by a mellower number, “It’s Been A While,” with Django Haskins again on vocals. There is a nostalgic quality not only to the sound, but in the lyrics, as he’s looking backward to a perhaps better time after running into someone from his past. Doing that always makes us take stock of our present lives, doesn’t it? And it offers an opportunity to make comparisons. This track too features some good work on saxophone, this time by Elijah Freeman. Stephen Anderson is on piano, and delivers a cool lead halfway through.

Caitlin Cary sings on “I Don’t Believe In Romance,” a pretty song that features more nice work by Stephen Anderson on piano. I love his lead part that begins around the halfway mark. There is also a good bass line to this one. Will Campbell is on sax, and there is some wonderful work from the string section. This one has a catchy element, and has really grown on me, becoming one of my favorite tracks of the first disc. As with many of the songs on this release, the lyrics feature someone looking into the past. “Those days are gone, like yesterday’s songs/I hear the words you say/But nothing could make me sway.” Bill Frisell plays guitar on “What Is This Music That I Hear,” a song that mentions Gershwin in the present tense, taking us back to that time with its lyrics as well as with its sound. “And Gershwin is five thousand miles away.” This track features some excellent stuff by John Brown on bass, and Will Campbell provides another good lead on sax. Kirsten Lambert provides a gentle, sweet vocal performance.

Accomplished vocalist Nnenna Freelon joins Chris Stamey on “Occasional Shivers,” her performance having both a sexy and wistful quality. “I must admit, when I’m near you/I still feel occasional shivers.” This track has a gorgeous, late-night vibe. Will Campbell is on saxophone, and there is also some good work from the string section. That’s followed by “On The Street Where We Used To Live,” which has kind of a bright feel, though lines like “There’s the bookstore where we first met, now a new internet café” and “On the street where we used to live, nothing remains” are completely depressing. This has been on people’s minds lately, how the quirks of different cities are disappearing, and everything is turning indistinguishable. Streets are losing their identities. Sure, some of this could be called progress, but it’s so sad when you look for your past and can’t find it anywhere. This track features some cool percussion and a good vocal performance by Brett Harris.

“Your Last Forever After” is one of the disc’s most beautiful and moving songs. This one struck me the first time I listened to this album, and I love it more each time I listen to it. It features a memorable vocal performance by Caitlin Cary. Here is a taste of the lyrics: “I am your last forever after/I am your first glimpse of the moon/I am the memory you’ve forgotten/Your sudden déjà vu.” Josh Moore provides harmony vocals on this track. That’s followed by “There’s Not A Cloud In The Sky,” a fun, cheerful tune featuring an excellent vocal performance by Ariel Pocock. And check out Stephen Anderson’s work on piano. The first disc concludes with another of its most compelling tracks, “I Am Yours,” featuring Millie McGuire on vocals. I saw her perform this song with Chris Stamey back in February at The Federal Bar. It’s a gorgeous song, and was one of the highlights of her set at that concert. This is an excellent track to wrap up the first CD.

The second disc, labeled “Volume 2,” then opens with another song featuring Millie McGuire on vocals, “I Fall In Love So Easily.” This is a gorgeous, romantic piece, with Stephen Anderson accompanying Millie’s delicious vocals on piano. Elijah Freeman adds some nice work on sax. This was another that Millie performed at that concert in February. That’s followed by “Beneath The Underdog,” a song with a very different feel. It opens with some cool work by Matt Douglas on saxophone, with hand claps backing him. And soon the song develops a kind of funky, lively rhythm. Providing vocals for this one are Marshall Crenshaw, Don Dixon and Django Haskins. Sometimes this song strikes as me as a tune that could be in a musical. “In-tox-i-cho-cli-fi-ca-tion” also could be from a musical, though it has a different style. It’s kind of a goofy tune, a love song to chocolate, with Django Haskins providing the vocals.

“The Woman Who Walks The Sea” is a mellow tune with a relaxed vibe. Kirsten Lambert provides the vocals, and Jim Crew is on piano. “Lover, Can You Hear Me?” is a passionate, romantic number featuring Skylar Gudasz on vocals. Here is a taste of the lyrics: “And the day stretches out like it will never end/Far away from the reverie of night/But I pray that the dusk will bring you back again/To my arms.” That’s followed by “Pretty Butterfly (In My Dream),” a sweet song sung by Millie McGuire. This track features Mark Simonsen on vibes, and Laura Thomas on violin. The lyrics to this one also touch on night and day, and relate the coming of night to the return of a lover: “When the night has wrapped its arms around me/And the day’s a distant memory/I know you’ll be back again.” “And I Love Her” is another sweet, pretty tune, this one with Kirsten Lambert on vocals. I love her performance here. This track also features some wonderful stuff by Will Campbell on saxophone, and by Jim Crew on the piano, giving it a late-night vibe.

A few of the songs on this release mention famous musicians from earlier times. I noted that “What Is This Music That I Hear?” mentions Gershwin. So does “Unpredictable”: “Unpredictable, like April showers/Like a Gershwin tune.” However, this one takes place a little later, as the people in this song are seeing Jules et Jim, which was released in 1962. Then “I Lost Track Of Time” mentions Benny Goodman. Django Haskins sings this one. “And I lost track of the time/Back when you were mine/I wish I could somehow find/A way to make the hands rewind.” Again, there is a yearning to return to an earlier time that is present in many of these songs. The second disc then concludes with “Occasional Shivers.” It is listed on the CD as a reprise, but it’s actually the full song again, but with a different singer. This time Presyce Baez takes on the vocal duties. And Dave Finucane is on saxophone.

Disc 1
Disc 2
New Songs For The 20th Century was released on June 28, 2019 through Omnivore Recordings.
Posted by Michael Doherty at 6:02 PM