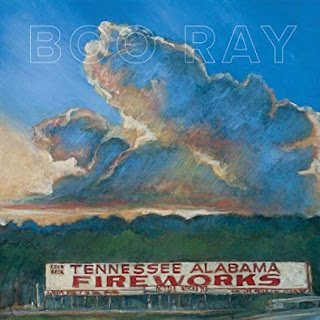 These days, seeing the word “Alabama” in print makes me cringe. And if you have been paying attention to the news, it probably has the same effect on you. But don’t let that keep you from listening to Tennessee Alabama Fireworks, the latest release from Boo Ray, a singer and songwriter originally from North Carolina. He delivers some damn good songs, with a powerful, honest, somewhat gritty sound, the sound of someone in motion, the sound of heat, the sound of real connections. This album features all original material, written or co-written by Boo Ray. Joining him on this release are Matt Workman on guitar and backing vocals, Sol Philcox-Littlefield on guitar, Paul III on bass and vocals, Justin Cromer on drums, Smith Curry on pedal steel, and Jon Coleman on keys. The album was produced and mixed by Noah Shain, who also produced his 2016 release Sea Of Lights.

“A Tune You Can Whistle,” the disc’s first track, starts off with a kind of sweet sound. But it isn’t long before the song kicks in to become a very cool country tune, with energy and attitude. “Ain’t nobody at the wheel,” Boo Ray repeats, but his voice is certainly at the wheel of this track, driving us all forward. Where exactly are we going? There is weirdness all around, so the options all seem mad. “One nation under the influence/Of a cellphone computer screen.” This track’s lyrics provide the album’s title. Then suddenly there is a slower section, the first lines of this part delivered as spoken word. When it kicks in again, the song features some nice work on guitar and then pedal steel. “A Tune You Can Whistle” was written by Boo Ray and Noah Shain, and is followed by “Don’t Look Back,” which has a somewhat mellower vibe to start. “How about we just keep going/How about we don’t look back.” Oh yes, those lines hold a lot of appeal. That idea always did for me. This is a song I plan on adding to my road trip play list. It feels about time for a road trip, doesn’t it? “We could call the highway home.”

“Gone Back Down To Georgia” has a brighter sound, almost a party atmosphere. He sings, “I should’ve never gone back down to Georgia.” Yup, that’s how a lot of folks feel about Georgia these days, what with that hateful law against women and their health. If that law goes into effect in January, businesses should be pulling out of the state. There are more fun vibes in “20 Questions,” which has a bit of a classic sound that I dig. I am particularly fond of that bass line. There is also some nice stuff on keys. “What’s the point in asking me questions/If you know the answers I’m gonna say.” That’s followed by “She Wrote The Song,” which has a more serious, somber and sober tone. “I didn’t stand a chance, she didn’t have a choice/It’s the pain pills that took away my sweetheart.” This is a really strong track. Then “Dee Elle” is a short instrumental track with a pretty country sound. I love that pedal steel.

“Outrun The Wind” opens with what is a cliché, “If you don’t stand for something, you could fall for anything,” but is also a line that feels particularly apt these days. It continues to amaze and disgust me that a third of the country could fall for a shameless swindler, and it is even more shocking that these morons are still under his spell. Anyway, this song has some good lyrics, and a compelling vocal line. I like the rhythm of the vocal line, particularly in lines like “Just let go/Let love show you/What you don’t know/About your own soul/Just slow down/Hear the sweet sound/Of the right here/And the right now.”  By the way, on the CD case, the order of the songs is incorrect. It lists “Outrun The Wind” before “We Ain’t Got The Good,” when actually it comes after it. A glance at Boo Ray’s arms will tell you that he has a genuine appreciation for tattoos. So it’s no surprise that he concludes this album with a song about tattoos, “Skin & Ink.” I am not into tattoos at all, but I can appreciate and enjoy this tune. “She was looking at the naked girl peeking out beneath my sleeve/She said, damn, that girl there on your arm, it should be me.” He then tells her, “There might be a little room on the other arm for you.” Ah, love.