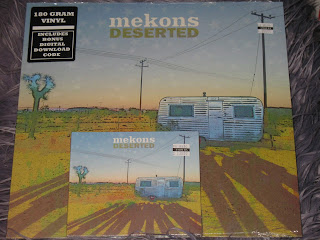 Like a lot of people here in the United States, I was turned on to The Mekons through the documentary film Revenge Of The Mekons. Watching that movie, I fell completely, madly and irrevocably in love with the band, and needed to begin collecting their albums immediately. I had several decades’ worth of music to catch up on (they’d been recording since the late 1970s). Why hadn’t someone turned me on to this band sooner? Well, my collection is still far from complete, but last night I was able to add to it, when the band released its new album, Deserted. I went straight from work to Amoeba Music, where the album was available on both CD and vinyl. I couldn’t make up my mind which format was preferable, so I did the only logical thing and bought both. Before I even began listening to it, the album made me smile, for I saw on the inside of the CD case that the band members had adapted their names to fit its desert theme, with Jon Langford becoming Joshua T. Landfrog and Sally Timms becoming Sahara Timms. This band can rock you, it can move you, and does both with a good sense of humor. I expected great things of this album, and the band certainly delivered. All of the tracks are originals.

Deserted begins with “Lawrence Of California,” which bursts open with a great, bright and palpable energy, and immediately takes over with that delicious, powerful folk punk rock, all with a healthful dose of humor, the track’s title obviously a play on Lawrence Of Arabia. “Stubborn silence grows/Flat on your back in the dark/Red thorns burst through fossil bark/To clutch and to cling.” The song has the atmosphere of a party out in the wilderness where there is a certain amount of danger, which is likely part of the appeal. There is some great stuff on violin, and at the end the track trails off into electric guitar land. Hey, do these guys yell “Scooby dooby doo” at one point, or am I crazy? The desert theme then continues with “Harar 1883,” which has a cool vibe and takes its inspiration from a portion of Arthur Rimbaud’s life. Here is a taste of the lyrics: “Back home they think I’ve disappeared/Yes, it’s true that I deserted/That Dutch army in the east/I was not troubled in the least.”  Interestingly, this one kind of trails off at the end too. Then “In The Sun/The Galaxy Explodes” establishes a really good punk vibe right at the start, with a bass line that I love, and after a minute some sweet-sounding vocals are layered over that, creating a wonderful texture and appeal. There is a kind of dance pop thing here too; the music is exciting and fresh. “Into the edges of forever.”

“How Many Stars?” is a beautiful song, one that was released online in the days leading up to the album’s release, and one of the many reasons I was excited to pick up this disc. As beautiful and moving as this song is, there is still humor in a line like “For I am pickled, I am done.” Yeah, it’s a folk song about death. Oh, poor sweet William, he never survives a song, and he’s not the only casualty here. That’s followed by “In The Desert,” a strange and compelling song, part industrial, part ethereal, and totally wonderful. A few lines of this one were taken from Percy Bysshe Shelley’s poem “Ozymandias.” By the way, this album was recorded just outside the Joshua Tree National Park, a fitting location for an album of songs in which the desert plays an important role. Or did that location inform the music? “Mirage” is raw and exciting. This track takes no prisoners, but completely obliterates the landscape, and I just want to dance in the destruction. I love the shouts of “Where are you hiding?” I respond, but so far they haven’t found me. Come find me! “This is as good as it’s going to get/Between the mirage and the sunset.”

“Weimar Vending Machine/Priest?” rises from the smoldering surface of the world to survey the survivors. It has a dark and haunting sound, but with humor, as in the line “Iggy pops up in Berlin.” It also makes a direct reference to “Alabama Song” (also known as “Moon Of Alabama”), a song that The Doors covered. David Bowie also performed this song, and this track has a definite David Bowie vibe. And then suddenly we’re in a goofier land, a delightful twist that makes me happy every time I listen to this album. (By the way, in keeping with the desert theme, I should mention that the song’s title reminds me of one of my favorite moments from Head – where Micky Dolenz is in the middle of the desert, delirious from thirst, and comes upon a soda vending machine, which then turns out to be empty.) We then get “Andromeda,” which has a more cheerful, pleasant, happy, easy-going sound. I particularly love the work on violin, which makes this one of my favorite tracks. The album concludes with “After The Rain,” a track that was released in advance of the album, and is another favorite of mine. This beautiful song is more in the folk realm, and is oddly comforting. “Come back later, come back (come back again)/You should see us after the rain.” This track includes a trippy instrumental section.