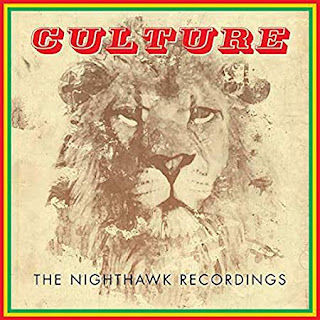 In these days of rampant racism and gun violence, when our country is run by a criminal, we are in need of the good grooves and social consciousness of reggae music. Culture is a Jamaican group that formed in the mid-1970s, and put out quite a few records. In 1982, a reggae compilation titled Calling Rastafari was released. The title track and two other tracks on that record were by Culture. Now the new release, The Nighthawk Recordings, collects those three tracks and four previously unreleased tracks, all of which were written by Joseph Hill. At the time of these recordings, Culture was made up of Joseph Hill, Albert Walker and Lloyd Dayes, and on this release they have two different (and incredible) bands backing them: Roots Radics on the first three tracks, and The Wailers on the other four tracks.

The disc opens with “Calling Rastafari,” and immediately its groove raises my spirits. The religious aspect of reggae music has never appealed to me, but has also never kept me from enjoying the tunes. After all, the music has such a positive vibe. “Many will be called, I say/Many will be called, ten thousand/Many will be called/But few shall be chosen/But few shall be chosen.” “Calling Rastafari” is followed by “Dem A Payaka,” which has an incredibly cheerful sound and vibe. I totally dig this song. “Rich man, move your hand and give the youth a chance/Give the poor man a chance to get some help.” The last of the three tracks from Calling Rastafari is “This Time,” and this one too has a vibrant sound, but with a sincere and serious edge. A different version of this song was actually the first to ever be released by Culture, on a 1976 single released in Jamaica. There are a lot of interesting differences between the two versions. For example, the earlier version has the line “No more blood in a Babylon,” whereas in this version the line is “Blood, blood, blood in a Babylon.” Likewise, the line here is “Fire, fire, fire in a Babylon” rather than “No more fire in a Babylon.” And these lines of course hold a lot of appeal: “This time, no other time/This time, we are not waiting any longer.”

The other four tracks on this disc were recorded in 1983, and until now were unreleased. The first of the previously unreleased tracks is “Can They Run,” which has a kind of exciting, cool vibe, and features a horn section, which I love. And lines like “They cheat and they lie to the people every day” are certainly relevant to our current government and the entire Republican Party. “Can they run?/Can they hide?/Can they ever step aside?” We’ll see.  Plus, this track features an interesting and wonderful instrumental section. This is my favorite track on the disc. How was it left unreleased for so long? It is followed by a mostly instrumental version of the same song, so obviously the focus is on the groove. And it is such a great groove. The vocals come in for the last minute or so of the track. Then “Mister Music” too has an incredibly bright, happy vibe, and features more nice work on horns, plus some wonderful touches on percussion. The disc concludes with a different, largely instrumental version of “Mister Music.”

CD Track List
The Nighthawk Recordings is scheduled to be released on CD on April 12, 2019 through Omnivore Recordings. A limited edition vinyl release is going to be part of Record Store Day on April 13, 2019 (yeah, Record Store Day is earlier this year).
Posted by Michael Doherty at 8:22 PM