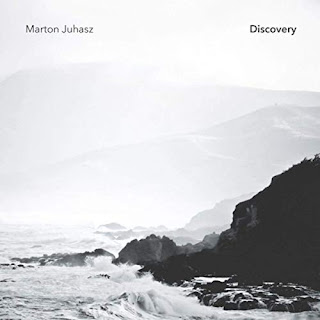 Jazz can take us to some unexpected and interesting places, as drummer and composer Marton Juhasz proves on his excellent new release, Discovery. Marton Juhasz is from Hungary, and has studied in London and Boston, and performed throughout Europe. In addition to his work as leader, he is part of the Alan Benzie Trio and Euro-African Playground. So, yes, he has some experience. The musicians playing with him on Discovery include Sergio Wagner on trumpet and flugelhorn, Paco Andreo on valve trombone, Enrique Oliver on tenor saxophone, Szymon Mika on guitar, Olga Konkova on piano, Danny Ziemann on upright bass, and Yumi Ito on vocals.

This unusual jazz album gets off to an appropriately unconventional start with “Sea Of Uncertainty,” which is an interesting vocal piece that feels like the spiritual warm-up at an alien church at the edge of reality. A strange way to start the album, to be sure, particularly for a drummer. But it has an arresting sound, working to pull us in and leave off whatever else is going on around us. This short piece is followed by “The Curve,” which starts off as a pleasant, smooth tune, and soon becomes exciting, almost dangerous, as the horns take us into another place, until you’re not certain what’s around the bend. What peril are those horns summoning, bringing upon us? There is plenty of great work on drums, as well as some wonderful stuff on keys. It is interesting how on this album the vocals are used as another instrument, expressing much, but not in words, particularly on a track like “Little Prayer.” This one is beautiful, especially that stunning section with vocals and bass. The song then builds again from there, going in another direction, the horn becoming the dominant voice, taking us on a journey. And then we’re in some distant, dark area of the ocean with “Levian,” a track with a lonesome quality, and I am unsure whether we’re drowning or floating. I love those deep bass notes, vibrating in my chest, and I’m hopeful.

“Industry” is a strange and compelling track. When it begins, it feels nothing like its title, but rather like an organic celebration on a beach or somewhere, with a strong human quality. But then other elements are added, and seem to intrude, an eerie combination of sounds and realms. I love the juxtaposition. It feels like it’s shifting into nightmare territory as it continues, as it becomes unhinged, as it comes apart, and we fall into the holes left behind, warped and lost. Then “Stino” establishes a groovy and delicious rhythm on bass and drums. This one feels like pure fun, perhaps to bring us all back together after the previous track, and it features some nice vocal work. That is followed by “Wolves Gather Under A Winter Moon,” a track that warns of the possibility of danger, reminding us we are out of our element.

“Spellbound” is the only track on this album to have lyrics, yet interestingly has an improvised feel. The words come slowly, with a dreamlike quality, fitting the song’s title: “In the night/When the darkness surrounds her/She slowly descends from the stairs/That lead to the ballroom.” This song takes on a romantic sound when the horn leads, its beauty holding us close. That’s followed by “Camels In The Sky,” which at first like it could be the theme to some cool 1960s detective television program. And then it just gets better from there, sometimes with a wonderfully loose vibe. The vocals in “Strange Glow” have an odd, unsettling feel, and work in contrast to the bass, which keeps us grounded in some semblance of normalcy, creating an interesting dynamic. The album concludes with “Run,” which takes tentative steps into an uncertain world, though the brushes on the snare somehow keep us moving forward, not as frightened or worried as we might be otherwise. Onward!