Matt Campbell: “The Man With Everything” (2018) CD Review 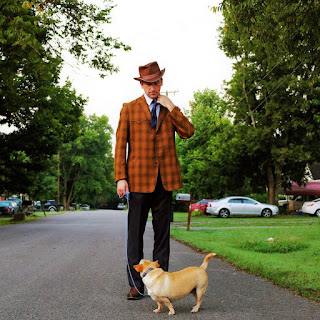 Matt Campbell is a singer and songwriter originally from Colorado, and now based in Nashville (Nashville, Tennessee, that is – more on that in a bit). His new studio album, The Man With Everything, features mostly original material. However, many of these songs were previously included on live albums such as 2014’s Live At The Old Town School Of Folk Music and 2016’s For The People. Many musicians join him on this new release, including Mike Wolf on guitar, Jason Verstegen on guitar, Keenan Wade on mandolin, Brad Albin on bass, John England on bass, Andy Gibson on pedal steel, Christopher Bauer on pedal steel and dobro, Calvin Conway on harmonica and backing vocals, Mark Fredson on piano and organ, Robert Gay on trumpet, Christian Hayden on drums, and Asa Lane on drums.

The album opens with “The Night That I Found Jesus (Down At Robert’s Western World),” a good, playful country song that was previously included on For The People. This version has quite a different sound from that earlier rendition, what with the full band including pedal steel. This song includes some humorous lines about finding Jesus at the famous country bar (yeah, it’s an actual place). But the lines that really struck me the first time I listened to this song come near the end: “Keep coming home to nothing/It won’t matter where you’ve been.” Those are excellent lyrics. There are more religious references and imagery in the following track, “Pillar Of Fire,” an intriguing song that was included on both Live At The Old Town School Of Folk Music and For The People. The title itself, of course, is a religious reference, a pillar of fire being a manifestation of the presence of the deity. This new version is different from both of the earlier versions, those being more strongly in the folk realm, while this is a country rendition.

The first line of “Trading Teardrops” is delivered a cappella: “I don’t know that it’s over, but I’m leaving.” The band comes in toward the end of the line, almost like it’s catching up with him, which gives the song an honest and immediate vibe, like he’s just thought of this, like we (and the band) are catching him in a moment. This song has that glorious sad country sound that is somehow always appealing, his vocal delivery full of perfect heartbreak. This song was also included on For The People, as was the following song, “Christmas In Nashville.” Yes, Christmas is coming, whether we want it to or not. As far as the stores are concerned, it’s already here. And so are Christmas albums and songs. This holiday-related tune plays on the fact that there is another Nashville in Indiana (see, I told you I’d get back to that). And no, I didn’t realize there was a Nashville in Indiana, though I may have driven through there back in 1995. This song, like “The Night That I Found Jesus,” mentions actual venues, such as Mike’s Dance Barn. “And the band is spinning yarns/Down at Mike’s old Dance Barn/I’m waltzing with the redhead Suzanna/And them old Broadway lights/Shine just as bright/At Christmas in Nashville/Indiana.” There is something sweet in this song’s tone.

I immediately love the whole vibe of “Twice As Big,” with its soothing, cheerful island sound. It’s also a bit jazzy, even before the horn comes in. This is kind of a wonderful tune, and it gives the album its title in the line “The man with everything may yet be empty still.” Then you might ask, how does this country swing? Right now I wouldn’t even want to attempt to answer that question. But Matt Campbell gives it a stab in “That’s The Way.” “Take a punch/Learn to throw one too/That’s the way this country swings.” This song was also included on For The People (by the way, that album was recorded in the summer of 2015, more than a year before the country turned ugly). “It’s Ours” was also included on For The People. This one is more strongly situated in the folk realm, and has kind of a sweet feel. “Look at our living room chairs/They’re nothing alike, and somehow still a pair/Yeah, with you, babe, no bridge is too far/It ain’t much, but it’s ours.” I particularly love the line about the chairs, because you get the feeling that the line also describes the couple themselves.

The album’s only listed cover is Bob Dylan’s “Simple Twist Of Fate,” a song from what I still consider Dylan’s best album, Blood On The Tracks. Matt Campbell gives us a good country rendition, perhaps not as soulful as, say, Jerry Garcia Band’s version, but good. That’s followed by “More Than Memories,” which begins with some delightful whistling. Yup, it has a cheerful vibe from the start, which I appreciate. “While the moments we remember may be fleeting/The spaces in between can seem so long.” Matt also included this song on For The People. It is the last song on that album, and is the last listed track on this one too. However, there is a tenth track that is not listed on the CD case – Roy Acuff’s “Back In The Country,” the album’s second and final cover. It’s a good, lively rendition.

CD Track List
The Man With Everything is scheduled to be released on November 9, 2018.
Posted by Michael Doherty at 10:21 PM