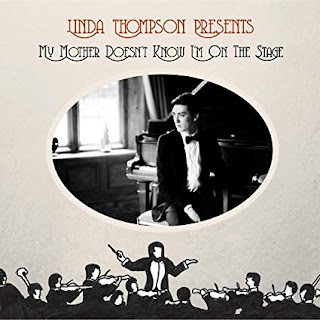 Take a break from our horrid reality, and step into a delightful, humorous world of old music halls with Linda Thompson’s new release, My Mother Doesn’t Know I’m On The Stage. It’s a (mostly) live album of some classic tunes, featuring a lot of special guests, including Martha Wainwright and Teddy Thompson. These tracks, with a few exceptions, were recorded in May of 2005 at the Lyric Hammersmith in London, the singers backed by Michael Haslam on piano and snare, Sam Lakeman on piano, George Hinchliffe on ukulele and bass, and Roger Digby on concertina. These songs are humorous, as I mentioned, but also heartbreaking at times; these are songs from a better world. So pour a drink, gather around an old upright piano, and sing some tunes, at the top of your lungs if you so desire, without embarrassment or pride, but just for the bloody joy of it.

Linda opens this disc with “I Might Learn To Love Him Later On (Tra-La-La),” a track which is adorable from the start, with that piano part (that’s Michael Haslam on piano). Linda is clearly having fun with this tune. “He swore at me the other day, he did upon my life/Called me a silly something just as though I was his wife/Tra-la-la-la, that shows he loves me.” (By the way, the “Tra-la-la” reminds me of a song I used to hear folks sing at a little hall when I was a kid – “Seven Old Ladies.”) And there is a laugh in her voice as she sings, “His language will be shocking/I’ll just gag him with my stocking/I know he’s clean and tidy/Because I wash him every Friday/I might learn to love him later on.” Then Martha Wainwright sings lead on “Beautiful Dreamer,” one of Stephen Foster’s most beloved compositions. She delivers a gentle, gorgeous rendition, backed by Michael Haslam on piano.

“My Mother Doesn’t Know I’m On The Stage,” the album’s title track, is presented by someone well-acquainted with acting and the stage – Colin Firth. This track is ridiculously fun, and is one of the tracks not recorded live; it was recorded at Helicon Mountain Studios in London, with Colin backed by Steven Large on piano. “The chaps I meet outside know I’m an actor/But I never breathe a word of it at home/So my mother doesn’t know I’m on the stage/It would break her poor old heart if she found out.” That’s followed by another track that was not recorded live, “London Heart,” which strikes a more pensive and sober note. This one is performed by James Walbourne solo on guitar and vocals (with a bit of whistling as well), and – unlike the other tracks – is an original tune. “Born and raised I was in the city that can never be torn apart/Now I’m a stranger living far across the sea/Oh, woe is me/My London heart cries constantly/I try to sleep, but it won’t let me be.”

Linda Thompson gives us a beautiful and captivating rendition of “Good-bye Dolly Gray,” on which she is backed by Michael Haslam on piano. That’s followed by “I Wish You Were Here Again,” sung by Bob Davenport, backed by Roger Digby on concertina. This is a moving number, and Bob Davenport’s vocal performance is excellent. “I wish you were here again/Your long absence fills me with pain/Your voice and your smile/Live with me all the while/I wish you were here again.” Justin Vivian Bond is a compelling and delightful force sent here by gods who certainly have a sense of play. There is a bit of funny stage banter at the beginning of the track as Bond introduces “A Good Man Is Hard To Find.” Bond then takes that energy into the performance of the song, particularly on a line like “Just when you’re thinking he’s your pal, you find him fooling around with some other gal,” which is delivered almost with a growl. Justin Vivian Bond is supported by Michael Haslam on piano and George Hinchliffe on ukulele.

I was turned onto Teddy Thompson through his performance in the 2005 Leonard Cohen documentary, Leonard Cohen: I’m Your Man, in which he did an excellent rendition of “Tonight Will Be Fine.” On this disc he delivers another beautiful and moving vocal performance, with “Here Am I Broken Hearted.” Teddy Thompson also gives us “Burlington Bertie From Bow,” showing us a very different side of him, with a different style and tone, and does an absolutely wonderful job with it. This humorous tune was also performed on The Muppet Show. Teddy Thompson is accompanied by Michael Haslam on piano and George Hinchliffe on bass. Teddy Thompson’s third number is “Brother, Can You Spare A Dime?” This is a serious, thoughtful, earnest rendition, with Teddy playing acoustic guitar, accompanied by Michael Haslam on snare drum.

John Foreman sings “If It Wasn’t For The ‘ouses In Between (Or The Cockney’s Garden),” accompanied by Linda Thompson on harmony vocals. This one is delivered a cappella, and is among the tracks not recorded at the concert. “The Lark In The Clear Air,” sung by Cara Dillon, is one of the best tracks. She has such a gorgeous, light, glorious voice, and is backed by Sam Lakeman on piano. That’s followed by “Wotcher! (Knocked ‘Em In The Old Kent Road),” sung by Roy Hudd, with Jools Holland backing him on piano. This track was not recorded live, but is from a BBC documentary titled Jools Holland: London Calling. The CD concludes with the ensemble singing “Show Me The Way To Go Home,” a song I first learned from Jaws when I was a kid.

CD Track List
My Mother Doesn’t Know I’m On The Stage was released on September 28, 2018 through Omnivore Recordings.
Posted by Michael Doherty at 1:27 PM