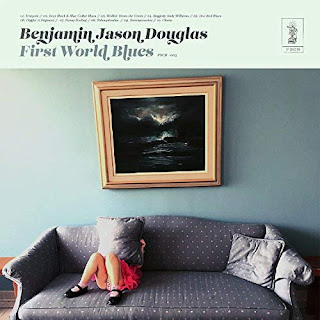 The CD gets off to a great start with “Tentpole,” which has a fantastic raw, kick-ass country sound mixed with gospel. There is something devilish and something glorious in this lively country gospel song. “Down through the valleys below/I’m a stranger in a strange land/Never too far from home.” Hey, doesn’t this make you want to be a believer? Well, a believer in the healing, uplifting power of music, to be sure. It’s working for me. This track includes a bit of “Amazing Grace,” which fits right in. There is even a section with the vocals supported by just percussion, something that I still find immensely appealing. “Tentpole” is followed by “Beat Black & Blue Collar Blues,” a rough, rockin’ tune in which Benjamin Jason Douglas sings “I can’t win no matter what I do/I’ve got them beat black and blue collared blues/Got a brand new demotion at a brand new job.” I also really like this line: “Working nights to keep the lights on.”

Benjamin Jason Douglas then switches gears for “Walkin’ Down The Grain,” which has a deliciously dark, haunting folk sound, with a raw vocal delivery. This is the voice of someone who has experienced some harsh and hard days on the land, the voice of someone facing the end of his family’s farm. “Now I fear God and the devil/But fear for my family most/They put their hopes in me/And I put mine in the silos.” The song has a lonely, doomed sound.

The phrase “Raggedy Andy Williams” caught me by surprise the first time I put this disc on. Obviously, I hadn’t been looking at the track list, for that’s the title of the song, a song about the end of a marriage. And actually the title is similar to “Beat Black & Blue Collar Blues,” combining two ideas with a common word, something I like. I also like the lines “You can have the records/And the player too/’Cause I can’t hear them now/Without thinking of you” and “I’ll just watch a horror movie if I want ghosts at every turn” and “You know, a man should never gamble more than he has left to lose.” That’s followed by “Doc Red Blues,” a wonderful folk tune with a perfect, laid-back vibe. Check out these lines, which begin this one: “I could write you a story, but not a check/I could give you the answer that you want to hear/But that don’t mean I’m correct.” Yes, this album features some damn good lyrics. In “Funny Feeling,” one line that stands out for me is “Striking out without a swing.” Perhaps it’s because I’m a big baseball fan, and my team is in the playoffs (go Red Sox!). I also love the song’s main line, “I’ve got a funny feeling I’m not over feeling funny over you.”

“Tchoupitoulas” is the album’s only track not written by Benjamin Jason Douglas. This one was composed by Joe Lekkas, who not only plays several instruments on this release, but also produced the album. This one has a fun, cheerful vibe, and is about enjoying things down in New Orleans. “We can have a relationship/We can have our fun/We can have it all/We can have it all.” Yes! The CD concludes with “Gloria,” a compelling, engaging song that has more of a mellow folk sound. “But I just can’t keep it straight/If it’s mine or if it’s God’s will/I swallow all the hate/Just to keep from tasting the guilt.”