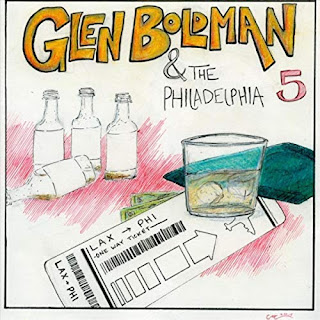 Glen Boldman is an accomplished drummer and educator who has a wide variety of influences, and thus also variety in the styles he plays. You can hear that on the self-titled release of Glen Boldman & The Philadelphia 5. The band for this release is made up of Ben Goldman on drums, Sam Nobles on bass, Kevin Cross on guitar, Blayne Salerni on trumpet, Andrew Bedell on tenor saxophone, and Ian Kurlan on vibraphone. All tracks are originals, composed and arranged by Ben Goldman.

The disc gets off to a great start with “The Slizzard.” I am digging this music from the moment it begins with that groovy, delicious bass line and excellent drumming. Give me some good drumming, and I am a happy boy. There is something playful about this track, and it goes through some interesting changes, like we’re traveling through different sections of a city, meeting different characters, with each of the musicians getting moments to shine. At one point, the trumpet takes charge, leading us all to some exciting heights. The entire thing has a sort of bright energy. Now if someone could just explain what the hell a “slizzard” is, everything will be fine. “The Slizzard” is followed by “December 2017,” which begins as a mellower, slower tune, dripping with cool vibes. Ah, that saxophone makes me want to settle into a night-long embrace with the most beautiful woman in the universe (good thing I happen to be dating her; otherwise that sort of action might lead to trouble). This track takes us on a nighttime journey. The vibraphone has a kind of magical quality here, doesn’t it? And the guitar has its own romantic bent, becoming rather eager at one point. But again, that sax!

“The Hip Dip” is kind of fun, like some elegant dinner party has been subverted suddenly by the band who decided to take over the proceedings and get things moving. I like the way the guitar supports the horn and then the vibraphone, before taking a really good lead. There is also some seriously cool work on bass, even before that great section of just bass and drums, which might be my favorite part of the entire disc. The CD then concludes with “Klezmerica.” Just judging from the title, I figured I would dig this piece, and I was right. As you might guess, it mixes klezmer and jazz. This track features some seriously good work on guitar. There is a surprising excitement to this tune, like halfway through, when the trumpet takes over. And the vibraphone, an instrument I don’t usually consider exciting, follows that intensity, which is wonderful. This track has joy from beginning to end.