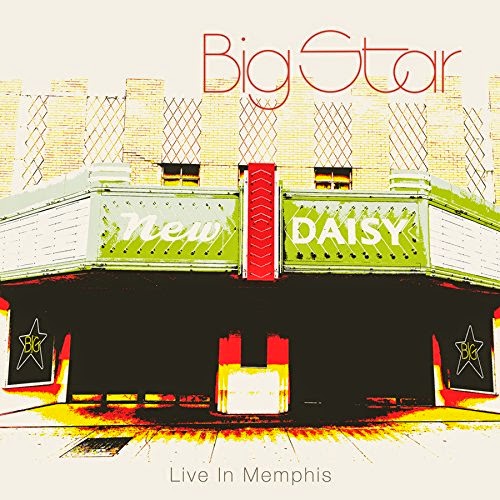 Live In Memphis is a recording of a show that Big Star did on October 29, 1994, when the band was made up of Alex Chilton on vocals and guitar, Jody Stephens on drums, Jon Auer on guitar and Ken Stringfellow on bass (the latter two being members of The Posies). There is a lot of great straightforward rock and roll, mixed with pop. This CD on Omnivore Recordings marks the first time this recording has been available. The show was also filmed and has been released on DVD as well. This CD includes liner notes from Danny Graflund, who recorded the show, as well as notes from band members Jody Stephens, Jon Auer and Ken Stringfellow.

The album begins with a bit of stage banter, and they kick off with a song from their first album, “In The Street,” a really good rock tune with a fun pop attitude. The sound isn’t perfect for this track. It’s a bit tinny. A note on the inside of the CD case explains that the sound for this track comes from the camera microphones rather than soundboard. They follow it with a couple of other tracks from their first album, first “Don’t Lie To Me,” which is more of a hard rock tune, with a bit of blues to its base and some raucous guitar work, and then “When My Baby’s Beside Me,” a good, fun, feel-good rock tune with the line “When my baby’s beside me, I don’t worry.”

They do play one song from original member Chris Bell’s solo work, “I Am The Cosmos,” and afterwards say, “One for the late great Chris Bell.” Chris Bell had left the group after the band’s first album, and died in 1978 (one of the many musicians who died at age 27).

Big Star does a good cover of The Kinks’ “Till The End Of The Day” performing it with the right energy, and delightful abandon on the drums and some good stuff on guitar. They follow it with what is probably my favorite Big Star song, “The Ballad Of El Goodo,” a sweeter tune. I just love the sound of the vocals as they repeat the line, “There ain’t no one going to turn me around.” This song was originally from the band’s 1972 debut release, #1 Record.

There’s just a tease of Bruce Springsteen’s “Fire,” due to an audience member calling out for it. (Though I have to wonder if the person might have meant Jimi Hendrix’s “Fire.” Who knows?) They also do a cool cover of the T. Rex tune “Baby Strange,” written by Marc Bolan.

They introduce “For You” by saying, “Jody’s gonna yodel for you a little bit now.” “For You” is one that Jody Stephens wrote and which was included on the band’s third album. It’s a love song; here is a taste of its lyrics: “Sometimes I can't help but worship you/I love you and all the things that you do/I thought I'd sit and write this song just for you/To let you know that I am thinking of you.” (Is it just me, or does the kick drum sound odd on this track?)

They do a good rendition of “September Gurls,” one of the band’s most famous tunes, written by Alex Chilton and originally included on 1974’s Radio City. It’s followed by one of my favorites, the quieter “Big Black Car,” written by Alex Chilton and Chris Gage, and originally included on the group’s third record. Something about this song grabs me. His vocal delivery has a strange matter-of-fact feel as he sings, “I can’t feel a thing/No, I can’t feel anything at all.” There is also a kind of slightly warped humor to it, like in the lines “Driving’s a gas/It ain’t gonna last.” At end of track Alex introduces the band.

This CD ends with a trio of interesting choices of covers, the first being “The Girl From Ipanema,” written by Antonio Carlos Jobim, Vinicius de Moraes and Norman Gimbel. They joke around a bit before the song, and their version is pretty short. They follow it with Dick Campbell’s “Patty Girl,” and then wrap things up with Todd Rundgren’s “Slut.”

CD Track List
Live In Memphis was released on November 4, 2014 through Omnivore Recordings.

Posted by Michael Doherty at 11:58 PM