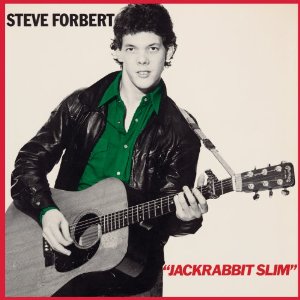 Last September Steve Forbert released a new album, titled OverWith You. He toured in support of that album, and I was lucky enough to get to see him perform. While he focused on his new record, he of course played some of his older material, a lot of which is now being re-released on an excellent two-disc set. This special re-issue of Steve Forbert’s Alive On Arrival/Jackrabbit Slim contains his first two albums in their entirety, plus lots of bonus tracks.

The first disc contains Alive On Arrival, Steve Forbert’s first album, originally released in 1978. It’s a pretty amazing debut album. Every track is strong, and each is different, from the catchy folk tune “Thinkin’” to the rock tune “You Cannot Win If You Do Not Play,” both of those featuring some nice work on harmonica. I love the vulnerability in Steve Forbert’s voice. There is a great combination of rough and sweet qualities, a bit like Rod Stewart, particularly on a song like “Settle Down.” (He reminds me of Rod Stewart on “House Of Cards” also, one of the bonus tracks.)

He can also write a good lyric, and create or evoke a very specific mood. Take “Steve Forbert’s Midsummer Night’s Toast” for example, with lines like “Here’s to people living lives that they regret/Work your fingers to the bone and sink in debt.” And yet with lines like that, there is this kindness to the song. And check out these lines from “It Isn’t Gonna Be That Way”: “If I were a god, I’d give you a clue/This minute would crack and I could go through.” There’s clearly no fluff here, and yet it’s a fun album.

Alive On Arrival opens with “Goin’ Down To Laurel,” one of his most well-known tunes. This song has such a great feel, but it’s the lyrics that really make me love it. “She is a fool for loving me/But she’s in love/And love’s a funny state of mind.” Right from the start, there is something endearing about him, about the way he presents himself and his material. It’s strange to look at his picture on this record, for he looks so ridiculously young, sometimes a surprise when listening to his music.

On a song like “What Kinda Guy” he goes for it with the gusto of Springsteen, yet with some of the humor of Jonathan Richman. As in the way he plays with language on this song on lines like, “What kinda guy am I really am?” This song is a lot of fun. Also a lot of fun is “Big City Cat,” a pop tune featuring David Sanborn on alto saxophone. He shows his sense of humor on this one too, with these lyrics: “There’s a man in the hall/It’s some kind of lunatic/He’s following me/He’s down by the john, so I can’t take a pee/I’m supposed to be happy.”

And between those two songs he puts the serious “It Isn’t Gonna Be That Way,” a kind of pretty song with a certain sadness, in which he sings about things that aren’t going to happen. “You think you can live and dream your own fate/You think you can wish and walk through the gate/Oh, it isn’t gonna be that way.” It’s always sad to hear or realize that the ideal state isn’t going to happen. This is one of my personal favorites on this album.

In “Grand Central Station, March 18, 1977,” he sings about playing at the train station, and creates that mood and atmosphere for the listener by presenting the song with vocals, guitar and harmonica rather than adding other instruments. He sings, “Well, think what you will, laugh if you like/It don’t make no difference to me/I’ll open my case, and I might catch a coin/But all ears may listen for free.” This song brings me back to Harvard Square and other stops on the red line in Boston, where all the folksingers would play.

This disc has five bonus tracks. My favorite is probably “It’s Been A Long Time,” with its catchy country rhythm. I fell for this song immediately. Here is a taste of the lyrics: “The summer was kind/And we were kids in the heat/And the moon was a high moon/Hey, it rose in the twilight/It’s been a long time.” Though I have to laugh and marvel when he sings, “I look around, I’m getting older/I’m 23 now.”

“Song For The South (Time’s Gonna Take Me Back)” also has something of a country feel, and it’s a sweet love song. He’s in the city, singing about the girl he’s longing to see. I love the way he describes her: “She’s been living with a brain full of sunset fire too long.” This track also features a nice harmonica section.

For some reason it’s that “chit chat chat” line that makes me really dig “Steve Forbert’s Moon River.” Seriously – every time I listen to it, that part delights me. The first CD ends with “Lonesome Cowboy Bill’s Song, another catchy little gem. This line sticks out for me: “I waited for love/I guess I wasted my time.”

Steve Forbert’s second album, Jackrabbit Slim, contains what is probably his biggest hit, “Romeo’s Tune.” He also certainly does some different stuff on this album, including adding a bit of a reggae feel to “Complications,” a song about all the common troubles folks have. The presence of horns on a song like “The Sweet Love That You Give (Sure Goes A Long, Long Way)” gives it quite a different sound from what had come before on the first album. His vocal delivery on that song is different as well, with a sort of urgency and power.  But he also gives us a sweet, straight-forward love song in “I’m In Love With You,” a tune which is helped by some nice backing vocals.

Jackrabbit Slim opens with what is still possibly Steve Forbert’s most famous composition, “Romeo’s Tune.” It’s such a wonderful song – a love song, as you’d guess from the title. There is a lot to love about this song. One thing I especially like is Bobby Ogdin’s work on piano – it is greatly responsible for the delightful feel of this song. But of course there are also great lyrics, like “Meet me in the middle of the night/Let me hear you say everything’s all right/Let me smell the moon in your perfume.” If you’re not familiar with this song, you definitely owe it to yourself to check it out.

This disc also includes a live version of “Romeo’s Tune” in the bonus tracks. It was recorded in New York in 1979.

“Say Goodbye To Little Jo” is another of my favorites from this album. This one, like “I’m In Love With You,” is helped by those great backing vocals.  But it also has a catchy groove. It’s a song urging someone to let a woman go, and it pulls no punches. Check out lines like, “You’ve shown so much of your hate/She’s seen so much of your greed/She’s taken shit for so long, yes, yes/That you ain’t got nothin' she needs.” And if that’s not clear enough, Steve sings the line, “She doesn’t love you anymore” several times at the end.

“Make It All So Real” interestingly fades in with horn, but then has a loose country feel, with the piano sort of responding to the vocals. The piano delivers this song’s catchy hook. “Make It All So Real” is a song about a singer, urging him to “Sing your song, make it hurt/Sing the tears, sing the pain/Make it all so real.”  Meanwhile the singer’s girlfriend in the back is looking into another man’s eyes.  “The crowd was stomping and cheering/She was breaking his heart.” The horn returns for a lead part in the instrumental section, which is really nice.

There is an alternate version of this song in the bonus tracks. That version is slightly longer, and doesn’t have that fade-in at the beginning. There are no horns in this version, and so it has even more of a country feel, especially with the slide guitar featured prominently in place of the horn. I think I actually prefer this version.

This disc has seven bonus tracks, totaling more than a half hour of extra music. The first, “The Oil Song,” has this pleasant, happy country folk feel, yet is about oil spills in the ocean. In the chorus, Steve sings, “Don’t buy it at the station, you can have it now for free/Just come on down to the shoreline where the water used to be.” This is an excellent song, definitely one of my favorites from this singer/songwriter.

“Oh, Camille” is also a really good song, in which he addresses a woman in Italy – “Oh, Camille, read all about it in my letter/Oh, Camille, ain’t got no jokes to tell, just lots of books to read/Wild hearts and traffic sounds/All pounding everywhere."


This special two-disc set is scheduled to be released on March 26, 2013 through Blue Corn Music.
Posted by Michael Doherty at 2:13 PM