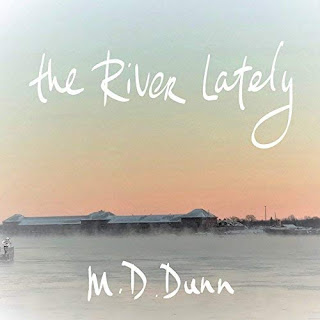 It’s a bit unnerving to suddenly find ourselves living in horrible times, among horrible people, and to not be able to predict when those times (and people) will come to an end. I honestly thought we were better than this, that we had progressed in some way. I was wrong. Being angry about it only seems to hurt me, but not being angry about it makes me feel guilty. And so I’ve been turning to music to help me through, and to remind me that, although a significant portion of the country has gone irreparably sideways, there are still lots of decent folks out there who are struggling with the same problems, the same anger, the same depression. Music tells us we are not alone. Music reminds us of what is truly important. I was turned on to M.D. Dunn’s music a couple of years ago, just before everything went wrong. His 2016 release Solace impressed me, and I was excited to hear more from him. His new album, The River Lately, features all original material, largely in the folk realm, but certainly not limited to that. This album contains some seriously excellent lyrics. But, perhaps more importantly, it is music to help us as we try to make sense of a world that lost its balance.

M.D. Dunn opens the new album with “The River Lately,” the title track. It eases in with a sweet folk sound on the guitar, and seems to kick in gradually, in stages, first taking on a cool, mellow 1970s vibe, like some of CSN’s mid-1970s work. Then the horn comes in, which is kind of a delightful surprise. I love the sound of this song, and the way it builds. But the lyrics are what really grab me. Check out these lines: “Have you been to the river lately?/You should see how high the water is now/Last time you couldn’t drown here if you’d been trying.” And these: “There are no shortcuts where we’re going/We’re going to have to play it through.” And these: “You probably have it all figured out anyway/Don’t let that keep you from trying.” How’s that for some good advice? The sax comes back in after this, and the song has kind of a nice little jam, which I dig. By the way, that’s Josh Norling, who plays both trumpet and saxophone on this album. “Hold on, hold on/With all those thoughts making noise all the time/Stick around for the punchline.” Yes.

“War In Me” feels like folk for the first few seconds, then comes in with a force, with an edge, which seems fitting for the song’s content. After all, turmoil within is going to affect what comes out. “You’re the sound I make when I dream/Another soul who is more than you seem.” What a line, eh? “You’re the sound I make when I dream.” This album is full of astute, intriguing lines like that. “War In Me” is followed by “The Story Begins,” which has a lighter, more playful vibe, in strong contrast to what we’ve just experienced. This track features more good work on saxophone. “When you arrive, the story begins.”

“Barn Swallow’s Dance” is the album’s first instrumental track. It’s strange, but sometimes when I listen to it, I feel it should have lyrics. I’m surprised when his voice doesn’t come in at some point. That being said, this tune has an uplifting vibe which I appreciate. The other instrumental track is “Dragonfly,” a pretty guitar piece that has a positive feel to it.

One of the album’s most important and timely songs is “The Cowardice Of Kings.” It is no secret that Donald Trump fancies himself a king, and that he has strange love affairs with dictators. He is a dangerous and doltish enemy of democracy, and thus an enemy of the United States, and he should be treated as such. Donald Trump is not mentioned by name in this song. But see if these lyrics don’t apply: “The cowardice of kings brings cruelty to the weakest/Go on and call him on it and you become his new enemy” and “The cowardice of kings makes everyone a traitor/Sees refugees as enemies and immigrants as invaders/Public dissent becomes a treasonable crime.” And this: “The cowardice of kings brings out the tyrant.” This song reminds us to “stick around” for “the weather will change.” Yes, but please hurry.

The first line of “Only In Summer” caught me by surprise: “All he said was she was pretty enough to be a stripper.” Before I could catch myself, I laughed aloud. M.D. Dunn follows that with these lines: “They used to say that back home/It never was a problem/He thought it was a compliment.”  And there is a really good line about thinking about what you say before saying it: “Every scene you’re in needs editing/Before it goes to air.”  This is a good country song, delivered with a passion, his voice once or twice reminding me of Brian Doser. The album closes with “We Need Everyone,” in which M.D. Dunn sings “We need you now/We need everyone/You have always, always been loved.”