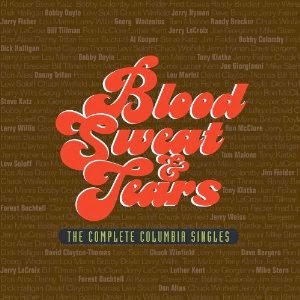 The Complete Columbia Singles contains thirty-two tracks on two discs, spanning Blood, Sweat & Tears’ time with Columbia, from 1968 to 1976. The first disc is full of the stuff I listened to as a kid, such as “Spinning Wheel” and “You’ve Made Me So Very Happy.” The second disc is the band’s later material, much of it without lead singer David Clayton-Thomas.  Most of this stuff is music I hadn’t heard before, and there’s a reason for that. Over all, it’s not quite as good as the early material, but there are still plenty of tracks on the second disc that are worth listening to. The tracks are presented in chronological order.

This collection opens with Al Kooper’s “I Can’t Quit Her,” the band’s first single, and one I don’t recall hearing before. It’s a pretty good tune, with a good rhythm. This song is from the band’s first album, when Al Kooper provided lead vocals. The flip side, also written by Al Kooper, begins with silly animal imitations, then bursts open with the horns, and becomes a kind of fun tune. There is some silliness at the end, including more animal sounds.

“You’ve Made Me So Very Happy”

“You’ve Made Me So Very Happy” is one of Blood, Sweat & Tears’ best tunes. This is when the band I listened to growing up really began. It’s when David Clayton-Thomas took over for Al Kooper on lead vocals, and his voice is an important part of this band’s sound. “I’m so glad you came into my life.” This song reached #2 on the Hot 100 chart.

Its flip side is an odd song. It’s titled “Blues – Part II,” but it actually begins as a wild rendition of Cream’s “Sunshine Of Your Love,” then slides into Willie Dixon’s “Spoonful,” before going into its own blues tune. The song has a good raw power. It fades out, but the track continues with a mellow folk-like instrumental.

The next single is the band’s most famous song, “Spinning Wheel.” This song still has a great kick to it. I’m really fond of the drums on this track, and those great bursts on horn. This is the single version, and so is shorter than the version I’m familiar with. This version has that odd bit of guitar added, and it fades out at one of my favorite moments of the full-length tune. This song reached #2 on the Billboard chart.

Its flip side, “More And More,” has a fantastic instrumental section that totally excites me.

“And When I Die” is a completely delightful song that was a hit for the Blood, Sweat & Tears, reaching #2 on the chart (just as the two prior singles did). This one was written by Laura Nyro. I love the playful nature of this song. “I can swear there ain’t no heaven, but I pray there ain’t no hell.”

Gerry Goffin and Carole King sure have written a lot of great songs, including “Hi-De-Ho,” Blood, Sweat & Tear’s next single. This song has such a great vibe, and is one I’ve always enjoyed. “I’m gonna get me a piece of the sky/Gonna get me some of that old sweet roll.” This single reached #14 on the chart.

“Lucretia Mac Evil” is a lot of fun, due mainly to the horns. The flip side, a reprise of the song, has a great jazzy instrumental section, the horns really driving the song.

The second disc opens with “So Long Dixie,” the band’s first single after the departure of lead singer David Clayton-Thomas. Replacing him on lead vocals is Jerry Fisher. The song opens in a mellow way, with the focus on the vocals. When it kicks in, it’s an odd mix of pop, jazz and country. This song, written by Barry Mann and Cynthia Weil, reached #44 on the Billboard chart.

The flip side, “Alone,” has some excellent and surprising work on horns, and some funky moments on bass. Its instrumental sections far outshine the vocal sections. I wish this had been released as an instrumental. “Alone” was written by Lou Marini Jr., who also contributed “Song For John.” “Song For John” actually is an instrumental track, but it has a meandering quality that really goes nowhere.

Another instrumental is “Inner Crisis,” the flip side to “Roller Coaster.” It begins as a solo on keys, and gets a little weird on guitar before the song really kicks in around the two-minute mark. And then it’s a very cool tune with a certain funky edge. It’s a fun jam that is one of the highlights of the second disc. “Inner Crisis” was written by Larry Willis, who also wrote this collection’s final track, another instrumental tune, titled “Heavy Blue.”

“Got To Get You Into My Life”

The Beatles’ “Got To Get You Into My Life” is a perfect song for this band to cover, and they do a really good job with it. It has a great energy, and this single marks the return of David Clayton-Thomas on lead vocals. The flip side is a playful rendition of Randy Newman’s “Naked Man.”

The Complete Columbia Singles was released on January 7, 2014 through Real Gone Music.

Posted by Michael Doherty at 4:25 PM