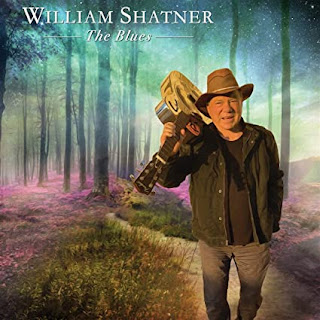 If you are paying attention at all, you’ve got the blues something fierce these days. Things are bloody awful out there, and getting worse every day. But if you’re looking for some relief, some good news amid all this horror and despair, I’ve got it. William Shatner is releasing a new album. Titled The Blues, it features some classic blues material, performed by William Shatner in his own singular way. And he is joined by some excellent guest musicians on these tracks. People like Ritchie Blackmore, Sonny Landreth and Steve Cropper join him on guitar. This album will give us all a welcome respite from the blues.

William Shatner kicks off the new album with a fun version of Robert Johnson’s “Sweet Home Chicago,” on which he is joined by Brad Paisley on guitar. And when William Shatner sings, “Baby, don’t you want you to go back to that same old place,” he is really asking the question. And I love him for it. I can’t help but laugh as he shouts: “Come on, baby, hear me pounding on the door! That’s me!” Yes, the album is off to a great start. That’s followed by Willie Dixon’s “I Can’t Quit You Baby,” with Kirk Fletcher on guitar. What is delightful about his take on this song – and others – is that he never ceases being an actor. He is acting as he sings, taking on the characters of the songs, and inhabiting those characters completely. So in this song, for example, when he sings, “When you hear me moanin’, whoa, you know it hurts way down inside,” you can hear the pain. He is moaning, not just singing about it. I just love how he completely goes for it, even if his voice is getting a bit rough on this track.

One of my personal favorites is “Sunshine Of Your Love,” the Cream song. The music comes on heavy, like you want it to, and then, in some contrast to that, William Shatner delivers the lyrics in a spoken word style that works so well. I believe him when he says he’s been waiting so long. I’ve loved this song since I first heard it in my childhood. This song allowed me to skate through seventh grade. One of my teachers made a reference to it, and my friend Dan and I were the only ones who got it. Everything was just fine from there on out.  On this track, Sonny Landreth joins William Shatner on guitar. Then Ritchie Blackmore plays guitar on “The Thrill Is Gone.” Again, I totally believe William Shatner when he tells us the thrill is gone. There is something intimate in his delivery of this one, feeling almost like a confession of sorts. And there is relief, even some joy, when he repeats that he is free from her spell. And how cool is he when he adds, “all I can do is wish you well”? I’ll tell you: pretty damn cool.  At the end, he riffs a bit. I like when he switches from “‘til the day I die” to “‘til the day that you die.” There is something of an eerie threat in the final line, “My love will follow you.” Look over your shoulder, and there is William Shatner.

I love that he adds “in Montreal” to the opening lines of “Mannish Boy,” singing “Now when I was a young boy in Montreal/At the age of five.” And yes, if you’re wondering, that’s where William Shatner hails from. When he says he is “way past twenty-one,” there is some humor there. There is a lot of humor throughout this track, particular in that section near the end when he sings “Don’t hurt me, I’m old.” That whole section is hilarious. You have to hear it. Ronnie Earl is on guitar on this one. William Shatner does a really good job with “Born Under A Bad Sign.” Yes, this album is pushing my blues away, and for that I am truly grateful. Tyler Bryant is on guitar on this track. “Born Under A Bad Sign” is followed by “I Put A Spell On You.” Halloween is coming, and so it’s the perfect time for this song. This is the track I was most looking forward to hearing, based on the way William Shatner has approached his material in the past, and I was not at all disappointed. This is a fun ride, and he totally gets into it. I love the way he ends this one, stating plainly and firmly, “Because you’re mine.” Leaving no question about it. Pat Travers is on guitar for this one. Then James Burton joins him on “Crossroads,” the Robert Johnson song, and another that Cream recorded. That’s followed by “Smokestack Lightnin’” a song I first heard done by the Grateful Dead. William Shatner, after asking “Why don’t you hear me crying,” is basically sobbing. It’s goofy, and I bloody love it. Joining him not only on guitar, but also dobro and tambourine is Jeff “Skunk” Baxter.

When William Shatner tells us to listen, we listen, and at the beginning of “As The Years Go Passing By,” he so instructs us. It is like he is gathering us around a camp fire to tell us a tale. And who wouldn’t want to go camping with Shatner and hear him tell stories by the fire? Is there a way to make that happen? I mean, once this damn pandemic is finished, of course. I love his vocal delivery. “Oh, you know my ghost will haunt you, baby.” Arthur Adams is on guitar on this track. Then William Shatner is backed by Canned Heat on “Let’s Work Together.” This is the first track that was released, and is what initially got me excited about this CD. William Shatner and Canned Heat. How can things be so bad out there when these guys are working together, and urging the rest of us to do the same? This is obviously a good song to revisit these days. “Together we stand, divided we fall/Come on now, people, let’s get on the ball/And work together/Come on, come on, let’s work together.” William Shatner even adds, toward the end, “Let’s work together now/Now, people, ‘cause the planet needs us.” I assume he means Earth, but this is William Shatner, so it really could be any planet (except the Klingon home world – screw those guys).

William Shatner gives us a totally fun rendition of “Route 66,” featuring Steve Cropper on guitar. It is like Shatner is giving us directions. This is one of my favorite tracks, and is a version that needs to be on your road trip mix CDs. It even has a cha-cha-cha ending. That’s followed by another of the album’s highlights, “In Hell, I’ll Be In Good Company,” a great song by The Dead South, this version featuring Albert Lee on guitar. William Shatner’s spoken word style is bloody perfect here. Like beat poetry, except better, you know? Just listen to the way he delivers the opening lines: “Dead Love couldn't go no further/Proud of and disgusted by her/Push, shove, a little bruised and battered/Oh lord, I ain't coming home with you.” I particularly love the way he sings, “and disgusted by her.” He really outdoes himself here. This might be the album’s best track, actually. I highly recommend checking it out when you have the chance. I found myself applauding just for the sheer joy of it, you understand. The album then ends with “Secrets Or Sins,” an excellent song written by Daniel Miller and Robert Sharenow, and featuring Daniel Miller. This one is a wonderful surprise. Check out these lines: “Now I’m looking into darkness/Still searching for the light/All the loves I’ve had/I still feel them on my skin/I just can’t decide/If they’re my secrets or my sins.” And being who he is, the following lines also stand out: “I stare up at the stars/All the questions still remain/What set it all in motion/All the passion and the pain.”

CD Track List
The Blues is scheduled to be released on October 2, 2020 through Cleopatra Records.
Posted by Michael Doherty at 8:48 AM