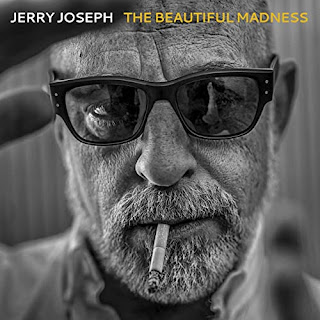 I said this before, but Jerry Joseph is a seriously talented songwriter. The guy can write some damn good lyrics. While he is usually backed by his band The Jackmormons, on his new album, The Beautiful Madness, his backing band is Drive-By Truckers. Not bad company, eh? And Drive-By Truckers singer and guitarist Patterson Hood produced it, as well as had a hand in writing a couple of the songs. The Drive-By Truckers are smart guys, in addition to being excellent musicians, smart enough to know how to support the material without burdening it. They seem to know intuitively what to play, and, perhaps more importantly, what not to play. Jerry Joseph’s voice and his lyrics never fade into the background. All of the material is original, written or co-written by Jerry Joseph.

The album opens with “Days Of Heaven,” which eases in, a light touch, setting a certain mood. And then Jerry Joseph’s voice is one of experience, a voice that is somewhat raw, a voice not shying away from trouble. Things then soon kick in. And talk about fantastic lyrics, check out these lines: “And the wind blows the fire across us like a prairie/Locusts gnaw and the wolves, they howl/As I feel your breath beneath me/Fists and claws, the blood you draw as you make my blood your own.” Little Sue Weaver provides some nice harmony vocals on this track. That’s followed by “Bone Towers,” a solid beat holding things together. “This time of year it seems it only gets darker/So it’s back in the saddle or back in the hole.” Those lines seem to perfectly describe how many of us are feeling these days. This song has a strange, understated power, including in the way Jerry approaches it vocally. “I hear coyotes and hyenas, a cry of mercy and the hard truth/Here in the ruins of the arena, hard love and lost youth.” Then “Full Body Echo” has something of a more cheerful vibe at the start. “I’m confused about location, I’m confused about the year/And all the lovely faces, when I wake, they disappear.”

“San Acacia” has a more melancholy sound at the start. Then the drums come rolling in, almost as if for an attack, an invasion from outside of town, a force coming in from the hills. And then, a minute or so into the track, Jerry Joseph’s vocals come in, the lines delivered as something close to spoken word, “She wakes among the sleeping furs.” There is something wild, not only about the character he describes, but in the telling itself. This is a compelling and engaging song. Jerry Joseph sure can tell a great story, as he demonstrates on “(I’m In Love With) Hyrum Black,” which is told from the perspective of the wife of a Mormon outlaw. “He promised to lay down his guns and follow the book/Well, I’m not a girl so easily deceived/As all that a man says is to be believed.” In the liner notes, Jerry dedicates this song to John Barlow. As you probably know, John wrote some pretty fantastic songs himself. “Good” grabs hold of you too, mainly with its lyrics, right from its first line, “Everybody I know these days talking ‘bout end of times.” Yup, that sounds just about right. A lot of lines stand out, like “We’re calmed by medicines ‘til we can’t even speak” and “Now we’re all on our own, nobody gives a damn/Facing a rising storm, nobody takes a stand.”

“Sugar Smacks” comes on strong, sounding tough, a bit dangerous, more than a bit punk. Then the first line has something about it that makes me smile: “I spend my days reading Chinese science fiction.” And hell, we need that smile, because this song takes us straight into the horrors of our current world, including that goddamn monster in the White House who, if justice existed, would be torn apart by rabid wolves. The song has an angry delivery, which is, I believe, the only appropriate tone to take when addressing the racist jackals and other assorted demons plaguing our reality. This is a powerful and fantastic song that does not hold back. And really, who has time to hold back anymore? We should storm the castle ourselves, with knives in our teeth and fire in our hands. By the way, there is a video for this song that you should check out. “Sugar Smacks” is followed by “Dead Confederate,” which begins with some gentle strumming, easing in, perhaps helping us to relax a bit after the fight. But then we are dropped into a different fight. Or maybe it is all the same fight, who can be sure anymore? Everything seems tied together, and when you speak of Confederate soldiers, how can you keep from thinking of that racist bastard in the White House and all the assholes who stupidly, eagerly support him? This song is about taking down the statues of the so-called heroes of the Confederacy, told from the perspective of one of the statues itself. “Jesus was a white man/And he promised we could rule/So we burn his holy cross in honor.” It is an incredibly powerful song. Jason Isbell plays slide guitar on this track.

I have a theory that 2020 sucks so much because it is actually just a continuation of 2016. We have not yet escaped that most foul of years, and things have gotten even worse because that year has long since expired and so is beyond rotten at this point. That horrible year began with the death of David Bowie, getting the ball rolling, on its way to taking the lives of so many people we admired (including Leonard Cohen, Carrie Fisher, Debbie Reynolds, Prince, Garry Marshall, Paul Kantner, Harper Lee, Merle Haggard, Rob Wasserman, Dan Hicks, Gene Wilder, and Leon Russell). This song is related to that time, its title even a reference to David Bowie’s final studio album, Blackstar, released just two days before his death. But the song is more about Bowie’s influence and his magic. Kyleen King plays viola on this one. This isn’t the only track on this album to mention Bowie. In “Sugar Smacks,” Jerry Joseph sings, “Can I get an amen for David Bowie?” The album then concludes with “Eureka,” a beautiful song of memory and perseverance. “But they took you to the best side of the tracks, the best side of the tracks/And they held you close, they held you tight/And they were never going to give you back.”

CD Track List
The Beautiful Madness is scheduled to be released on August 21, 2020 on Cosmo Sex School Records.
Posted by Michael Doherty at 7:03 AM