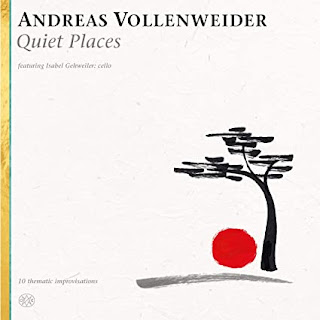 Andreas Vollenweider is a respected and talented composer and instrumentalist known especially for his work on harp. His 1986 album Down To The Moon earned him a Grammy for Best New Age Recording, and on his 1993 release Eolian Minstrel, he was joined on vocals by both Carly Simon and Eliza Gilkyson. His new album, Quiet Places, is his first in more than a decade, following 2009’s Air. On this release, in addition to harp, Andreas Vollenweider plays piano, keyboards, wind instruments and percussion. He is joined by Isabel Gehweiler on cello, and by Walter Keiser on drums and percussion.

The album opens with “Pygmalion,” a gorgeous piece that seems to come from a deeply shared memory, a world a few shades different from the one we are currently occupying, where even its spaces are full and meaningful. There is something romantic and moving in its sound, its textures. Toward the end, it becomes lighter, freer, quicker, engaged in a happier dance that takes place three or four feet from the surface of the planet. That’s followed by “Polyhymnia,” continuing the theme of Greek mythology. As this piece begins, it seems like an energetic and beautiful call to join the music, taking place somewhere magical and yet natural. And then perhaps we pass through a door, and things relax somewhat, though that sense of magic is still present, like a gentle touch from a ghostly, familiar hand. The music builds again, opening up for us. Our eyes are wide, and the music seems to show us a panorama, with greens and yellows. There is a light and magical feel to “The Pyramidians” as well. Then, as we become accustomed to the place the music takes us too, it feels almost more accepting of our presence, like it is adjusting to our being there, incorporating us into the landscape it creates and describes, until we might suddenly open our eyes and find ourselves not at all where we were when the album began. And we find we like the place where we now are, particularly as there is something pretty and cheerful about this piece toward the end.

“Entangled” begins gently, almost tentatively, a conversation between elements who are perhaps just encountering each other for the first time and soon finding commonalities, some beauty in uncertainty. The music then becomes more sure, swelling and entering into an embrace. That is followed by “Come To The Quiet Place,” which in some ways feels more grounded, perhaps because of the percussion. Still, it presents an invitation to relax, to let go, to find some comfort. Not just a quiet place, but a safe place, a friendly place, a place where time perhaps passes more slowly. Then halfway through, surprisingly, a voice enters. It is soft, unobtrusive, but it is noticeable (that is Andreas Vollenweider). The track builds at moments. While the music may relax us, it certainly won’t put us to sleep. And toward the end it becomes more powerful, another surprise. Then “Venus In The Mirror” is lovely and strong, yet gentle. At times it grows more fanciful, and then it concludes almost too soon, leaving me wanting a bit more.

“Bella Smiling” seems to have a stronger sense of character, like a single presence. If we close our eyes, we almost see the person, a welcoming presence, of warmth, and with a touch of curiosity. A voice enters here too, briefly, in the second half. That’s followed by “Wanderungen,” which creates a beautiful place, anchored partly in memory and partly in dream. It is gorgeous, but the beauty is also of things lost. Can we recover them in the realm of this music? Maybe. Then “Sculpture” has quite a different feel and style right from the start, and as it comes together, there is a sort of pop vibe, with a cheerful and even playful element. The album concludes with “Fields Of Blue,” another beautiful piece. This one too has something of a magical, otherworldly feel. Or, rather, it feels like the world we want to be ours, one that is gentle, loving, welcoming. Then suddenly at one point in the second half it takes off like a shot, which is unexpected and exciting. The music soon relaxes again, leaving us in a beautiful spot.

CD Track List
Quiet Places is scheduled to be released on October 2, 2020. It is the first of three new albums that Andreas Vollenweider has recorded.
Posted by Michael Doherty at 7:07 AM