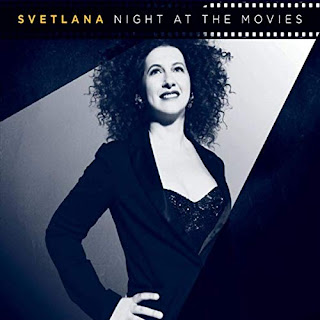 It's interesting to me how closely tied music and film often are. Sometimes a song that we'd heard all our lives will be featured in a film and from then on it is difficult to divorce the film's images from the song. I think particularly of "Stuck In The Middle With You" as it was used in Reservoir Dogs and "Without You" in The Rules Of Attraction. And of course films are responsible for bringing us a great number of original songs, including many that are now considered classics. Vocalist Svetlana Shmulyian, on her new album Night At The Movies, performs some of that excellent material, choosing songs from the 1930s all the way up to current cinema.

This wonderful album opens with "Moonlight," a song from the 1995 remake of Sabrina, where it is performed by Sting. Svetlana delivers a pretty rendition featuring a vocal performance that is warm and gentle. This track also contains some really nice work by Chico Pinheiro on guitar. Svetlana follows that with another song from the 1990s, but one with a sound and style that gives it the feel of belonging to an earlier time, which makes sense, as it is from Dick Tracy, which has a 1930s feel. The song, "Sooner Or Later," was written by Stephen Sondheim and originally recorded by Madonna. Svetlana gives us an excellent rendition. I love her seductive, exciting and yet also sweet delivery of lines like "I'm going to love you like nothing you've known." Oh yes! This track features some beautiful work by Sullivan Fortner on piano, particularly during that instrumental section. Svetlana then really goes back to the 1930s for a rendition of "Cheek To Cheek," here presented as a duet with Wycliffe Gordon. Wycliffe has something of a Louis Armstrong style to his voice, so this track reminds me of that great Louis Armstrong/Ella Fitzgerald rendition of this song. This is a cheerful rendition, particularly because of Svetlana's vocal approach, which is joyful and sweet. Yes, life is good. The instrumental section is so upbeat, so positive that it seems to permanently push away the world's troubles. And I absolutely love the work on horns. Wycliffe, in addition to providing vocals, plays trombone on this track.

Svetlana then moves into the 1970s with "Pure Imagination," a song from Willie Wonka & The Chocolate Factory, where it is sung by Gene Wilder. Here it is given a cool rhythm. Rogerio Bocatto plays percussion on this track. Rob Garcia is on drums. "Wanna change the world? There's nothing to it." Well, let's get to it! Svetlana delivers a beautiful, gentle, dreamlike rendition of "Moon River." It is almost like a lullaby, holding us and keeping away the monsters. This track features some pretty and impressive work on guitar by Chico Pinheiro. That's followed by "Happy," a song I only recently heard because of an instrumental version by Wayne Alpern. The original rendition by Pharrell Williams has a catchy, cheerful sound, but is terribly repetitive (I could take only two minutes of it the first time I gave it a go). This rendition by Svetlana is another duet with Wycliffe Gordon, and has a delicious bit of swing to it. These guys are having a good time with this tune, especially John Chin on keys and Rob Garcia on drums. That wonderful instrumental section keeps the track from becoming repetitive and suffering the same failings as the original. I especially love Wycliffe's work on trombone.

"When You Wish Upon A Star" begins with some nice work on piano by Sullivan Fortner. This rendition has a delicious late-night vibe, with Svetlana's vocals supported by piano. There is an almost magical quality to it, making us think perhaps all our dreams will come true. That's followed by "Watch What Happens," a song from The Umbrellas Of Cherbourg. I like it when this one kicks in, taking on an interesting combination of styles, including that cool rhythm. I also love the way that horn rises out of nowhere as if spontaneously bursting into song. The next couple are songs I wasn't really all that familiar with. First we get "Remember Me," a song from the 2017 movie Coco. I haven't seen that movie yet, but this is a rather pretty song, with more nice work on piano. It is also the most recent composition chosen for this release. "I sing a secret song to you/Each night we are apart/Remember me, though I have to travel far/Remember me each time you hear a sad guitar." Irony Of Fate is another film I haven't seen, and on this album Svetlana performs "No One's Home," singing it in Russian.

I love the song "Smile," from the 1936 movie Modern Times. The music was composed by Charlie Chaplin, and the lyrics were added later. This version Svetlana presents as a duet with her daughter, Isabel Braun. It's a rather sweet rendition, and features some good work by Pasquale Grasso on guitar. That's followed by a pleasant, passionate rendition of "It Might Be You," a song from Tootsie, and then Randy Newman's "Almost There," from a movie titled Princess And The Frog (another I haven't seen, and one I have no intention of seeing). Randy Newman was one of the coolest guys around until Disney put a leash on him and had him declawed. But this is a fun number, delivered with joy and cheer, and I love the horns. Wycliffe Gordon joins her once again on trombone. Svetlana wraps things up with a rendition of the beloved "Over The Rainbow," one of the most famous songs written for the movies. She gives us a cool, jazzy version, her vocals supported by Pasquale Grasso on guitar.

CD Track List
Night At The Movies was released on September 20, 2019 on Starr Records.
Posted by Michael Doherty at 1:08 PM