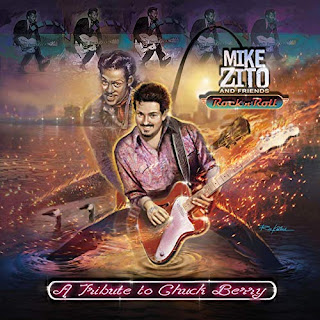 Sometimes I forget just how many great songs Chuck Berry was responsible for. But blues guitarist Mike Zito is here to remind us with his new album, Rock ‘n’ Roll: A Tribute To Chuck Berry, which features twenty famous songs that Chuck Berry wrote (with one exception). Mike Zito, while playing guitar himself on every track, is also joined by guest guitarists on each song. Folks like Robben Ford, Luther Dickinson and Tommy Castro lend their talents to this project. The band backing Mike Zito includes Matthew Johnson on drums, percussion and vocals; Terry Dry on bass, percussion and vocals; and Lewis Stephens on piano and organ. Here is a chance to get reacquainted with some fantastic songs.

Interestingly, the album opens with the song that Chuck Berry did not write, “St. Louis Blues,” an older song that was composed by William C. Handy. This is a song that Chuck Berry included on his 1965 LP Chuck Berry In London. Here Chuck Berry’s grandson Charlie Berry III joins Mike Zito on guitar, which is cool, a great way to start this disc. That’s followed by a lively and delicious rendition of “Rock And Roll Music” that features Joanna Connor on guitar. She has a new album coming out herself, and Mike Zito is a guest on that release. Man, “Rock And Roll Music” is a whole lot of fun, and I’m having a good time revisiting it. We then get “Johnny B. Goode,” one of Chuck Berry’s most famous songs, one the Grateful Dead used to cover fairly often. On this version, Walter Trout joins on guitar, delivering some spirited playing, particularly during that instrumental section. Things are seriously rocking at this point.

Chuck Berry is known for being a pioneer of rock and roll, but he also gave us some fantastic blues tunes. “Wee Wee Hours” is one of those blues tracks, and here Joe Bonamassa joins Mike Zito for a powerful rendition driven by their guitars. These guys seriously jam on this one, and it’s great. That’s followed by the always-fun “Memphis, Tennessee” (here titled “Memphis”) with Anders Osborne. I still remember the first time I heard this song when I was a kid, and being surprised by the song’s final lines. It’s one of Chuck Berry’s best, and this version is really good. We get another tune from Chuck Berry In London, “I Want To Be Your Driver,” featuring Ryan Perry. And then Robben Ford joins Mike Zito for “You Never Can Tell,” a song that is sometimes listed as “C’est La Vie,” a tune that regained popularity after it was featured in the film Pulp Fiction (who doesn’t love that dance scene?). This track is certainly one of the highlights of this release. In addition to some wonderful work on guitar, it features some delicious stuff on keys.

Eric Gales joins Mike Zito for a dynamic rendition of “Back In The USA.” These days you don’t hear a lot of folks saying “I’m so glad I’m living in the USA,” but this song will take you back to the days when it made some sense to say that. That’s followed by “No Particular Place To Go,” one of my favorite Chuck Berry songs. This rendition features Jeremiah Johnson on guitar, and is a lot of fun. Also fun is this version of “Too Much Monkey Business,” which features Luther Dickinson. It is another of the disc’s highlights, and is one to get you dancing and bopping, wherever you may be. I dig the playful vocal delivery. Things then slow down just a bit for a cool version of “Havana Moon,” with Sonny Landreth on guitar.

“Promised Land” is another song that I saw the Grateful Dead perform several times. This is a great, solid rock and roll tune, and this version moves along at a perfect clip. Tinsley Ellis joins Mike Zito for this one, and they both are clearly having a good time with it, and I’d be shocked if anyone listening didn’t also have a good time. That’s followed by “Down Bound Train,” one of Chuck Berry’s coolest songs. Alex Skolnick joins Mike Zito on this bluesy version. Then Richard Fortus joins Zito for “Maybellene,” which was Chuck Berry’s first single and another of his best. This version rocks and features plenty of good stuff on guitar. That’s followed by another great rock and roll song, “School Days,” featuring Ally Venable. I’m not sure I’ve ever heard this one performed as a duet before, but it totally works. “Drop the coin right into the slot/You gotta hear something that’s really hot/With the one you love, you’re making romance/All day long, you’re wanting to dance/Feeling the music from head to toe/Round and round and round we go.”

Both Kirk Fletcher and Josh Smith join Mike Zito for a good rendition of “Brown Eyed Handsome Man.” Then Tommy Castro performs on a groovin’ version of “Reelin’ And Rockin’.” That’s followed by “Let It Rock,” featuring Jimmy Vivino. And, hell yeah, this version certainly does rock. Albert Castiglia plays on “Thirty Days,” another of Chuck Berry’s best songs. This track is a hell of a lot of fun, another of the disc’s highlights. They really let loose here. The album concludes with Chuck Berry’s silliest and most suggestive song, “My Ding-A-Ling,” this rendition featuring Kid Andersen. What an interesting choice to wrap things up. I love it. “Once I was swimmin' across Turtle Creek/Man, them snappers all around my feet/Sure was hard swimmin' across that thing/With both of my hands holding my ding-a-ling-a-ling.”