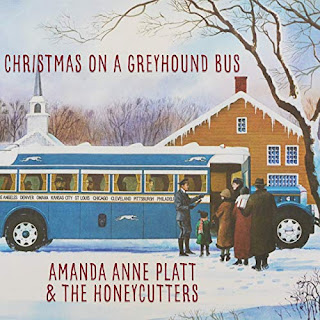 Try as we might to deny it, the holidays are upon us. And so it is time for a new group of Christmas records and CDs to be released. But do not fear, for some of these releases are actually quite good. Such is the case with Christmas On A Greyhound Bus, the new EP from Amanda Anne Platt & The Honeycutters. I was turned onto this band a few years ago, with the release of On The Ropes, an album that featured mostly original material and also an unusual take on Leonard Cohen’s “Hallelujah.” That album was followed by a self-titled disc in 2017, and then a live album. And now we’re treated to this holiday EP, which features a mix of originals and covers. The band is made up of Amanda Anne Platt on vocals and acoustic guitar; Matthew Smith on pedal steel and electric guitar; Evan Martin on drums, keys and vocals; and Rick Cooper on bass, acoustic guitar and vocals.

One thing I appreciate about this album is the choice of cover material. You’ll find no blasted “Rudolph” or “Jingle Bells” here. The disc opens with “Pretty Paper,” a song written by Willie Nelson and originally recorded by Roy Orbison. Willie Nelson then released his own version, using it as the title track to his 1979 holiday LP. Amanda Anne Platt & The Honeycutters’ rendition has a sweet and gentle country vibe, with some nice touches on pedal steel. What I really love about it, however, is Amanda Anne Platt’s beautiful and heartfelt vocal performance. “There he sits all alone on the sidewalk/Hoping that you won’t pass him by/Should you stop, better not, much too busy/You’re in a hurry, my how time does fly.”

The band follows that with an original number, “Christmas On A Greyhound Bus,” the EP’s title track, written by Amanda Anne Platt. There are few places I can think of that would be worse to spend a holiday, or any day for that matter, than a Greyhound bus. But this is a really good song, about leaving a marriage during the holiday and hitting the road. “Now I’m spending Christmas on a Greyhound bus/Drinking tequila from a paper cup/Put all my money on the sun coming up.” They then change gears with a cover of “Santa Looked A Lot Like Daddy,” a tune written by Buck Owens and Don Rich. I’ve been listening to a lot of Buck Owens music lately, what with the release of that ten-disc boxed set The Bakersfield Sound, and I haven’t quite gotten my fill yet. This is a fun, playful number, and Amanda Anne Platt gets the right tone, keeping things a bit loose. There is even a bit of a laugh in her voice at moments, which is perfect.

The band then delivers another original song, “One For The Ages,” a gorgeous and moving song that takes place on Christmas Eve. When people talk about that holiday spirit, this is the kind of thing I imagine. It has a warm and passionate sound. Cuddle up next to the twinkling lights, the fire, or whatever it is that gives you pleasure, that gives you that safe and secure feeling, and listen to this song. Amanda Anne Platt & The Honeycutters conclude the EP with a good rendition of “(What’s So Funny ‘Bout) Peace, Love And Understanding,” a song I’ve always associated with Elvis Costello, but which was actually written by Nick Lowe. It is a song that once again feels timely. If you’re not familiar with it, here is a taste of the lyrics: “As I walk on/Through troubled times/You know my spirit gets so downhearted sometimes/Where are the strong?/Who are the trusted?/Where is the harmony?”

CD Track List
Christmas On A Greyhound Bus is scheduled to be released on November 22, 2019.
Posted by Michael Doherty at 10:33 AM