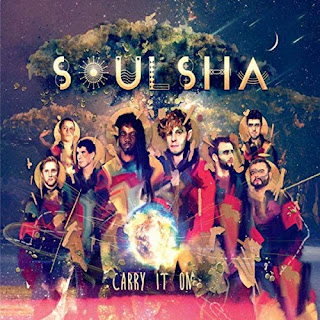 Soulsha is a band that seems to have come from everywhere at once, like it came rushing at us from various corners of the musical universe in order to raise our spirits and strengthen our resolve. The band’s music seems to say, “There is beauty everywhere, enjoy your life, but don’t become complacent.” In these dark days of gun violence and racism and treachery and an extremely divided nation, this band tells us not to give up, and to take great joy in not giving up. The music has Celtic and African elements. But where the band actually comes from is Boston. I’m always excited when folks from my home state of Massachusetts excel like this band does. The band, by the way, is made up of Elias Alexander on bagpipes, low whistle and vocals; Lamine Touré on sabar drums and vocals; Neil Pearlman on piano, organ, accordion, mandolin, banjo and vocals; Conor Hearn on guitar and vocals; Dylan Sherry on saxophone and vocals; Jake Galloway on trumpet and vocals; Charles Berthoud on bass; and Chris Southiere on drums and vocals. Carry It On is the group’s debut full-length release. Alastair White joins the group on fiddle on this album.

The album opens with “Isle Of Skye Reel,” an excellent and exciting instrumental piece. This tune is a wild celebration, combining elements of Celtic music and funk and disco and whatever else seems to strike the musicians’ fancy, taking a traditional number and adding a whole lot to it. It’s like a folk band was dropped into a dance club and was able to adapt immediately and get everyone onto the dance floor, even drawing in people from outside who might otherwise have passed the club by. Then in the middle of everything, there is fun percussion section, which I love. This track is a delight, a fantastic way to get the album going. Then when “Carry It On,” the album’s title track, begins, it sounds like it might be a folk song. But very quickly it takes on a different vibe, a very positive sound, with friendly vocals offering hope and a way through the darkness. “I want to see people making music, being proud of who they are/Proud of where they come from/I want to see people shaking hands with each other/No judgment at all/I want to see people listen to each other, really listen.” And then that wonderful Celtic folk element comes in. The drum beat combines Celtic and African styles. If you need something to lift your spirits (and who doesn’t need just that these days?), you’re going to appreciate this track and this album. Let loose, forget any inhibitions, and just dance – with yourself, with each other. I love that section when the horn and bagpipes listen and respond to each other, a dance of their own. When I hear music like this, it strikes me as impossible that someone like Donald Trump can even exist. Wouldn’t the world of this song destroy him and those like him? Or at least change them? Like a bright ray of light passing through them and negating all their toxicity.

On this disc, there are several tracks labeled “Interlude,” which are short tracks, most of them instrumentals. The first, which follows “Carry It On” and is titled appropriately “Interlude I,” is a percussion piece. The second, “Interlude II,” is a sort of funky groove. The third, “Interlude III” (are you seeing the pattern?) is not an instrumental. It features spoken word over bagpipes. “Where are the voices that have carried us across the generations, across the seas?” “Interlude IV” comes straight out of “Beautiful Line,” and feels like a short extension of one of that track’s musical themes. The final of these short pieces, “Interlude V,” is a cool bass piece, with the sounds of nature in the background.

Things get nice and funky with “Come On Down,” offering more positive, joyous vibes even as it touches on some serious subjects in lines like: “And if a child want to grow right wild eyed, we’d got to give him peace/It’s hard to grow when the guns keep blazing every day in the land of the free/Come on down now, people just come on down/We’ve got work to do, ain’t no use lying around.” I love that this music helps to make us feel like we can be effective, that we can fix things, because often it feels so overwhelming, and we feel ineffectual and powerless. This track also features some delicious work on keys. “We’ve got work to do,” indeed! There is a lot to do, a lot to repair. “Rhythm’s In The Melody” should certainly get you dancing and grooving. My favorite part is that Celtic instrumental section. That kind of thing always makes me smile, pushes my cares away. The track then explodes to another realm to get you dancing harder. “Now let it move, let it move you.”  Just let this music envelope you, lift you up, to the point where you almost lose all sense of self, and become part of the whole flow of the sound.

“Standing In The Water” is a prettier instrumental number, soaring at the beginning, as if at the edge of a cliff as the heavens shine down upon the instruments. Then the tune takes on a greater force, its voice becomes louder, stronger, as if the light is now not shining on the instruments, but shining from them. This is a glorious and beautiful tune. Toward the end, it relaxes a bit for a sweet lead on horn, then rises again. I could do without the sounds of waves crashing at the end, of course, as they seem to detract rather than add anything to this track. The percussion is really what drives “A’Ghrian,” and halfway through, there is a drum solo, so yeah, I fucking love this track. The album concludes with “What A Day,” the horns blast in, announcing the track, lifting us from our seats, and that is just the beginning. Check out that insistent rhythm, the horn flying over it, which gives way to a funkier vibe. What a day, indeed! As this instrumental track continues, it seems to grow in joy.