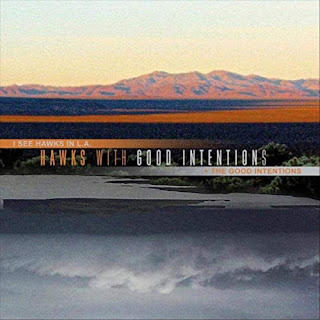 One of my absolute favorite voices in music today belongs to Rob Waller, lead singer of I See Hawks In L.A. There is something so true about the way he delivers a lyric, whether it’s a serious folk or country number that makes you reflect on your own life, or one of those fun (and sometimes funny) lively jam rock tunes, both of which the band does so well. His voice can soothe you, and can energize you. And Rob’s voice is just one of the elements that make the Hawks one of the best Los Angeles bands going. Their harmonies, Paul Lacques’ work on lead guitar, Paul Marshall’s wonderful bass lines, Victoria Jacobs’ grooves on drums, and of course the songwriting all contribute to the group’s great appeal. The band’s new album, Hawks With Good Intentions, finds them joining efforts with The Good Intentions, the British folk and country duo of Peter Davies and Gabrielle Monk. The two groups first met several years ago during The Good Intentions’ first tour of the U.S., and since then have shared the occasional stage. Now they’re sharing songwriting credits. The album features all original material, co-written by members of both groups. It has a somewhat different feel from other I See Hawks In L.A. albums, in as much as it really focuses on the folk aspect of their music. But as some of their sweeter folk and country songs are among my personal favorites of the band’s entire catalogue, I love this approach here.

The album opens with a sweet-sounding and fairly straightforward folk song, “Blue Heaven,” written by Peter Davies, Paul Lacques and Rob Waller. It’s a song about being musicians, and seems to celebrate the friendship between the two bands, with Hawks even mentioned in the first stanza: “Do you remember the times when we used to say/That there was nothing but songs and dreams and days/We had guitars and we flew with the Hawks, and hey/It was blue, blue heaven.” Peter Davies sings lead on this one, and Paul Lacques adds some wonderful touches on dobro. A nice opening number. Rob Waller then sings lead on the following track, “Things Like This” also written by Peter Davies, Paul Lacques and Rob Waller. This is a song in which a highway plays a central role, certainly not an unusual element to Hawks’ music. This is one of those wonderful folk songs that tell a story of a troubled man. Check out these lines: “Neighbors said that he'd been having trouble off and on/Lost his job in China Lake, lost his mind at dawn/Sheriff said there'd only been three murders all year long/Things like this don't happen around here.” I also really like those backing vocals, like witnesses to the story.

Rob Waller and Peter Davies share lead vocals on “Rolling The Boxcars,” Rob’s voice rising and moving right from the song’s opening moments. And together their harmonies are wonderful, particularly with Paul Marshall and Gabrielle Monk joining in. This is one of my favorite tracks, and is the first song that Peter, Paul and Rob wrote together. It touches on some perennial folk subjects, like gambling and jail and being broke, yet still having hope. It’s a folk song you might be singing along with before too long, one of those songs that just feel good to take part in, you know? Raise your voice and join in. “Rolling the boxcars, rolling the boxcars/Find me an angel to bless my bones.” By the way, rolling boxcars means getting sixes on both dice. Gabe Witcher joins them on fiddle on “Rambling Girl,” a pretty song written by Peter Davies and Paul Lacques. Peter’s lead vocals have a gentle and moving quality. “And the only thing he will ever crave/Is a lonely road to an empty grave/And pretty girls like you to lay him down.” This one too features some gorgeous harmonies.

“Steel Rails” is a folk song about trains, and about how time has left the trains behind, though the romantic notion of traveling the rails persists. It is interesting that trains automatically create these wonderful, positive feelings in us, when many of us have never – or rarely – traveled any great distances by train. Songs about trains are always appealing. Will they still be when trains are a thing of the past? Probably. “Steel rails/Still sing their lonesome song/But the times/The times are moving on.” Rob Waller sings lead on this one. Then Victoria Jacobs sings lead on “Hills On Fire,” a song she wrote with Paul Lacques. This one has a gentle, sweet, somewhat mellow vibe, and is about the California fires (which are only going to get worse if something isn’t done about the climate change crisis). Usually a song that mentions sirens singing is referring to mythology, so I like that Victoria delivers a play on that idea in the line “The sirens sing a song for the coyotes in flight,” the sirens here obviously belonging to fire engines. This song features some gorgeous backing vocals, as well as some nice work on guitar. Richie Lawrence adds some sweet playing on accordion on this track. That’s followed by “White Cross,” which has a good, kind of slow folk groove. Rob Waller sings lead on this one. “Good friend, if you’re a gambler/Don’t bet on me too long.”  Paul Lacques really gets a chance to shine on this one, and I love Gabrielle Monk’s backing vocals. “I know the angels love me, even though I did them wrong.”

“Flying Now” is a beautifully sad song, with an optimism one doesn’t necessarily believe. Check out these lines, which open the song: “My bed has been made/With the last of my dreams/I can see a few stars/Through the wind in the trees/I'm flying now.” And I love these lines: “The girl that I loved/She was faithless and cruel/Well, that suited me fine/I'm a natural fool/But I'm flying now.” Peter Davies’ vocals have a gentle yet passionate sound that is wonderful. Richie Lawrence adds more sweet work on accordion on this track. And I really like the bass line, which has a gentle, grounded quality, as if to say, Let him believe he’s flying, I’ll be here to catch him if he actually does. Peter Davies also sings lead on “Epiphany On Town Hall Square.” The line from this one that really stands out for me is “My childhood grips me still,” something I think will hold meaning for everyone. This track also features some good work on lap steel. The album then concludes with “Will You Watch Over Me From Above,” another sweet and beautiful song, this one with Rob Waller on lead vocals. “And why a summer day/To board that westbound train/I guess she couldn't wait for the evening/Sweet summer evening.”