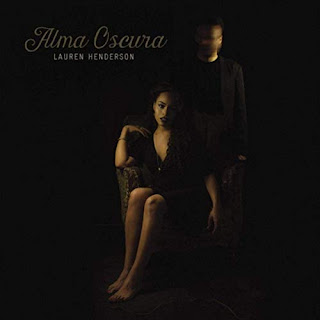 Lauren Henderson is a jazz vocalist and songwriter based in New York. She released her first CD in 2011, a self-titled album that featured some Latin and jazz standards. Her new album, Alma Oscura, features all original material, written by Lauren Henderson, Michael Thurber and Leo Sidran. Some are sung in English, some in Spanish. The group backing her includes Michael Thurber on bass, Sullivan Fortner on piano, Damian Sim on piano, Allan Mednard on drums, Joe Saylor on drums, Moses Patrou on percussion, Tessa Lark on violin, Lavinia Pavlish on violin, Brendan Speltz on violin, Charles Overton on harp, Gabe Schneider on guitar, Mark Dover on clarinet, Emi Ferguson on flute, Jon Lampley on trumpet, Rose Hashimoto on viola and Tara Hanish on cello.

The disc opens with “From The Inside Out,” an absolutely enchanting number. There is something so sexy about Lauren’s delivery. She grabbed me from the moment this song started. And she has plenty of good lyrics to deliver, like these lines: “You burn just like a fire/You cut just like a blade/You walk along a wire/And claim you’re unafraid/When you’ve been profane/And when you’ve been devout/I can feel your pain/From the inside out.” I love the way she holds onto the word “burn” there.  Oh man, how can you not fall for her voice? And then suddenly, her voice gives way to a male vocalist, his voice somehow matching that sexy vibe of hers. That is Leo Sidran, who composed the song. I love the strings backing that section. Then, when I figure, okay, the song can’t get any better, a horn rises from the wind and takes the track to another gorgeous level. The two voices then join together in a duet. This is a wonderful track from beginning to end, certainly a highlight of the album. It’s followed by “Something  Bigger,” a sweet, somewhat fanciful number written by Michael Thurber. It contains some playful lyrics, particularly at the beginning: “Cheeks and eyes, lips and nose/None of these are things I chose.” Yet the song touches on a serious matter, and one that is especially relevant today (when the so-called president used yet more racist language to attack certain women in Congress): “Class and race, hateful names/Those are lies, hurtful games/They are small/They are so petty and small/I am more, I am something bigger.”

“Alma Oscura,” the album’s title track, begins with some pretty work on flute, and features a gorgeous vocal performance. This one is sung in Spanish, and there is something intriguing, compelling about this track, particularly because of her vocals. But also that work on bass functions to keep me enraptured, especially the use of pauses. There are also nice touches on piano underneath that pretty lead on flute halfway through the track. Then “El Arbol” begins with a great explosion of sound. This song, written by Lauren Henderson, has a stimulating rhythm and vibe, and features some excellent work on piano. This one is also sung in Spanish, as is “Ven Muerte,” which follows it. This one has a romantic sound, a timeless sound that is tremendously appealing, especially with the strings. I also love the lead on horn. “Ven Muerte” was written by Michael Thurber, apparently for a production of Macbeth (which, yes, makes me love it all the more).

“Where Are You Now?” is an interesting song that has a somewhat haunting sound at times, and features a mesmerizing vocal performance. “When all the dust has settled/And all your cards are played/Was it worth the price that you’ve paid/It’s too late now/You’ve lost control.” The strings rise up through the mist in a beautiful way. This is another of my favorite tracks. It was written by Michael Thurber. It is followed by “Protocol,” yet another of the disc’s highlights, this one composed by Lauren Henderson. “Protocol” is compelling, building in some unexpected and absolutely wonderful ways, such as when the rhythm is established, and then when the strings come in. Fantastic work there. There is some wonderful stuff on piano as well. This track has a timeless and alluring sound. “Tired and contrite/I repent for every night/Love was molded to hate/And stained our beautiful fate.” The album then concludes with “Dream,” a song with a late-night vibe, Lauren’s voice supported by piano, a perfect closing number.