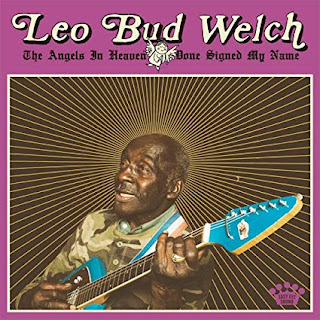 Leo Bud Welch’s story is certainly interesting. The man released his debut album, Sabougla Voices, at the age of eighty-one. The following year he put out another studio album, I Don’t Prefer No Blues, and soon released a live album, Live At The Iridium, before passing in late 2017. Clearly, his story was all but shouting out for a documentary film, and last year we got that film, Late Blossom Blues: The Journey Of Leo “Bud” Welch. Now we are getting one last CD from him, a posthumous release featuring that great combination of blues and gospel that he became known for.  Joining him on this release are Dan Auerbach on electric guitar, bass, piano, drums and backing vocals; Russ Pahl on guitar; Leon Michels on organ and piano; Ray Jacildo on piano, organ, harpsichord, synthesizer and percussion; Dave Roe on bass; Richard Swift on drums and backing vocals. Leisa Hans, Vencie Varnado and Shelton Feazell provide backing vocals.

The disc opens with “I Know I Been Changed,” a tune with a cool, slow blues groove, Leo’s voice deep, honest and true. This is the song that gives the album its title, “Oh, I know I’ve been changed/The angels in heaven done signed my name.” I really like Leon Michels’ work on organ on this track. That’s followed by “Jesus Is On The Mainline,” this version having a great full band sound that threatens to get rowdy, like a party exploding up into the sky, and features some nice work on guitar. Then “Don’t Let The Devil Ride” has more of a blues rock sound, in the same general realm as a band like Cream, and becomes a good jam.

“I Come To Praise His Name” is the song that I most strongly associate with Leo Bud Welch. He used it as the lead track for his first release, Sabougla Voices. It was also the first track on his live album. On both of those releases, it was titled “Praise His Name.” On this new release, he delivers a version with a fuller, slightly more polished sound, but still with that great raw power that I love. That’s followed by “Walk With Me Lord,” a track with a very cool vibe, and a kind of trippy, haunting sound. This is one of my personal favorites. Then there is a more playful approach to “Right On Time,” which has a bit of a country vibe. It’s a fun tune. There is a bit of banter at the end of the track which leads right into the next track, “I Want To Be At The Meeting.” It’s interesting, because it seems like he’s kind of testing the waters on this one, finding his footing, and so there is a loose, gorgeously raw and immediate sound. It’s like we’re present at a rehearsal where everything comes together perfectly.

Leo Welch delivers a good rendition of “I Wanna Die Easy.” It’s always a bit eerie and strange to listen to someone who has died singing about his own death, but of course this song has a positive, uplifting bent, and is not morbid at all. “I want to go to heaven when I die.” Who knows what, if anything, waits for us upon our death? But if there is some sort of heaven, some sort of afterlife, I have to imagine that Leo Bud Welch is there singing some glorious blues and making the angels smile and sing backup for him.

I’ve always loved “This Little Light Of Mine.” I don’t think I’ve ever heard a bad version of this song. Leo Welch’s rendition, titled “Let It Shine,” is a cool, groovy bluesy adaptation. “Up and down the road, I’m gonna let it shine/Let it shine, let it shine, let it shine.” The disc then ends with “Sweet Home,” a short number featuring Leo’s voice accompanied by just his own guitar and by Dan Auerbach on slide guitar. It seems like a good choice for a final track to his final release. “Before this time another year/I may be dead and gone/But I’ll let you know before I go.”

CD Track List
The Angels In Heaven Done Signed My Name is scheduled to be released on March 8, 2019 through Easy Eye Sound.
Posted by Michael Doherty at 12:32 PM