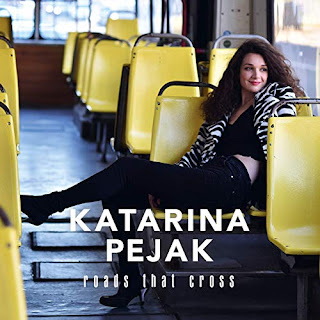 Singer, songwriter and keyboardist Katarina Pejak was born in Belgrade, and began performing in that city and other areas of Serbia while still in her teens. Then in 2011, she came to the United States after getting a scholarship to the Berklee College of Music. She divided her time between the U.S. and Serbia, and released a few albums in Serbia. Now she is based in Nashville, and has recorded her new release in Texas, employing musicians like guitarist Mike Zito, who also produced and mixed the album, guitarist Laura Chavez, bass player Lonnie Trevino Jr. and drummer Damien Llanes. Roads That Cross features mostly original material, music that encompasses elements of jazz, pop, and rock, as well as blues, the musical genre for which she is known.

The album gets off to an absolutely fantastic start with “Nature Of My Blues,” a tune that has a seriously fun vibe, with a bit of a 1960s thing happening. And check out these lyrics: “She taught me how to act just the way I feel/I get all kinds of crazy/That I ain’t afraid to show.” I also really appreciate these lines: “So don’t say nothing if you’ve got nothing to say/I ain’t looking for a reason to cry.” This one was written by Katarina Pejak and Mike Zito, and is a delight. It’s a lead track that will likely cause you to fall for her. It certainly had that effect on me. From a song with the word “blues” in the title, Katarina Pejak moves to a song that has a good blues groove, “Sex Kills,” the first of the album’s covers, this one written by Joni Mitchell. It was originally included on Mitchell’s Turbulent Indigo, released in 1994. Katarina’s rendition features some good work on keys. The line “kids taking guns to school” (“little kids packing guns to school” in the original version) is sadly more pertinent now than it was in 1994.

“Moonlight Rider” establishes a good groove, which I dig. But it is Katarina’s vocal performance here that really grabs me. There is something sexy about her delivery, and her voice seems to comprise the blues, country and soul. “I’m the wind blowing from afar/In your bones and in your eyes/Feel the rush between your thighs.” This is one of my favorite tracks, and it’s followed by another of the disc’s highlights, “Old Pain,” a song she also included on her 2016 release, Old, New, Borrowed & Blues. This wonderful song has a classic rhythm and blues sound that I love, a vibe that always works for me. It also has a lot of soul. And its first lines are excellent: “If I were to say/I’ve never been this happy, I would lie.” I love her vocal performance here, her voice is full of honesty, without a need to sell any of the lines. It’s a beautiful performance. “Something ‘bout a first love/You can never get out of your head/No, you can’t/It takes from the next love/Leaves you counting off the days for it to end/And you get that old pain.”

The album’s other cover is “Turtle Blues,” a song written by Janis Joplin that was included on Big Brother & The Holding Company’s 1968 LP, Cheap Thrills. This track has a good blues groove, and features some delicious stuff on keys. That’s followed by “Down With Me,” an interesting track. It’s blues, but the rhythm on the guitar has a bit of a reggae vibe. And check out these lyrics: “I ain’t looking to be saved/That twinkle in your eye/Ain’t my cross to bear/So if you see me coming/Close the door/And if you see me falling/Let me hit the floor.” Those are some damn good lines. “She’s Coming After You” is another song that was previously included on Old, New, Borrowed & Blues, and is another of my favorites. It is delicious and sexy and jazzy, and features an excellent, enticing vocal performance. “I can only hope she stumbles/‘Cause she’s coming after you.” Then the disc’s title track, “Roads That Cross,” has a cool vibe, and is a strangely pretty blues song. Katarina Pejak can certainly write some memorable lines, a standout from this track being “We were stripped down to the pain.” The album concludes with “The Harder You Kick,” a blues song about trying to get rid of the blues even if it seems a futile endeavor, Katarina’s voice supported just by some cool work on keys. “So the harder you kick, the deeper you sink/And the more you resist, the deeper the ditch/The harder you kick, the deeper you sink/In the quick sand, baby.”

CD Track List
Roads That Cross was released on February 15, 2019 on Ruf Records.
Posted by Michael Doherty at 9:31 PM