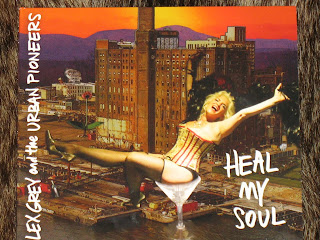 I really didn’t know what to expect when I put in Heal My Soul, the new CD from Lex Grey And The Urban Pioneers. I wasn’t at all familiar with their music, so all I had to go on was the cover, which features a sexy woman seated in a large martini glass in front of a rough, odd, and dirty city scene, with certain items in bizarre and exaggerated proportions, as the sun sets (or perhaps rises?) behind her. The woman seems to be having a grand time, and so the title seems almost out of place. This woman needs no healing. Unless her posture and joy are all an act? I had planned on listening to just a few tracks to get a taste for the music (with the idea that I would return to the CD in a few days), but I was immediately drawn into the world of this band, in large part because of Lex Grey’s voice, which commands attention, in both upfront and sly ways. And there was no way I was going to be able to stop the CD before the end. Heal My Soul quickly became one of my favorite CDs of 2016.

It opens with “Factory,” a strange, cool bluesy rock number about wanting to live in a factory. Right away, I’m kind of intrigued by this woman, as she sings, “I want to live in a factory/I don’t care what it used to be/With metal doors and concrete floors.” Sure, it’s about having a lot of space, but clearly there is something else twisted at play here. After all, she sounds excited as she sings, “And urinals hanging on the walls” and “And a drain in the center of the floor.” And what will she do with the “antique machinery” that she sings about? I want to find out. I want to go live in this factory with this unusual woman, but first let a few close friends know of my whereabouts in case I’m not heard from again. It all adds to up to a great song. Plus, there are nice touches by Walter Tates Jr. on saxophone.

Lex Grey then turns toward folk and country for an equally odd and delightful tune, “Hobo Soup,” which is about working together to feed people. And as she sings, “From a rooftop of the city to the chicken coop/Everybody needs a little hobo soup,” it seems to also be about the need to be humbled. Kaia Updike is on violin, and Brian Dewan is on accordion. And there are chicken sounds on the track. So there.

“Ghost” is a rock song sung to a ghost, or to someone who might be a ghost. Check out these lyrics: “Are you lost or afraid/Will I see you again/Are you stranded/Hold my hand and/Tell me I’m not abandoned.” Those male backing vocals are unexpected and odd in their own way. I imagine Lex Grey’s voice surrounded by enslaved, doting spirits, minions. There is something dark here. Hers is the kind of voice I want to submit to, let it have its way with my flesh, with my soul, with whatever bits interest her. We could all easily become her backing vocalists, her spirits. And then near the end, there is the addition of fiddle. Holy hell, this song just gets better and better, more and more powerful.

“Quiet Place,” the next song, comes as a surprise too, with its relaxed, sweeter feel. Plus, it’s the album’s sole cover, a song written by Jaik Miller. But whatever journey Lex Grey wants to take me on, I am game. There is something almost haunting about this track, and I’m really drawn into it. Lex Grey And The Urban Pioneers do an excellent job with this song. “Blues All Around” then slowly creeps in, which is quite fitting for the opening line, “Waking up in the morning, those crazy thoughts in my head,” like the song itself is reluctantly coming to, opening its eyes. This is a quiet blues number, and it is effective. And with “Survive,” this group and CD continue to be impressive and surprising. Lex Grey’s is an unusual voice, an unusual perspective, and I am fascinated. Check out what she does vocally on this song, with Alison Davy joining her. Wonderful!

Then the band delivers a playful, old-time number, “Junkman,” which – because of everything that’s come before it – also comes as a surprise. And I love it.  Though I admit I am a bit on edge at first, paying close attention, in case she suddenly sneaks a knife into my side or something. But no, this is just a delightful tune, with excellent use of backing vocals, and some great stuff on clarinet by Anthony Michael. “I could spend all night just digging through your treasures.”

“Black Stallion” is a sweet-sounding country number, and then “Lightnin’ (In A Jar)” is a country rock song, though the way “lightning” is repeated reminds me of the end of a certain song from Grease. These two tracks are good, but aren’t as intriguing as the rest of the album. The CD then concludes with its title track, “Heal My Soul,” which begins with a good groove and soon adds some sweet saxophone before Lex Grey’s vocals come in. She sounds so sexy and smooth, and of course doesn’t wait too long before getting wild. “Turn your light on bright for me/Heal my soul/You’ll never catch the midnight train/Running face first into the hurricane/Oh, can you hear me moan?” Lex does so much with her voice on this track, at times delivering a near-snarl, other times sounding sweet and soothing. This is an excellent song, with several lines standing out, like “We’re just two people trying to get somewhere” and “I can walk through the water in my high-heeled shoes.” And it becomes a good jam.

CD Track List
Heal My Soul is scheduled to be released on September 12, 2016.
Posted by Michael Doherty at 7:49 PM