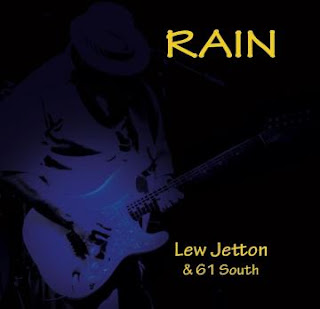 Lew Jetton & 61 South have been playing the blues for more than twenty years. Their new album, Rain (the band’s third CD), contains mostly original material written by Lew Jetton. The title Rain seems like a perfect title for a blues album, as inclement weather often gets folks down; plus, there are three songs with “Rain” in their titles (interestingly, two of those are the CD’s covers). But beyond that, it has another, somewhat humorous significance. Lew Jetton (in addition to being a blues singer, guitarist and songwriter) is actually a meteorologist. Is Rain a prediction? We could certainly use it here in Los Angeles. But until then, we can just enjoy this album. It may very well suffice. The band comprises Otis Walker on bass, Erik Eicholtz on drums, Sam Moore on guitar, Dan Bell on keyboards and guitar, and James Sullivan on bass.  Joining them on various tracks are several guest musicians.

The first track, “Who’s Texting You,” opens with a little computer sound, as if letting us know a message has come through. I hate the use of “text” as a verb (unless it’s the old sense of writing in large letters), but it’s interesting when the blues tackle modern technology, modern troubles. Though of course behind that is the traditional blues theme of an untrustworthy woman (or at least a distrusting man). The “disconnect” line (“I think it’s about time we disconnect”) had me laughing out loud. I love the play on the word, the double meaning. Alonzo Pennington joins the band on guitar on this track.

That’s followed by “Move On Yvonne,” a fun, rocking number in which he’s basically telling a girl to, well, move on. At one point early in the song, Lew sings, “Yvonne, you’re crazy.” (Ah, you can insert any woman’s name there, and it will still be accurate.) Then surprisingly, partway through we get the woman’s perspective (that’s Miranda Louise on vocals). And, even more surprisingly, she immediately admits, “I’m crazy.” (Though of course it’s a man who wrote the line.) This track features some cool work on harmonica by J.D. Wilkes, as well as some absolutely delicious work on keys. J. Solon Smith plays piano on this track.

“Mississippi Rain,” the first of three tracks with “Rain” in the title, is a heavier blues song. J.D. Wilkes plays harmonica on this one too. Lew Jetton turns to gospel for “Glory Train,” a track featuring a clip from JoAnn Green’s gospel radio program. This is an energetic number, featuring Alonzo Pennington on guitar and Miranda Louise on vocals. It’s a really good tune, but probably my favorite is “Sandy Lee.” It’s a groovy blues number featuring more great work by J. Solon Smith on piano. “Every Thursday morning/Before the rent man knocks/I need you to come around/And put the money in my box/Sandy Lee, Sandy Lee/You’ve got the money that I need.” Ah yes, true love! This song is just so cool, and so fun.

The first of the CD’s two covers is “Feels Like Rain,” written John Hyatt. This is a good rendition, with an excellent vocal delivery by Lew Jetton. Sam Moore plays guitar on this track. The other cover is Allen Toussaint’s “It’s Raining,” which concludes the CD and is for me another of the disc’s highlights. This is another track that boasts an excellent vocal performance by Lew Jetton. His vocals really shine on this one, and he is accompanied by J. Solon Smith on piano. “This is the time I’d love to be holding you tight/I guess I’ll just go crazy tonight.”

CD Track List
Rain is scheduled to be released on August 8, 2016 on Coffee Street Records.
Posted by Michael Doherty at 7:14 PM