All Things Must Pass DVD Review 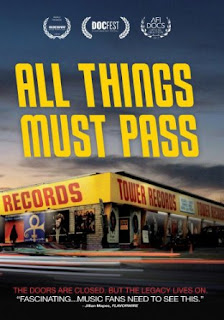 As a music fan, I find the demise of record and CD stores troubling, to say the least. These stores aren’t just great sources of music, but also places where music fans can meet and learn from each other about bands, share information in a truly social way (so-called “social media” are not actually social). These stores are about community as much as about product. I’ve bought albums based on strangers’ recommendations in a store; I’ve also had strangers buy discs I’ve recommended (and at least one friendship began with such a recommendation). Tower Records, at its height, was such a giant chain that it might have felt less personal than some smaller stores, but that sense of community was there. And now, a decade after the last U.S. store closed its doors, All Things Must Pass recounts the story of Tower Records, its beginning and growth as well as its end, and focuses on that sense of community, particularly among those who worked for the company.

The documentary opens with a title card telling us, “In 1999, Tower Records had sales of over one billion dollars.” That is followed by another title card, “Five years later, they filed for bankruptcy.” At the center and heart of this film is an interview with Russ Solomon, founder of Tower Records. He talks about his own passion for music and about the creation of Tower Records. Interestingly, it started in his father’s drug store, Tower Drugs, which had a jukebox and where used (and then new) records were sold. The record section expanded to the point where Russ ran it as a separate store. And eventually Russ happened upon a large store for lease in San Francisco. That was the beginning of the expansion of the business.

Many employees who rose through the ranks share their personal experiences, and they all stress the sense of community, of family they felt while working there. Stan Goman mentions another benefit was getting to play whatever music he wanted on the store’s record player. “So you could be an amateur DJ too.” Russ says he believes one key to the store’s success in the early days was that there was no dress code for employees, so people wanted to work there. What is striking is the passion these folks feel not only for the music, but for the business.

There is a lot of material on the store’s expansion, including interesting stuff about the first Tower Records in Japan (which occurred before the store moved to the east coast of the U.S.). And there is material on Pulse! (the Tower Records magazine). And then, as you might expect, the documentary delves into the problems the business began facing – from other types of stores (such as Target and Best Buy) selling CDs, from people being able to get their music online for free, and so on. And those interviewed talk about being fired. I was actually tearing up a bit before the end of this film.

This film isn’t just about Tower Records, but about the music business in general, and the changes it’s gone through, from the shift in focus from singles to LPs, to the change from vinyl to CDs and then to digital. And it doesn’t just include interviews with employees, but also others in the music business, such as Dave Geffen, as well as musicians, such as Bruce Springsteen, Elton John and Dave Grohl. Bruce Springsteen says, “There was the thrill of being surrounded by music,” and also talks about how there is that family aspect, how everyone in the store is like your friend for a little while. Elton John recounts how going to Tower Records first thing in the morning was part of his daily ritual. The film includes footage of Elton making purchases. (There is also audio of John Lennon promoting Tower Records.)

All Things Must Pass was directed by Colin Hanks, and is scheduled to be released on DVD on September 13, 2016 through MVD Visual. The DVD contains no special features.
Posted by Michael Doherty at 2:36 PM