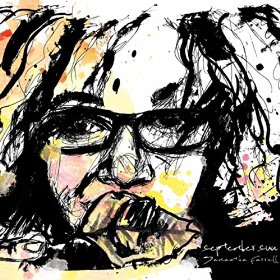 Music has always played such an important role in my life, and I love getting turned on to new artists. It’s like opening up a new section of the world that I wasn’t previously aware of. And that’s how I felt when I first heard Boston singer/songwriter Samantha Farrrell’s new album, September Sun. It’s an excellent disc, on which Samantha combines elements of folk, pop and jazz, creating a wonderful sound, with her voice at the center of these tunes. And they feature some excellent songwriting. Check out these lines from “Long Night Coming,” for example: “There's no such thing as rock bottom/That darkness knows no depth/It likes the taste of you/And wants you as its pet/Where there is a hunger/That no man or food can quell.” All tracks were written or co-written by Samantha Farrell. In addition to lead vocals, Samantha plays flute and acoustic guitar. She also has some talented Boston area musicians backing her on these tracks, including Michael Valdez, Matt Murphy, Ryan Fitzsimmons and Danielle Miraglia.

The CD opens with its title track, “September Sun,” which begins as a beautiful, sweet and intimate folk song. And then the chorus has some pop elements, with good backing vocals by Ryan Fitzsimmons and Danielle Miraglia. Ryan Fitzsimmons also plays acoustic and electric guitars on this track, and Laurence Scudder plays viola. “I see the way the light hits your face/Shadows strong enough to leave a trace/A mortal's taste of eternity/September sun.” That song is followed by “Heavy Hangs The Crown,” the title of which calls to mind a line from Shakespeare’s The Second Part Of King Henry The Fourth: “Uneasy lies the head that wears the crown.” In this song, Samantha sings “You don't know a thing/About the trouble that I bring/Fall without a sound/Heavy hangs the crown.” She is joined on vocals by Erik White, who also plays acoustic guitar. Keith Van Tutt II plays cello on this track, an instrument I am always happy to hear. It’s interesting that Samantha opens the first two tracks on this disc with a line about something hanging heavy. In “September Sun,” the opening line is “All the world hangs heavy on the vine.”

“Lover’s Prayer” has something of a late-night jazz feel, which works perfectly with the lyrics. “And I don't want to sleep/Because that would be easy/I don't want to dream/Because it always brings me/To you.” She is accompanied by Mario Castro on saxophone, the instrument working almost like a second voice, a lonely late-night duet. Keith Van Tutt II plays cello on this track. “Lover’s Prayer” was written by Samantha Farrell and Michael Valdez, who plays piano. It’s followed by the only other track to have been co-written, this one by Pete Durning, who plays acoustic guitar on it. “Like A Leaf” has a lighter feel, and I like these lines, which end the song: “Oh my love, been waiting/For the light to change/For my life to change.” We can all relate to that idea, can’t we?

As good as these tracks are, for me the album starts to really get going with its sixth track, “Circles.” I love the combination of jazz and folk on this track. It has such a cool vibe, due in large part to Matt Murphy’s work on upright bass, plus some nice stuff on keys. There are even finger snaps. And check out these lines: “We spend our lives thinking in lines/Progress, a forward march through time/Always losing or winning/The serpent's tale is in its mouth/There's no way in, there's no way out/You wonder why and I'll keep spinning.” I love the way Samantha delivers these lines, there being something both close and playful in her voice. And then there is an interesting change in the second half of the song. Laurence Scudder plays viola on this track. That is followed by another of my favorites, “Song For Somnus,” which again has a great jazzy groove, with Matt Murphy on upright bass. This is just absolutely wonderful, and I love the piano. “My mind is playing tricks on me/And I can't get to sleep.”

“Tuesday Night” is another with a late-night jazzy vibe. Here are some lyrics many of us can relate to: “Working late again/On a Tuesday night/And the train's running late/She'd rather walk than wait/Feeling trapped inside/An accidental life/Still behind on the bills/Is this how life's supposed to feel.” But this song is also about the positive, magical effect of music, and I love this line: “On a Tuesday night/A certain song can save your life.” Mario Castro plays saxophone on this track, and Ahmad Hassan Muhammad is on keys. Samantha Farrell concludes this CD with “Some Crazy Dream,” a pretty folk song that feels like a reaching out to the listener. “You find out the hard way down/That no one really cares/A thousand fathers of success/An orphan when you fail/An embarrassment of riches/ To have someone waiting there.”