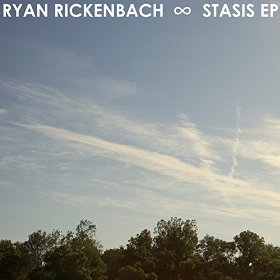 The story behind Ryan Rickenbach’s debut CD, Stasis EP, is an unusual one. Ryan started with music in his teens, but then turned to acting and moved to New York to pursue it as a career. Interestingly, he got a role in a musical titled Folk City about the music scene in 1960s Greenwich Village, and his preparation for that role, which included playing at small clubs, led him back to music. A description of the character he played, Brian McNamara, reads in part (from a casting notice): “Tall, lean, handsome country-folk guitar player/singer/songwriter from Oklahoma. He is a kind, rock-solid All-American type; arrives on Village scene driven to achieve success.” Apparently, he really identified with his character, and once the show closed he continued performing. And this led to the recording of his first CD, Stasis EP, on which he (like his character) plays guitar, sings, and wrote all the songs. He also plays harmonica. Joining him on this release are Cass Dillon on guitar and bass, John Badamo on drums, Robert Damato on keys and Craig Calo on bass. Cass Dillon also produced and engineered the tracks.

The CD opens with “Huck Finn,” which begins with a kind of classic, laid back country rock vibe. Seriously, you could place song this alongside some of the best of that early 1970s stuff, and it would fit well, Ryan’s voice having just the right quality as he asks, “Will I find you in the cold?” And then the louder sections have a more modern feel. “And some days I come to find/That the answers to my mind/Drift away with the snow/So it goes.” That’s followed by the title track, “Stasis,” which leans more toward rock in its energy. “I wish I knew what, I knew what to wish for/How about a reason to peel myself off the floor.”

“Solitude” has a sweet folk sound, just vocals and guitar, and is one of my personal favorites. Here is a taste of the lyrics: “Solitude/There is no other lover/You’ll carry me out of this world/You toil, you wait and waste all your time/While the eyes in the mirror say you're losing your mind.” Not bad, eh? And then “No Good Thief” is a playful, delightful, humorous song with a fun vibe. The lines “I don’t beg/I don’t borrow/I just steal” had me laughing aloud the first time I listened to this disc, and have made me smile each time since. I also really like these lines: “I will kiss your hand/And you will laugh/And then you'll know/How truly low low low/I can go.” This is another favorite of mine.

Ryan Rickenbach concludes the disc with “Faith,” which begins as folk, with guitar and vocals. Listen to the way he sings the word “Faith,” really digging into it, lifting it up, and holding on. The drums that then come in nearly two minutes into the song give it a strong, intense pulse that pulls you in farther. Ryan takes a risk near the end by reaching toward a sort of falsetto, but it works. This is a really strong track. “Shake all the hands/Of all the men/I used to be.”

CD Track List
Stasis EP is scheduled to be released April 1, 2016 on A-Frame Records.
Posted by Michael Doherty at 10:05 PM